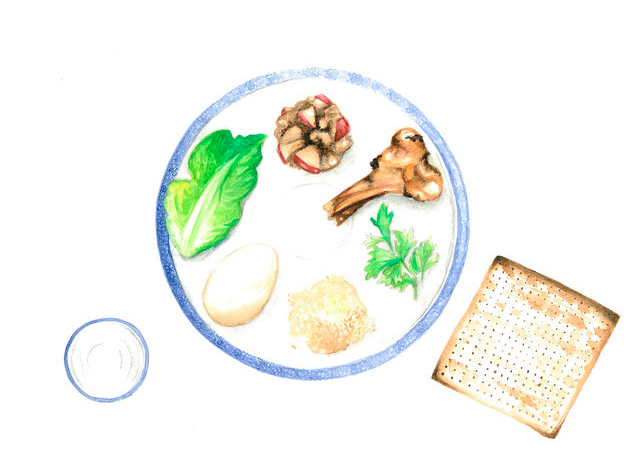 Very few meals are centered around ideas that require thoughtful thinking and honoring ancient traditions. At the Seder Meal, these ideas are the reason why Jewish families gather.

The Seder Meal is a tradition celebrated by people of the Jewish faith during Passover. The meal consists of rituals, liturgy and food meant to represent parts of the Exodus story where the people of Israel were led from slavery in Egypt to freedom in the Promised Land. But, the story of the Exodus is only the groundwork for deeper discussion of slavery and freedom in today’s world that exists in the meal.

Michael Helfand, director of the Glazer Institute for Jewish Studies at Pepperdine, said the ritual, liturgy and food of the Seder Meal point to the meaning of the central story.

“At its core, it’s a reenactment of the Exodus story,” Helfand said. “The overarching theme is the slave people of Egypt finding freedom through the Exodus.”

The Seder plate contains six different foods: matzo, a green vegetable, a lamb shank bone and haroset, which is a mixture of apples and cinnamon, bitter herbs and an egg.

Helfand said the foods on the Seder plate are “pieces of the Exodus story.”

“In the Seder plate, each food is meant to tell the story. You’re supposed to repeat [the significance] and convey the story to the next generation.”

The foods are eaten in a specific order that correlates with the Exodus story, said Helfand.

The Seder Meal developed as a new ritual to celebrate Passover and recall the Exodus story after the destruction of the second temple in 70 C.E, according to Rabbi Ari Schwarzberg, Pepperdine’s rabbi in residence.

“In the Bible, Passover was marked by the sacrifice of the lamb, which would be done in the temple,” Schwarzberg said. “However with the destruction of the second temple in 70 C.E., they had to adjust the tradition.”

Schwarzberg said that over the next hundred years, rabbis created the Passover meal to replace the original lamb sacrifice.

“The Seder Meal incorporated symbols, rituals and liturgy that would serve in place of the sacrificial lamb,” Schwarzberg said. “If it’s run properly, liturgy is a means of making discussions about slaveries that exist today and the responsibilities of free people.”

Schwarzberg said the earliest texts about the Seder Meal show that the rituals and symbols were made so that children could ask questions.

Fifth-year MBA candidate Rena Ohana explained how important Passover is to her Orthodox Jewish faith and her family.

“It’s considered one of the most important holidays,” Ohana said. “We have to be together for it, and we want to spend it together. It’s very family-oriented.”

“When I was younger, I thought this holiday celebrates that we’re not slaves now in context of the Exodus story,” Ohana said. “Now, I don’t just see it in context. It’s not just applicable to olden or Biblical times; it’s relevant now. We were freed, and we still are free.”

Although the Seder meal has roots in the past, Helfand said it addresses issues that exist in the present.

“The Seder meal addresses contemporary issues of slavery, or the slave mentality, and freedom in the 21st century,” Helfand said.

The idea of freedom is a central motif of the meal, according to Schwarzberg.

“Seder is not just a checklist of rituals,” Schwarzberg said. “It encourages discussions of meanings of freedom: What does it mean for us today?”

The main symbols of the Seder meal are four cups of wine, matzo bread and the bitter herbs, according to Schwarzberg.

The first part of the Seder Meal begins with the wine, according to Helfand. The leader says a blessing over the wine and then explains the significance of the night.

“The four cups of wine that are drunk throughout the meal represent the four languages of redemption,” Helfand said.

The four languages of redemption are also known as the Four-fold Promise of Redemption that God promised Moses and the nation of Israel in Exodus 6:6-7, according to chabad.org. The four promises are “I will bring you out from the suffering of Egypt,” “I will save you from enslavement,” “I will deliver you” and “I will take you for me as a Nation, and I will be for you, the Lord.”

After the blessing, the meal starts with a cup of wine. Schwarzberg said another tradition is to lean while drinking wine, which adds emphasizes the symbol of wine as freedom during the meal.

“When we drink wine, we lean — which is an ancient symbol of freedom and wealth,” Schwarzberg said.

In the next part requiring the foods on the plate, partakers dip the green vegetable in salt water to symbolize the bitterness of the slave experience. Helfand said that in his experience, this is when “kids ask you about it.”

A later part in the meal requires the bitter herbs, which are known as “mahror.” They also represent the slave experience, according to Schwarzberg.

The next part of the plate used is the three pieces of matzo bread. Matzo bread is one of the oldest components to the meal, according to Schwarzberg, because the bread was eaten by people in the Exodus story.

“Matzo, which is unleavened bread, represents how the Jewish people left Egypt in a hurry,” Schwarzberg said. “It was also thought of a ‘poor man’s bread.'”

The last two items on the plate, the lamb shank bone and the egg, symbolize two sides of the Passover sacrifice.

“The lamb shank bone symbolizes the Passover sacrifice and how God extended his arm to the Jewish people,” Helfand said.

The egg, meanwhile, exists as a celebratory Passover sacrifice and how the Jewish people were free from paganism, according to Chabad.org.

“One nice tradition in Jewish communities is to add a fifth cup of wine to highlight a women’s role in the Exodus and to stand as a symbol of feminism today,” Schwarzberg said. “It’s called the Cup of Miriam, and it’s just placed in the middle.”

Although stricter communities celebrate Seder only among their families, or people of the Jewish faith, Schwarzberg said that the majority don’t follow that.

“The first thing recited in a Seder Meal says that anyone who doesn’t have a meal should come join,” Schwarzberg said. “The ability to invite others to table is a sign of freedom.”

Celebrating Seder is a big deal for her family because of how it brings them together, Ohana said.

“Passover in general is the holiday for my family,” Ohana said. “I look forward to it every year to catch up with everyone in my family and celebrate freedom.”

Celebrating freedom has become more important to her in the context of today’s world, Ohana said.

“To be Jewish in this day and age is not the easiest,” Ohana said. “But this meal reminds us that we can be free in America.”