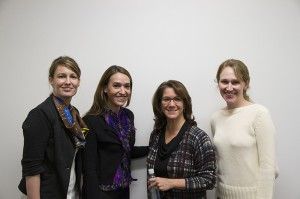 Students often have big dreams on graduation day, from changing the world to achieving the highest level of success in their career field. However, it can also be a stressful time as graduates search to find their niche in the job market. As alumnae Courtney Branch and Lindsay Carron of Board Well illustrated at the Nonprofit Leadership Speaker Series, it is entirely possible to create your own.

Board Well was created by self-proclaimed “art activists” Branch and Carron, who graduated from Seaver College in the spring. The two artists paint designs onto the backs of surfboards and skateboards, and a portion of the proceeds is donated to a nonprofit organization.

“We were inspired by the surfing culture,” Carron said. “And the surfboard is an iconic symbol of Southern California.”

Board Well offers the possibility of buying a classic wooden board that Branch and Carron carve and design themselves, as well as a real long or short board. They also offer the option of having personal boards customized. All of their designs are hand-painted.

Branch and Carron told their story in the Fireside Room on Tuesday, as the third presentation in the Nonprofit Speaker Series hosted by Pepperdine every year.

Their story began at Venice Beach, when the two alumnae decided to take their hand-painted boards down to the Boardwalk to sell. To their excitement, they received enthusiastic feedback and interest, and the idea of starting a custom design surfboard business was born.

However, they were also moved by the poverty they saw around them. “We decided to take it further,” Carron said. “We wanted to make a point with our art, and help others.” Thus Board Well was created.

“Our mission is to use art as a platform for change,” Branch said. The duo is now partnering with the nonprofit Wishing Well, and 15 percent of their proceeds are donated to the organization.

Wishing Well aims to bring clean water to impoverished communities through the development of sustainable wells. Branch and Carron created a series of boards with water themes specifically for the organization.

They have also been working with the Pepperdine Microfinance club, and have created a customized board for them as well. Board Well hopes to add many more nonprofits to their partner list in the future.

Board Well has been present at multiple art crawls in Los Angeles, and the duo painted live at the 27th annual Abbot Kinney Festival in Venice.  They were also featured at the internationally recognized LA Fountain Art Fair, described by The Economist as “the way an art fair should be.”

Branch described their two styles as being quite different. “Lindsay’s style is more clean-cut and my style is more fluid,” she said. However, the two believe that this helps their partnership thrive. “It is challenging at times, but it forces you to think outside of the box.”

Those who attended their presentation received a pleasant surprise. Branch and Carron offered them the chance to design their own boards for the nonprofit of their choice. Attendees were divided into three groups, and Board Well pledged to create a board of the winning design for the organization the group had chosen.

“Down the line we hope to be able to donate up to 30 percent of our revenue to nonprofit organizations,” Carron said. The Pepperdine alumnae also hope to showcase their work not only at more art shows, but also at musical festivals and surfing competitions.

Though at the moment they are concentrating on surfboard design (with the occasional skateboard), they plan on expanding to snowboards and skimboards in the future. “We hope to branch out and design for all extreme sports eventually,” Carron said.

At the end of their presentation, Branch and Carron had advice to offer students on how to create their own nonprofit and the importance of having a vision. Though they reiterated that it is hard work, and funding is an important factor, it should never be the focus of the work. “Let your passion and love shine through, and the money will come.”