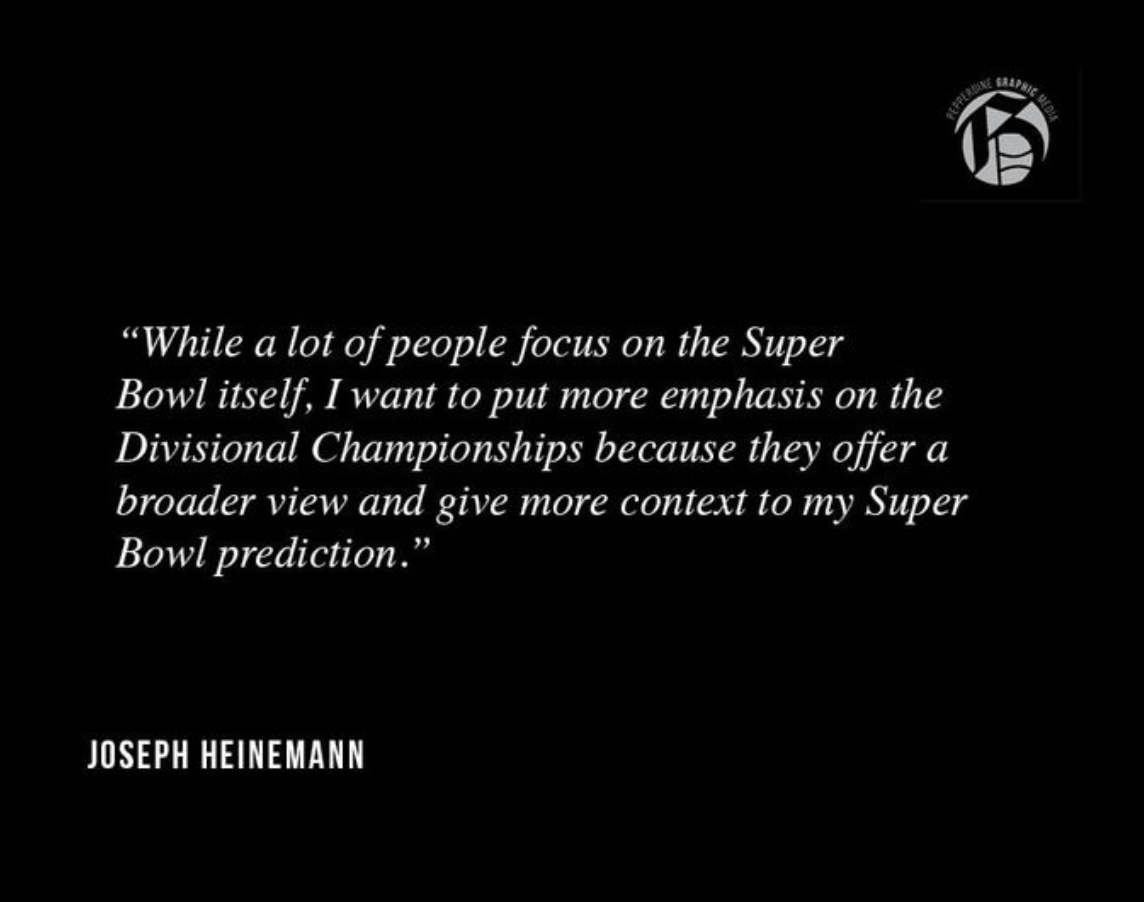 It’s that time of year again! From now until February, football fans will be graced with all the chaos of the NFL season. Upsets, blowouts, breakouts, injuries and more will mold all 32 teams into a gripping storyline that will take hold over the U.S.

The big question that looms over every football fan is who will win it all? Will it be one of the dominant teams from the preseason? Or maybe we’ll see an underdog rise to the top and prove everyone wrong. While a lot of people focus on the Super Bowl itself, I want to put more emphasis on the Divisional Championships because they offer a broader view and give more context to my Super Bowl prediction.

Over the past couple of years, the Buffalo Bills have managed to put together a team filled with young talent and hardy veterans. Buffalo’s starting quarterback, Josh Allen, is going into his fifth year firing on all cylinders. Last year, he threw for 4407 yards and 36 touchdowns, which helped the Bills lead the 2021 season in points. To top off the already explosive offense, the Bills added rookie James Cook to add more talent at running back. On the defensive side, the Bills have been stellar, finishing the 2021 season as the top defense in the league. All of these factors lead to a Bills team that is primed for the playoffs.

The Chiefs are hoping to climb their way back to glory this season as they try to repeat the success they had in their 2020 season. While the team has lost their star wide receiver, Tyreek Hill, they’ve worked hard to bring in talent to balance out the loss. Some of these crucial additions have been wide receiver Juju Smith-Schuster from the Pittsburgh Steelers and rookie wide receiver, Skyy Moore, out of Western Michigan. While the offense is high flying, the defense is a bit more rough, coming in 9th the previous season. Despite this, though, their 4th ranked passing offense will have a hay day against opponents this season.

The Bucs are going into a year filled to the brim with veteran talent. Their offense has a Hall of Fame receiver core with Mike Evans and Julio Jones, alongside potentially the greatest quarterback of all time, Tom Brady. Their rushing game has stayed solid with 6th year running back Leonard Fournette and with a brick wall offensive line, Fournette should have no issue putting up good numbers and giving the passing side of the offense a break. While there are valid concerns about age and injury with this team, if they manage to stay mostly healthy, the Bucs deserve no other place than the top.

The defensive side is strong having ranked 6th last year overall and 4th in least points against per game. If the defense can focus and continue to keep scores low against teams, the Bucs will be able to get past teams that heavily invest in offense, like the Los Angeles Rams or the Dallas Cowboys.

The 49ers are a bit of an underdog pick this year. While they’ve been able to stay successful putting up a record of 10-7 last season, the team is stuck in a very difficult conference that makes playoff chances lower despite the positive growth over the last year. They also will be starting the season with a brand new starting quarterback, Trey Lance, who spent most of the year as a backup to Jimmy Gorropolo. Even with taking all of these aspects into account, I’m still firm on my stance that the 49ers will be very successful this year. They have a decent defense, being ranked 5th in sacks and 14th overall compared to the other defenses across the league this last season.

To start things off, the Los Angeles Rams won the Super Bowl last season which in turn gives them a very difficult schedule of teams to play throughout the new season. Next, we have the two other teams in the division the Seattle Seahawks and the Arizona Cardinals. The Seahawks are going to have major problems in their offense after their long-time quarterback Russell Wilson left in free agency. Even if Seattle beats all the odds and they manage to stabilize themselves, I don’t see them getting more than seven wins. The Cardinals on the other hand have a major talent at quarterback with Kyler Murray, but they struggle with their star receiver DeAndre Hopkins being out with a suspension. All these aspects lead the 49ers to have almost perfect conditions, and if they capitalize on this, they have a smooth road to the playoffs.