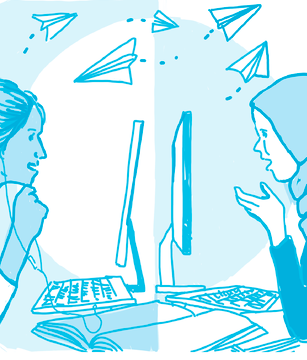 A group of Pepperdine students have found a way to connect with Syrian refugees through a nonprofit organization called Paper Airplanes.

President of No Lost Generation (NLG), a refugee advocacy organization, senior Molly Pasquarella brought Paper Airplanes to Pepperdine fall of 2017. Paper Airplanes was started in 2013 by former Carleton College student Bailey Ulbricht with the goal of teaching English to Syrian refugees via Skype. Pasquarella emphasized how Paper Airplanes breaks the “Pepperdine bubble” and offers students a view of the rest of the world.

“When it comes to the student I tutor, all he knows is war and destruction and his family fleeing the country,” Pasquarella said. “That is something so hard for college students, especially at Pepperdine, to appreciate. Because I choose to be exposed to these things, I understand what is going on, but it’s very easy to not even think about it.”

NGL is an initiative to spread awareness about the global refugee crisis, especially what happens to children when they become refugees.

“A lot of the time, their education stops for one to three years,” Pasquarella said. “Paper Airplanes is a great opportunity to work with those refugees, particularly from Syria.”

Ulbricht spent two months of the summer of 2013 volunteering in Turkey, according to the official Paper Airplanes’ website. There, she met several college-age Syrian students desperate to complete their university degrees and learn English.

When Ulbricht returned to the United States, she Skyped with students to help them with their English. More and more Syrian students wanted to learn English, so the tutoring spread to Ulbricht’s friend group. By Dec. 2016, her program received official nonprofit status.

The organization’s name strung from an experience Ulbricht had while volunteering in a classroom, Pasquarella said.

“[Ulbricht] made a paper airplane, and when she went to fly it across the room, all the kids ducked,” Pasquarella said. “They were afraid because when they see a plane they think ‘bomb.’ It truly struck her. She knew she wanted to help them so their reality is not ducking every time they see a plane.” 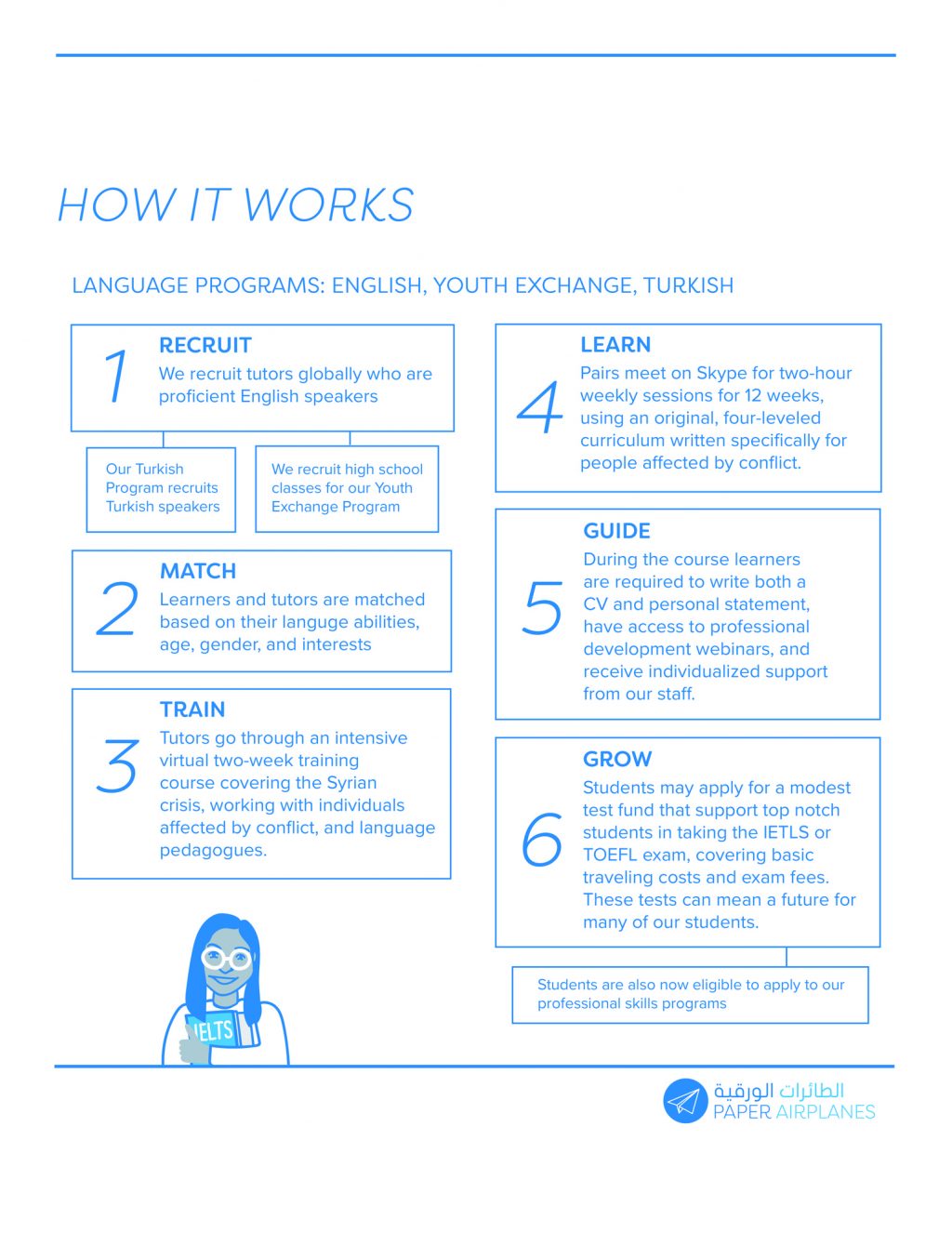 Since Paper Airplanes’ start on Pepperdine’s campus, 15 to 20 students have become tutors. Pasquarella explained all students participate in a thorough training seminar before tutoring, which informs tutors about current events and teaching English.

“They educate you on the crisis in Syria during the training,” Pasquarella said. “A lot of it is familiarizing you with what’s happening, so that you’re aware of the cultural aspects. It’s a pretty extensive training process, but it can be done in a weekend. It really makes you feel prepared to tutor.”

Paper Airplanes also provides a specified outline for each session, so tutors are not needed to form lesson plans.

“There is a set curriculum for each meeting, and the tutoring sessions last between an hour and an hour and a half,” Pasquarella said. “The curriculum is so specific that it tells you exactly how much time you should be spending on each part of the activity.”

It is not a requirement for a student to know Arabic when he or she signs up to tutor. For those who do not speak any Arabic, the organization matches them with an advanced-English refugee.

Senior Austin Norton did not speak Arabic going into the program. He tutors an older student who he described as very bright, being self-taught and fluent in both Turkish and English.

“He only spoke Arabic, but then taught himself English while in undergrad in order to read science literature,” Norton said. “Then, when he had to flee to Turkey, he had to teach himself Turkish. He got so good at Turkish that now he works as a translator between Turkish and Arabic.”

The two mostly work on refining grammar and spelling to help him obtain his PhD and for future job prospects, Norton said. The ambition Norton has seen in his student has brought to light a different view of refugees.

“We see refugees as portrayed in the media to be very dependent, not self-sufficient and kinda a drag on the country they immigrant to,” Norton said. “The student I’m working with is very motivated, and he’s going to do a lot of good work.”

Norton said he was simply a guide in his student’s self-driven education.

In most cases, students are tutoring college-aged students who have fled to from Syria to Jordan, Lebanon or Turkey as refugees. Pasquarella has a rare situation where she tutors a 19-year old student named Abdul who is still living in the capital of Syria, Damascus.

“Sometimes he will be in the middle of our Skype call and all of the lights in his house will go out,” Pasquarella said. “It’s because Damascus is a mess right now, and he is in imminent danger at all times. In that sense, it gives you a human perspective of what the war has done to Syria.”

Pasquarella said her experience with Paper Airplanes has broadened her knowledge on the Syrian civil war.

“The refugee crisis is not a political issue, it is a human issue,” Pasquarella said. “I’ve learned about the Syrian civil war in a very academic sense, but spending time with him once a week has really brought the human element. It has supplemented my academic experience.”

For more information on Paper Airplanes, visit their website. 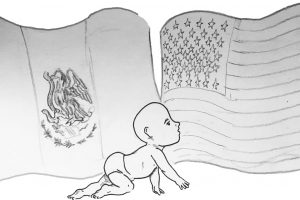 Art by Peau PorotesanoAs a member of the Latino Student Association’s Executive Board, I have many conversations on a daily...
Copyright 2013 Jupiter Premium Magazine Theme
Back to top