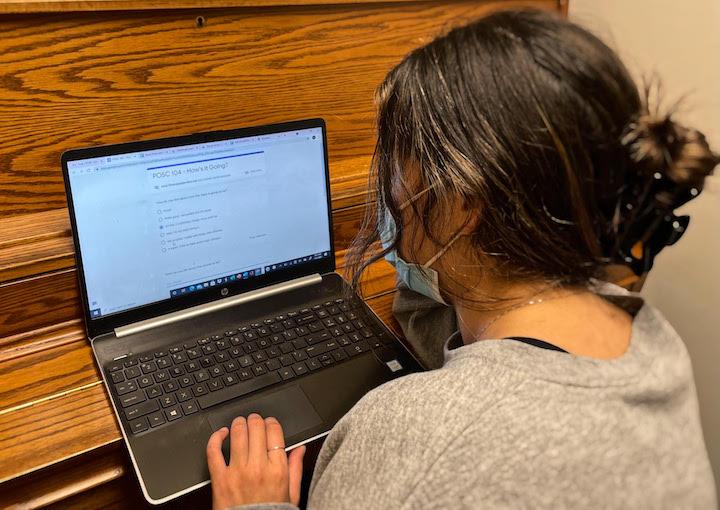 Sophomore Sarai Flores fills out a mid-semester course evaluation from one of her professors in October. Many Pepperdine instructors provide their own evaluations over the course of the semester to collect feedback from students.

Students are reportedly split on whether their input matters in course evaluations, leading some to give emotionally charged or irrelevant reviews. However, faculty said their input actually matters a lot.

Professors use the data to adjust their courses, and evaluations play an important factor in considering faculty for tenure review or promotions, Seaver Dean Michael Feltner wrote in an October email.

According to an October poll of 55 Pepperdine students, Waves are largely unaware of the form’s significance. Only 67% of students polled plan on completing their evaluations. Roughly 80% of participants either question or don’t believe their professors will listen to and make adjustments based on their responses. Roughly 30% are unsure if Pepperdine values their feedback.

“This school is too big for them [professors] to account for everybody,” said junior Luke Sorensen. “I don’t think they can make the changes that people ask for.”

Both students and professors question the value and fairness of course evaluations.

What Students Have to Say

The survey asked students to rank how seriously they take course evaluations on a scale of one to five, one being “not seriously” and five being “very seriously.” Roughly 62% of students surveyed said they seriously respond to evaluations, but more than 23% indicated otherwise.

“I feel like Pepperdine probably does consider students’ input, but I don’t know if professors take it too seriously,” Doggett said.

Although he usually leaves positive feedback, Doggett said student experiences should be a factor in faculty reviews.

“I feel like if professors are getting multiple comments on the same things, they [the Rank, Tenure and Promotion Committee] should probably take it into accord,” Doggett said.

Sophomore Sarai Flores said she often speeds through her responses because the process is time consuming. Because her friends and classmates also brush off course evaluations, Flores said such assessments shouldn’t be considered regarding tenure or promotions.

“You’re going to get really passionate students who don’t like you because they’re not doing well in the class and don’t understand the concept,” Flores said. “I don’t think that necessarily always reflects on how good the professor is.”

Sorensen said he believes course reviews should be taken into consideration for tenure and faculty promotion decisions.

“Pepperdine should hire professors who their students like,” Sorensen said.

Sorensen takes his course evaluations a “zero out of 10” in seriousness, he said.

Evaluations Are Just One Piece in Faculty Review

The divisional dean, department faculty and the Rank, Tenure and Promotion Committee examine professors’ teaching abilities, their scholarly achievements and research, their service to the University and community and their ability to uphold Pepperdine’s mission, Feltner wrote.

“From my experience, student evaluations are one of many factors considered when evaluating a faculty member’s teaching effectiveness,” Feltner wrote.

To supplement student evaluations, professors are also subject to peer reviews, where experts in the division review their course materials, exams and syllabi.

“There are different ways to evaluate teaching,” said Maire Mullins, Blanche E. Seaver chair of English literature. “There’s the teaching course evaluation, but there’s also the observation of the class. Colleagues observe my classes if I’m up for tenure or promotion, and I would go observe other colleagues’ classes.”

Students previously expressed disapproval of decisions made during tenure review, as the Graphic reported when former Provost Rick Marrs denied then-Sociology Professor Alexander Diener tenure in 2010. In this case, students believed their reviews and feedback should’ve weighed heavier in the decision-making process.

Professors and academic research point to many problems with course evaluations.

The incentive for faculty to boost their course evaluations can present ethical challenges. In 2005, the Graphic reported Pepperdine fired Political Science Professor Ronald Fagan after skirting University sanctions placed on him for forging student feedback used in his tenure review.

When universities weigh student reviews heavily in tenure, they put pressure on professors to cater to the desires of students, according to a 2010 study. Increased emphasis on course evaluations can inadvertently lead to relaxed grading standards and diminished student and teacher effort.

Course evaluations are often skewed toward measuring emotional experiences rather than providing an accurate measurement of the quality of the material or effectiveness of the professor’s teaching method, Amy E. Dayton, a professor of English at the University of Alabama, wrote in a 2015 study.

Rather than handing out evaluations without comment, Dayton wrote professors should discuss the importance of student feedback in shaping coursework and overall classroom experience.

At Pepperdine, Kendra Killpatrick, senior associate dean and a tenured professor of Mathematics, said she gets feedback from her class periodically during the semester through evaluations tailored to the format of her course.

In each evaluation, she asks students to estimate the number of hours they spend per week on homework, Killpatrick said.

“If I’m seeing those numbers out of a reasonable range for a lot of students, then I’m making adjustments, in real time and for the next semester,” Killpatrick said.

Mullins said she reviews her evaluations carefully when preparing for the next semester and is open to making adjustments.

Although she doesn’t take her evaluations seriously, Flores said she gives positive feedback to instructors who hand out evaluations during the semester because “those are the professors who typically care.”

Whether they realize it, students evaluate their instructors based on their appearance and along racial and gendered lines, Lincoln University professors found in a 2017 study. Minority professors have a disadvantage in course evaluations based on gender, and ethnicity.

The Lincoln University professors argue the growing importance of evaluations might contribute to discrimination in the tenure review process, leading to the whitewashing of faculty.

Chris Doran, president of the Seaver Faculty Senate and a Religion professor, said professors have reported cases of racial and gender bias appearing on their evaluations.

“That part of it is also a really important consequence,” Doran said. “Or a possible consequence to how we do our evaluations now — and so trying to understand that better is something I would like to do.”

This measure is part of a three-year transition process to upgrade student evaluations and requires professors to set aside time in class for completion, Doran said. The proposal aims to produce more accurate and helpful responses by removing possible incentives for better reviews.

“The feeling was, from many faculty, that those who give extra credit were possibly incentivizing not just greater participation but were incentivizing comments or remarks that might not be actually representative of what was going on in a given semester,” Doran said.

The unintended consequences of course evaluations, including emotional feedback or grade inflation, are often left out of the discussion because of the challenge in correcting them, Dayton wrote.

Course evaluations produce questionable results when students grade their professors’ performance emotionally, assessing difficult coursework or a heavy workload to be a personal attack or a reflection of poor teaching.

“The real lesson is that students are not generally well-versed in pedagogy,” wrote Chris Beyers, a professor of English at Auburn University, in a 2008 study. “So their evaluations often have more to do with their emotional experiences than learning.”

Mullins said she puts a lot of merit on outlier comments and emotional feedback from her evaluations.

“They can be suggestive and helpful for me as a teacher, so in those instances, I’m not necessarily looking for complete consonants or responses to the teaching,” she said. “There could be something else going on in the students’ lives I don’t know about.”

The “middle of those two extremes” offers the most helpful feedback, which Doran said he refers to when deciding which textbooks, assignments and test material to use the next semester.