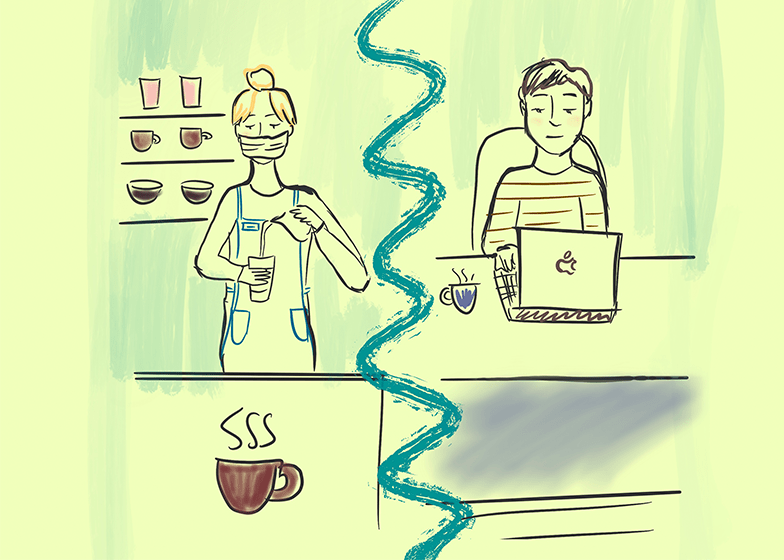 Pepperdine students at home and in Malibu have found work in many forms. Some returned to their jobs in person this school year, while others transitioned to remote work or found entirely new jobs due the pandemic.

“I kind of decided, ‘OK, I’m going to try and look for a job in my local area,’ truly because I needed a reason to not be in my house anymore with my five younger siblings,” Cunningham said.

A heart condition known as a moderate persistent mitral valve prolapse makes Cunningham immunocompromised. She said many people in Boulder City did not believe in the virus at the start of the pandemic, which made her hesitant to find a job.

“When I first came back home, it was honestly scary how people were treating the pandemic,” Cunningham said. “Our grocery store was one of the first places to require the mask mandate, and there would be people, I mean truly just rioting in the streets, which was absolutely just privileged and ridiculous. There were people who would bring crocheted masks that have little holes in it, just as an excuse to get into the grocery store.”

Boulder City experienced a spike in COVID-19 cases in August, which Cunningham said led people to take the pandemic more seriously. By the time she started working at Boulder City Company Store, the situation had improved enough that she felt safe doing so.

“I think people were starting to become more well-versed and businesses were fully enforcing masks and those sort of mandates in my town,” Cunningham said. “That made it easier to consider working.”

Cunningham considered working as a medical scribe or something else related to her Biology major but decided against it because of her immune system.

Despite her health condition and job in food service, Cunningham is not eligible to get vaccinated in Nevada.

Many student workers have the ability to get vaccinated because of their jobs. LA County starting allowing university employees to be vaccinated earlier this month, so even students working remotely for Pepperdine can get their shots. Students working in other eligible industries, like food service in Los Angeles, are also eligible.

“Because I’m technically a food worker, I’m now eligible to get the COVID vaccine, so I got my first dose [March 8],” first-year Cadey Comey said. “It’s nice because without my job, we’d probably be the last group to go.”

Because of unreliable WiFi at her home in Nashville, Tenn., Comey lives on campus. She started working as a barista at a Starbucks in Malibu in January and only works weekends to accommodate her class schedule.

Comey picked up a job this semester to have extra money to save, not spend.

Besides Starbucks, Comey considered working a remote university job, like Jumpstart — an early education program Pepperdine students can participate in through the Volunteer Center.

Junior Michelle Wong works for Jumpstart. She worked there her first year at Pepperdine when it was in person, but this year Jumpstart is completely virtual.

Jumpstart works with underprivileged preschool children in the LA area, who currently have all have their classes online, Wong said.

“Even I as a college student struggle a lot with online school,” Wong said. “I don’t love being at home all the time, so I couldn’t imagine how hard that is for these kids that are four, five years old, maybe even younger.”

In-person Jumpstart sessions were twice a week for two hours each, while online sessions are only 30 minutes. Wong said she misses out on a lot of interaction with the children but still thinks Jumpstart benefits them.

“I think maybe the impact that we have [is] that they have a new face to see and people to play with them and interact with them,” Wong said. “It’s not just their family or their teacher that they see all the time.”

Spending less time with the kids also means Jumpstart is less of a time commitment for the student workers. Wong said she likely will not work for Jumpstart next year, assuming it is in-person.

“The difference in time commitment is significant,” Wong said. “I do enjoy working with the kids, but looking at my schedule for senior year, I don’t think I have the capability to accommodate that kind of time commitment.”

Wong said she works for Jumpstart to fulfill her work-study, as she did her first year. She went abroad to Heidelberg, Germany, for a semester her sophomore year, which meant she had to find other work-study jobs since Jumpstart is a full-year commitment.

Pepperdine technically employs Wong through Jumpstart, meaning she is a University employee eligible for the COVID-19 vaccine in LA County. A March 3 Public Relations Office email to the Pepperdine community alerted Wong to her eligibility.

Wong lives at home in San Diego, but the vaccination site she went to accepted a letter confirming her employment at Pepperdine.

“The day that they sent that [email] out, that weekend I got my first shot,” Wong said. “I feel like in the end, everyone’s going to have to get vaccinated, so I might as well just do it.”