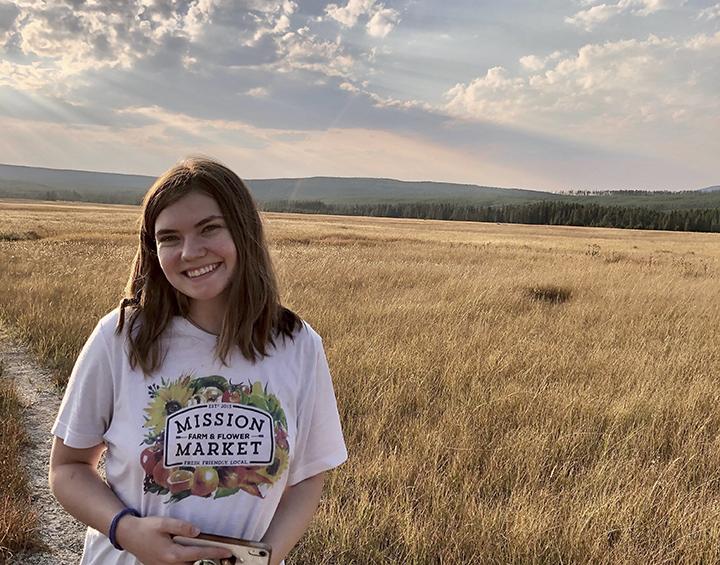 Junior Claire Evans explores Yellowstone National Park during a road trip she took during her semester off in the fall. Many students decided to take a semester off due to COVID-19 and pursued other opportunities while they awaited a return to in-person learning. Photo courtesy of Claire Evans

The question is on many students’ minds: are classes on Zoom worth it? While most students have thought about this, a handful of Pepperdine students acted on this question and took a semester off.

As a whole, Pepperdine’s enrollment numbers for the fall semester decreased from previous years. According to the Fall Enrollment Census, 3,132 students enrolled full-time at Seaver College for the fall semester, in comparison to 3,320 in fall 2019. Students said they wanted to take time off to explore their passions, pursue other opportunities related to their career choices, and simply have a break from Zoom.

“I felt like it would be more beneficial for me to take the year off and work on other things,” said Jadyn Gaertner, junior Screen Arts and Creative Writing major. “I will come back later to do actual hands-on work.”

Gaertner decided to take the academic 2020-2021 year off and uses her time to explore her passions, work and get a glimpse of what life could be like after college. In the fall, she worked as a nanny and a tutor, but now she is working as a production assistant for the TV show, “Ozark.”

Gaertner said the main reason she took the year off was that she didn’t want to miss the firsthand learning experience that comes with being on campus. By taking the year off, she is able to get that experience by working as a production assistant and being involved in the film industry.

“Specifically as a film major, I feel like having hands-on experience is really what helps me grow,” Gaertner said. “One of the things that draws me to the film program is the collaboration aspect of it all, and I thought I wasn’t going to be able to have that.”

While she has enjoyed her year off so far, Gaertner said she is excited to come back to school where she can learn in a classroom in the next academic year.

“As long as we are going to school in-person [I’ll return to Pepperdine],” Gaertner said. “I’m learning [right now] but not in a school environment; I feel like I have so much more to learn.”

Claire Evans, junior Screen Arts major, also took the fall semester off and spent her time working as a waitress and taking a road trip across the country. Additionally, she said she focused on self-care and gave herself time to rest after doing three months of summer classes.

“I took time for myself and was able to do things that I’ve always said I wanted more time to be able to do,” Evans said. “I didn’t have a set plan, I just wanted to take things at a slower pace for once.”

Evans said she always planned to go back to school for the spring semester, despite concerns over learning fully on Zoom. During her time off, Evans said she felt disconnected from her major after going abroad and not doing major-specific courses since her first year.

“I felt so at a loss for direction so I was really happy that I had the plan to go back in the spring,” Evans said.

In addition, Evans said she missed her friends and the social experience they were having, even if it was through a screen, as well as learning in a school environment.

“At first I thought I was so happy I wasn’t doing Zoom classes,” Evans said. “But people started talking about seeing their friends on Zoom and I realized I missed learning.”

Evans said she valued her time off and learned to play the piano, practiced art, spent more time with her family and her dog and completed several crafts with materials from around her house. She said she thought it was a valuable experience but wouldn’t have done it if it wasn’t for COVID-19.

“I think in-person classes are too valuable to take a break from, but during COVID I would recommend it,” Evans said. “Zoom fatigue is real.”

The administration at Pepperdine said they anticipated some students taking the semester off and planned for it accordingly in the budget. President Jim Gash spoke about enrollment numbers in Pepperdine’s President’s Briefing on Feb. 3 via Zoom.

For the fall, Pepperdine reported a $40 million decrease in funds due to losses in room and board revenue, and COVID-19 related expenses. The University was able to make up for this loss but is expecting similar numbers for the spring semester, Chief Financial Officer Greg Ramirez said.

“With extreme optimization measures taken by this community and with support through the CARES Act we’ve managed to address and overcome the shortfall for the fall term,” Ramirez said.

The problem of reduced enrollment isn’t unique to Pepperdine. Nationwide, 16 million Americans canceled plans to go to college, according to a census survey conducted by the U.S. Census Bureau.

Some students cannot attend school, even in the online format, during COVID-19 because they live internationally and have government regulations, or because they have to work to provide for their families. In addition, many students just said online learning wasn’t for them, said Andrea Harris, supervisor of OneStop.

“We want to have as many students as possible, but on the other hand if they don’t want to be here we aren’t going to try to convince them to stay,” Harris said.

The faculty at Pepperdine continue to communicate with students who have taken the semester off, and the faculty are doing their best to create connections with students in the online format, Harris said.

“The core of Pepperdine is the community,” Harris said. “It’s hard to foster connection over zoom, but it’s not impossible.”

OneStop continues to be a source for students to get help from if they are considering taking a semester off, or if they have questions about enrollment options at alternative colleges, Harris said.

“We are happy to help and there is no pressure; we aren’t here to force you to stay,” Harris said. “We want to work with everybody and we can’t wait to be back together as a community.”