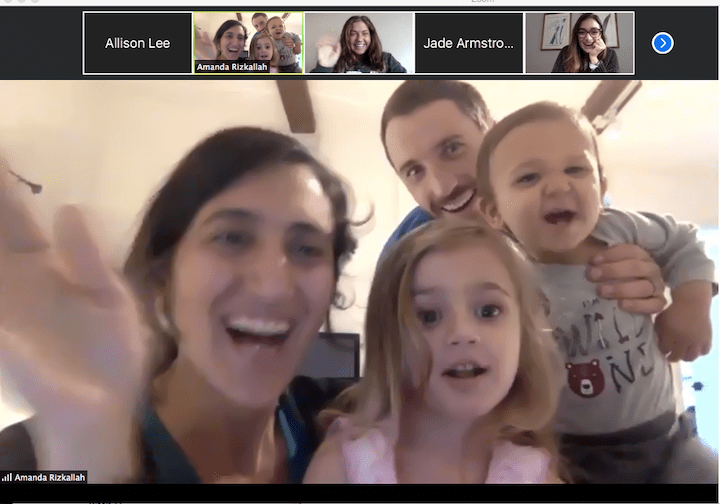 International Studies Professor Amanda Rizkallah waves to her zoom class with her husband, daughter (3) and son (1).

With the university’s recent shift to online classes, some students and professors voice concerns about how learning and instruction are being affected by the change.

Eric Johnson-Greer, a fifth-year senior, said that among the challenges he has experienced — like missing the human interaction in classroom settings and interactive ways of learning such as group activities — the biggest challenge is the lack of focus he experiences at home.

“It can be very distracting,” Greer said. “Some people are able to focus more at their home environment — I’m not one of those people. That’s why I never chose to live off campus because I know if I went back to wherever I was, I wouldn’t be able to [focus].”

Many classes still meet during their normally scheduled times via Zoom, an online interface that allows professors to conduct class with students through a video conference call. Zoom calls offer several features such as breakout rooms, screen sharing, in-call chats and the ability to record meetings so that students in different time zones can watch later.

In addition to zoom, some professors meet via Google hangouts or offer module-style classes that include recorded lectures, allowing students to pace their own learning.

English professor Lisa Smith said she, like other professors, has adopted a mixture of both synchronous classes through Zoom as well as recorded lectures.

One positive effect Smith said she has witnessed is greater attendance overall in both her upper and lower-level courses — as high as 95% attendance — since the move to online.

“I’m assuming that students are wanting the human connection, wanting the interaction or they really are just so bored now that all these states are doing shelter in place,” Smith said. “But that has been really encouraging to me because I was a little afraid that it was just going to be me and a handful of people.”

Smith said although the technology is great, she has experienced some drawbacks to online instruction in general.

“Even in my fairly talkative classes, discussion is definitely harder,” Smith said. “It’s just easier for everyone to go into listening mode and for me to go into lecturing mode.”

Smith said she is trying to remain sensitive to students’ needs and remodel her classes to fit the online structure.

“I feel like I need to be aware of how much coping energy is being taken up from students in other areas,” Smith said. “[Like] missing friends, ending senior year, keeping up and doing everything virtually, taking care of a little sister or brother or elderly parent.”

While professors and students continue to make the best of the adjustment over the coming weeks, university officials were prepared for the move to online since spring break.

Dean of Seaver College Michael Feltner said the university equipped professors with training sessions to provide them the tools and knowledge they need to operate Zoom. Many professors have already experienced moving their classes online in November 2018, when instruction went remote for two weeks following the Woolsey Fire.

Kendra Killpatrick, associate dean of Seaver College, said university IT created a university-wide Academic Continuity Plan in the aftermath of Woolsey that has been used to make the transition as smooth as possible. The Center for Teaching Excellence provides professors with any additional support they may require.

Feltner, who is also a professor of Sports Medicine, said students in his classes span six hours of time zones, and so he is compassionate toward those who cannot attend class synchronously.

While Greer and other students feel the adjustment has been less than ideal, Greer said most of his professors have been understanding of his and his fellow classmates’ needs during this time.

“It’s also a very unprecedented time — people our age have never seen something like this, which shocks the world,” Greer said. “Yes, we still have school, but there is a global crisis right now that is affecting all of us.”