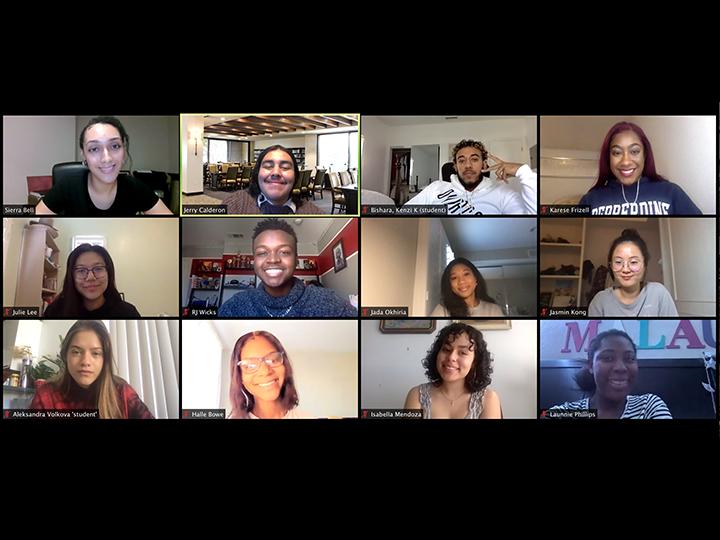 Student Government Association’s Council holds its first meeting of the spring semester through Zoom on Feb. 17. The Diversity, Equity and Inclusion directors led the meeting, which brought both the old and new members together for the first time. Photo courtesy of Sierra Bell

Pepperdine Student Government Association’s Diversity, Equity and Inclusion Council is expanding its team to include more student voices this spring.

Junior and SGA President Chase Johnson said SGA created the council in fall 2020 and is opening up the council to more students this spring. As of February 12, the council has 21 members; and students are able to join without having to run or be appointed.

“The ultimate goal is for any student on campus to be able to come to a Pepperdine classroom and exist as somebody who is authentically themselves — somebody who’s not making the accommodations or stripping themselves of their cultural background, their heritage to fit a certain norm,” said Sierra Bell, senior and Co-director of the DEI Council.

Junior and Co-director of the DEI Council Kenzi Bishara said his and Bell’s roles exist to highlight issues of racial contention to faculty and shape the community to be more representative, validating and affirming.

“It’s hard being a Black student here because I feel like you’re almost left out here to dry and almost makes it feel like, you’re playing the victim or you’re just amplifying issues beyond what they are,” Bishara said. “And it leads to this dynamic where we feel as if our needs, our concerns, our emotions aren’t being validated which creates a lot of hurt.”

On its website, the University has a statement about Pepperdine’s commitment to diversity; the University also provides students with opportunities to promote diversity and representation through clubs and organizations.

While Pepperdine shows its support for diversity through such initiatives, students continue to express dissatisfaction with the slow progress as well as the need for more urgency and emphasis.

“I have had a very difficult experience here as a Black student at Pepperdine and I’ll be totally upfront and candid about that,” Bishara said. “That’s the reality here, and I know that’s the reality for a lot of students.”

The DEI Council facilitated two listening sessions in the fall of 2020 for Seaver students to directly speak with President Jim Gash through Zoom.

“It was nice to have [the administration] there to kinda hear from us directly rather than through like other sources and just to actually hear our voices; that was really nice,” Bishara said. “Now it’s just a matter of what will be implemented in response to what was expressed.”

Last semester, the Armenian Student Association and the DEI council worked together to legislate an SGA resolution that advocated for recognition of the conflict facing the Armenian community and support from the Pepperdine community, Johnson said.

SGA passed a similar resolution with ASA in March 2017, but Bell said action wasn’t enforced after the previous resolution. Due to the deeply personal and political events that the Pepperdine Armenian community faced in the fall, the DEI Council picked up where things were dropped in previous years. The council collaborated with ASA, emphasizing they cannot make a resolution in the best interest of a group they are not a part of.

“We draft legislation that changes how things happen at Pepperdine and that’s why it’s so important for us to connect with the people around us because we can’t serve anyone without knowing what they need,” Bell said. “These are big steps and there’s opportunity here for actual change to be made. It just requires a substantial amount of togetherness for it to be taken seriously.”

By working behind the scenes, Bell said she sees the people who care about these issues and are working to find solutions.

“I also do really believe that we are a part of a school that’s governed by really well-intentioned people,” Bell said.

According to Bell, the council meets every other week. If students are interested in joining, they can fill out an online form on SGA’s Linktree.