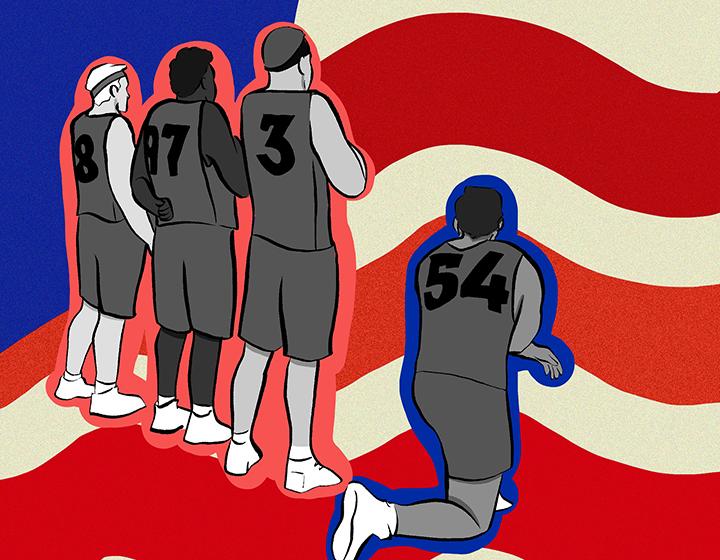 Protests advocating for justice for crimes such as police brutality, institutional racism, education reform and voter education have continued since the death of George Floyd.

Collegiate athletes have been leaders working for diversity, inclusion and equality among their conferences and campuses, including student-athletes from Pepperdine.

Pepperdine Athletics has worked closely with student-athletes from the Waves Leadership Council this summer to put together a variety of education panels with different speakers to discuss race, diversity and inclusion.

One of the student-athletes at Pepperdine who has been at the forefront of these efforts is Jayda Ruffus-Milner on the women’s basketball team.

“We had a panel called Listening to Each Other: A Conversation about Race and Anti-Racism at the end of June with different staff and alumni of Pepperdine, and we were all just talking about our experiences and how this time has affected us,” Ruffus-Milner said. “We had close to 115 students attend.”

Ruffus-Milner said he hopes Pepperdine Athletics can be a building block in Pepperdine’s community efforts to help raise awareness for racial and social justice.

“We want President Gash and the administration to acknowledge the problems that we see,” Ruffus-Milner said.

Karina Herold, deputy director of Athletics, has been vocal about initiatives that push for racial and social justice.

“Three or four years ago, we formed a diversity council and put together our own diversity statement,” Herold said. “This is something we have felt strongly about.”

Herold also said it is critical to have conversations about hard topics like race.

“The skills that we really wanted to bring to our Waves Leadership Council were to teach them how to facilitate conversations with peers,” Herold said.

The West Coast Conference, which includes the Waves, has created initiatives to become a more inclusive and diverse environment.

The WCC created the “Russell Rule,” which is the first conference-wide diversity initiative. It is named after former WCC and NBA superstar Bill Russell.

The rule requires each institution to include a member of a traditionally underrepresented community in the pool of final candidates for every athletic director, senior administrator, head coach and full-time assistant coach position in the athletic department, according to an article from the West Coast Conference.

“After the murder of George Floyd, our presidents wanted to enact meaningful and lasting change in the WCC, and we’ve been amazed at the nation-wide positive response we’ve received since announcing the Russell Rule,” WCC Commissioner Gloria Nevarez wrote in an email. “We hope this is a signal to the marketplace that the WCC is committed to change.”

Athletes have been engaging in acts of solidarity before and after games, including taking a knee for the national anthem and wearing Black Lives Matter shirts and patches.

“I really want for us to have shirts made or something Black Lives Matter related that shows our support,” Ruffus-Milner said. “I am supportive of people kneeling.”

Pepperdine Athletics pledged its support for students to use their free speech and exercise their First Amendment rights.

“We want to talk about it and help spark the conversation and not just be a support system — but also to be active in the solution,” Herold said.

On a broader scale, other NCAA conferences and student-athletes are making their voices heard in the fight for racial and social justice.

The Pac-12 Conference recently formed an advisory group for social justice and anti-racism with representatives from all 12 universities. It launched a series of anti-racism virtual forums for student-athletes and coaches.

The forum includes: Condoleezza Rice, a Stanford professor and former secretary of state; Steve Kerr, head coach of the Golden State Warriors and former Arizona Wildcat student-athlete; and Chiney Ogwumike, former Stanford athlete and WNBA star, according to an article from KSL.

On the East Coast, the Big East started the Coaches for Action organization, composed of minority assistant coaches with at least one member from its 11 institutions, and shared a mission to educate and bring awareness to social injustices.

Dwayne Killings, an assistant basketball coach at Marquette, was essential to the creation of this committee.

“We felt like we had such a unique platform as assistant coaches to engage our guys, speak out for our players and give our guys a platform,” Killings said.

Some of their goals are to create a scholarship fund to assist first-generation minority students with at least a 3.0 GPA who elect to attend a Big East school and to educate players and coaches about voting in local and national elections, according to an article from CBS Sports.

The Big East conference has been fully supportive of Killings and his colleagues’ creation of the committee.

“I think people have applauded our efforts,” Killings said. “When all of us got together, we did not realize we were doing real leadership training, and you have a Zoom call with your commissioner and assistant commissioner who have been completely supportive — it’s been awesome.”

Other meaningful changes have happened in part thanks to the actions of student-athletes.

Mississippi State University running back Kylin Hill tweeted June 22, “Either change the flag or I won’t be representing this state anymore.” It seemed to be the final push for lawmakers in Mississippi to act, according to an article from Insider Higher Education.

At the University of South Carolina, football players accompanied by Head Coach Will Muschamp and his wife, Carol, marched in protest through downtown Columbia. One player held a sign reading, “Matter is the minimum. Black lives are worthy. Black lives are beloved. Black lives are needed,” according to an article from the Big Spur.

Eddie Comeaux, a contributor to Forbes, wrote “Five Ways to Advance Racial Justice in College Sports.” He wrote it is important to understand and acknowledge anti-Blackness, rather than disregard its effects on policy decisions and practices in athletics, and to prepare Black athletes for quality school-to-career transitions.

He also wrote he wants to enable college athletes to monetize the use of their names, images and likenesses as well as to increase Black representation in coaching and senior-level leadership positions, ensuring Black athletes have a voice in NCAA governing board decisions, according to an article from Forbes.

Athletes from all professional leagues have continued to use games as a way to protest and show solidarity.

Today, all NBA playoff games have been postponed after the Milwaukee Bucks staged a boycott by staying in the locker room during tip-off in response to the Jacob Blake shooting in Wisconsin, according to an article from the Minnesota Star Tribune. Major League Baseball, Major League Soccer and the Women’s National Basketball Association followed suit, postponing several games amid boycotts and protests.