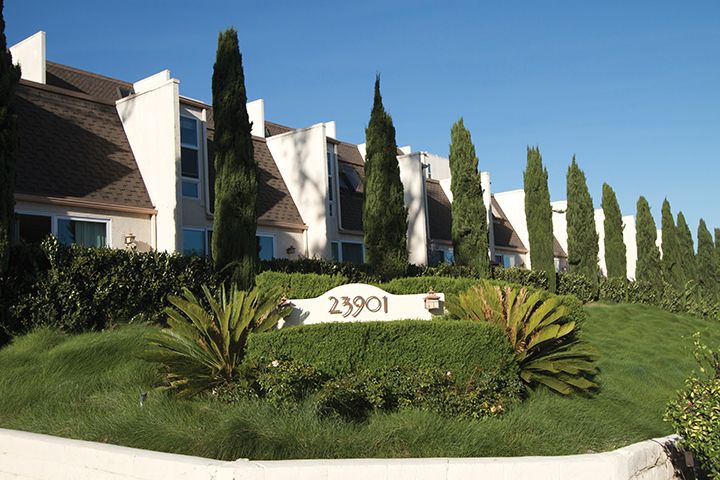 A select number of Pepperdine students living in the Malibu Canyon Village Apartments — commonly known as “the Stinkies” — received an information packet on Aug. 25. The packet contained two letters: one from Dean of Student Affairs Mark Davis and another from Ross Morgan Management, the Homeowners’ Association management company.

Davis’ letter — dated Aug. 25, 2014 — explained that he had attended a meeting with representatives from the MCV Homeowners’ Association and that because “the actions of a few are giving everyone a bad name,” Pepperdine’s Department of Public Safety would follow up on any neighbor complaints involving students. Davis actually first sent that letter on June 29 of 2006, not 2014.

“This is all a surprise to me because I haven’t met with the Homeowners’ Association of Malibu Canyon Village since probably 2006,” Davis said.

Davis also sent a letter Sept. 12, 2006. The content of these previous letters is almost identical, with a few exceptions to the Aug. 25, 2014 letter that was supposedly sent by Davis. 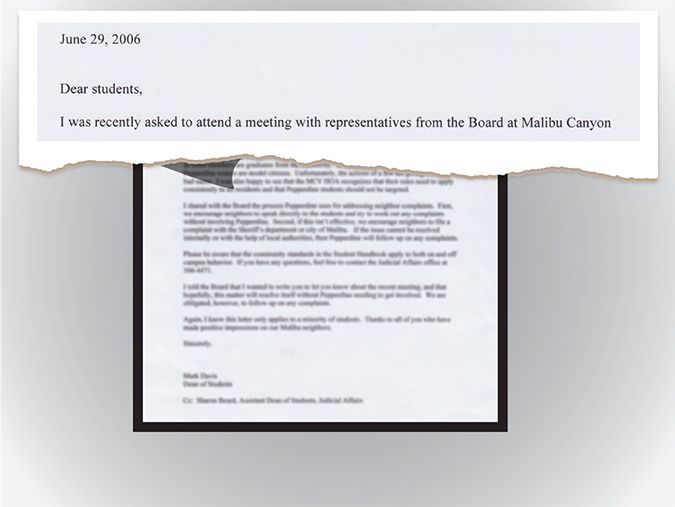 The content in all three letters is practically identical; the date, however, is different. The 2014 letter also has an additional sentence that had not been included in the previous letters: “This is the first time I have ever been asked to meet with a homeowner’s board because of ongoing complaints about Pepperdine students.”

Davis said he sent the letter only twice — once in the summer of 2006 and later that year in the fall of 2006. “This is the first time I’ve heard of another letter,” Davis said.

Ross Morgan Management Community Manager Sherry Hernandez said they may have sent it out again.

Hernandez pointed out that she sent out the 2014 letter but that she received it directly from the MCV HOA. When asked who was responsible for having changed the letter, she said: “Somebody from the board; I don’t know who it was.”

MCV’s Homeowners’ Association could not be reached for comments.

MCV resident junior Edwin Duran said he was confused by the letter. “It was weird for us, being that most us had just moved here a week ago,” he said. “It’s kind of weird that there are so many complaints. I don’t even think it’s humanly possible to get so many complaints in one week.”

Davis said he sent the first letter back in 2006 because students were “throwing big parties” and that the sheriff’s deputies received several noise complaints from MCV residents. That same year, Davis met with several local HOA locations where Pepperdine students tend to congregate, such as Villa Malibu. 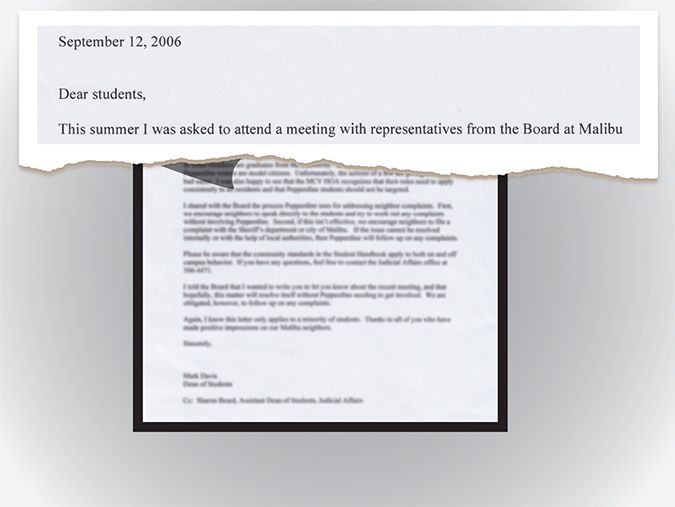 Sept. 12, 2006 // Davis sent the second letter almost three months after the first one. It starts with: “This summer I was asked…”

Davis said he asked other Pepperdine departments, who occasionally send out letters to local HOAs, about the possibility of the 2006 letters having been resent.

Davis specified that even though he agrees with the content of the letter, which is asking Pepperdine students to be model citizens, he is actually surprised with it still being sent out.

“They’re adults,” Davis said. “Pepperdine isn’t here to babysit them, to take action of things that are part of your HOA code.”

The packet also contained a notice on how to report disruptive disturbance procedures, a disruptive violation documentation form and a security notice. The security notice,  also dated Aug. 25, 2014, pointed out that in the past week, the MCV community had experienced a “more than normal” amount of loud, disruptive and inconsiderate behavior from some of the people who live there.

The notice also stated that some of the disturbances were being caused by groups of students from Pepperdine.

It also went on to explain, “Neighbors will document incidents of drunken behavior, including descriptions, names and vehicle identification of those present at these loud parties and that this information will be forwarded to the Department of Public Safety at Pepperdine University.”

Duran said he disagrees with the letter more than he agrees with it because it places responsibility on students who think they can “go crazy” off campus. He also thinks the letter could come across as being overly cautious.

“We don’t need to have someone behind us ready to give us consequences,” he said. “It shouldn’t be taken that far. Residents that do live here, who have lived here for years, should be a little more tolerant of what happens. I think they’re overstepping their boundaries.”

Hernandez said most of the letters that are sent out are caused by acts committed by Pepperdine students and that most of them are regarding noise complaints, parking complaints, having “parties into the wild hours of the night” and even jumping off the walls and into the pool. 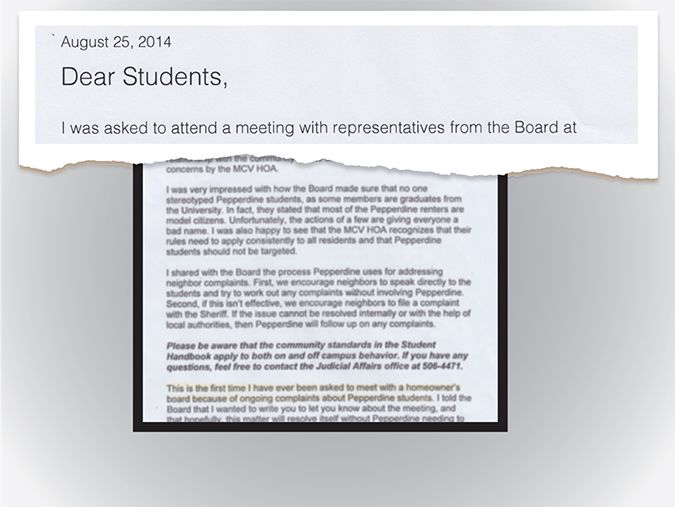 August 25, 2014 // The most recent letter received by Pepperdine students living at MCV. The first words: “I was asked to attend…”

When letters are sent out to members of MCV, they are usually sent to everyone, according to Hernandez. She also said Pepperdine students occupy more than half of the available 104 spaces in MCV.

“DPS doesn’t police off campus,” Davis said. “If a situation presented itself where there were complaints from residents of different communities in which Pepperdine students live, DPS’ first course of action is to talk to the students.”

“It’s because we’re so close,” Burke said. “Just because we live close to campus, you’re just targeting us. At [other] residences off campus they do get noise complaints; they don’t get DPS [to] show up at the door just because.”

According to Davis, DPS’ function is to report back to the Office of Student Affairs. If there were enough evidence to denote a violation of the Student Code of Conduct then students would be summoned to talk to Davis and Associate Dean of Students Shannon Beard about the events that unfolded.

“We’re under the same restrictions as we’d be on campus. DPS can be involved with us now; they can show up and do everything they could do on campus,” Burke said.

Sophomore and MCV resident Alexandra Sagona said she agrees with the letters’ policies. Even though she acknowledged that some of the complaints are overly harsh at times, she supports them.

“As Pepperdine students we should live up to the standard to which we’re supposed to be held. If DPS is surveying the area, I think it’s great,” Sagona said.

The Code of Conduct, a section within the Student Handbook, states, “Although the university is not responsible or liable for student off-campus events or behavior, it does reserve the right to take disciplinary action in response to behavior off campus that violates university expectations and policies or adversely affects the university community and/or the pursuit of its objectives.”

DPS Deputy Director Dawn Emrich said that even though the 2014 letter wasn’t generated by Pepperdine, she agrees with the content of it. “The information in the letter in terms of procedure is accurate,” she said. “The number of incidents that come to our attention is low. Students are generally living in the community and not creating disruptions.”

Davis said there is no limitation in the handbook as to how far DPS could get involved regarding behavior complaints or other Code of Conduct violations. “If one of our students is traveling overseas or is back at home and over Christmas break he turns out to be an axe murderer, we’re not going to have him come back to Pepperdine.”

Davis said DPS doesn’t go looking for trouble, doesn’t patrol off campus and that the only time in which his office is involved is when they are presented with clear evidence of  a Code of Conduct violation.

Sagona also said MCV residents see Pepperdine students as annoying children “in the sense that we’re annoying but we’re not doing anything wrong,” she said. “Non-students see us as a bit of a troublesome group, as part of a fleeting type era, that we shouldn’t even be in Malibu because we’re only here for college.” 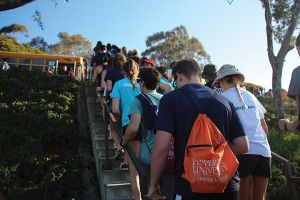