Videckis and White dropped out of Pepperdine after filing a lawsuit against Pepperdine University and women’s basketball coach Ryan Weisenberg. They claim to have been the subjects of discrimination and violation of privacy both on the court by Weisenberg and off the court by Athletic Coordinator Adi Conlogue. They claim this was a result of discrimination against their sexual orientation and relationship status.

The protest and the lawsuit are telling signs that the Pepperdine administration and student body as a whole needs to look at the possibility of opening legitimate venues for discussion, beyond Building Bridges. It needs to move toward clarifying exactly what the school plans to do or not do moving forward; this issue is not going to dissipate any time soon.

Pepperdine’s mission statement claims, “the student, as a person of infinite dignity, is the heart of the educational enterprise.” But it seems that not all students feel included in this enterprise, nor are they permitted the rights.

According to a recent Online Graphic article titled “The State of LGBT Affairs at Pepperdine University,” by Breanna Grigsby, Pepperdine’s four other schools treat their LGBT students differently than Seaver College does, and the article includes a history of recent LGBT events at Pepperdine.

The protest and the lawsuit are the most recent reflections of a growing student body and changing times, but the struggle for LGBT recognition and rights has been long-running. Seaver College, despite constant uproar by its students, seemed slated to watch as other schools on campus express efforts to reach the LGBT population.

Four years ago a movement for a gay-straight alliance called ReachOUT tried to gain official recognition from Seaver, but was denied on the basis that the alliance would be in contradiction to Pepperdine’s mission. This denial effectively marked Pepperdine as standing for its mission, but this action does not reflect the mission stated above.

After ReachOUT was denied, Pepperdine’s four other schools did not follow suit, and instead recognized the LGBT community in their own ways.

The School of Law recognized the LGBT Legal society and the Graziadio School of Business and Management has recognized Graziadio Reaching OUT, which has new club probationary status until October. The School of Public Policy and the Graduate School of Education and Psychology administration, staff, students and alumni have all expressed support for the community.

Although not all of the graduate schools instituted an organization, they have done two simple things that Seaver has not: recognized the LGBT community and given them legitimate support. Perhaps both sides of the argument concerning the advancement of LGBT support on campus here at Seaver could benefit from approaching the situation with more respect for the other side.

There must be a better way than what’s been done if we students are “the heart of the educational enterprise.” The road to a better Pepperdine can be found in the tradition of loving one another, beyond what the eye can see and what human judgment we have. It’s these things that cause the divide between the traditional culture we follow at Pepperdine and those who suffer judgment; prioritizing on both ends the advancement of what two sides believe are just causes. Instead, we must have a dialogue.

In addition, to deny students at Seaver a gay-straight alliance should not be seen as a move beneficial to the faith culture on campus. Rather, people of faith invested in the student body might put an attitude of love and support at the center, recognizing the need to listen to the students in the controversy instead of maintaining a feigned control driven by their beliefs only.

Looking through this same worldview, this attitude change within people of faith on any side, no matter what the outcome in the lawsuit or conflict on campus, will certainly never unhinge God’s hold over the campus or on the world. However, our focus needs to be on dialogue between those who feel wronged and those who want to fulfill Pepperdine’s mission to students, not to some, but all. 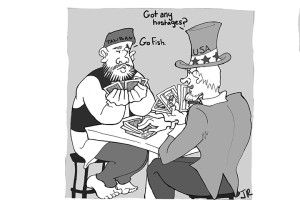 Art by Jenny Rustdad War is no longer a game of cards played with friends. When enemy soldiers are captured, America no longer...
Copyright 2013 Jupiter Premium Magazine Theme
Back to top