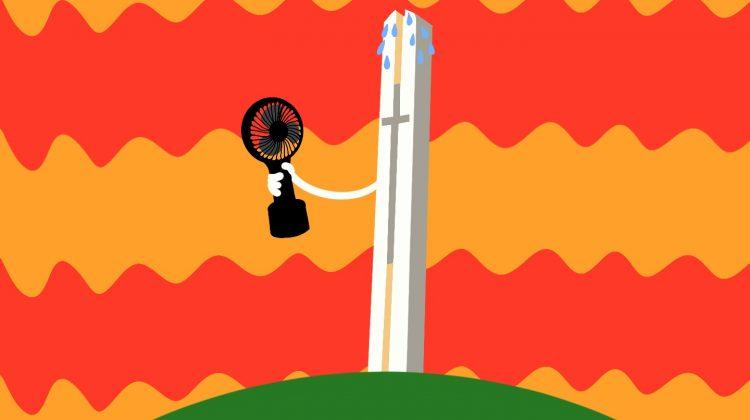 The sun is shining, the birds are chirping and Pepperdine students are once again suffering from the heat in residence halls that lack air conditioning.

While colleges and universities historically have forgone AC, temperatures both in and outside residence halls are heating up as climate change causes summers to exude blistering heat for longer amounts of time, according to a Washington Post article.

Nowhere is harder hit than the West — with temperatures increasing almost a full degree Fahrenheit over the national average, according to the Washington Post article.

From Aug. 31 to Sept. 9, temperatures in Malibu rested high above the 90 degree mark, even hitting 100 degrees Fahrenheit.

The temperatures make it hard to concentrate, to sleep, to breathe and to eat — putting students’ grades and physical and mental health in jeopardy, according to the Boston University article

For students who live in apartments such as Drescher, Lovernich and George Page, hot ovens and stoves used to cook exacerbate the problem. Fridges can overheat, spoiling food, which not only can make students sick — it also hurts their wallets.

As some room temperatures can reach over 80 degrees during high heat, many students leave their front door open to allow cool air to enter their living space. With this comes unwelcome guests — spiders, some students said.

Some students have resorted to using several fans in their bedrooms and common spaces, but as temperatures rise throughout Southern California, students have reported trouble finding fans as stores are quickly selling out.

Pepperdine’s shuttles are air-conditioned, but most shuttle stops are exposed to the hot sun, with little space to sit or find shade. This problem is especially concerning for those who live and park at Drescher and must decide whether to brace a hill in the heat or wait outside.

Some students have more than themselves to worry about — emotional support animals who, according to Pepperdine regulations, need to remain in the residence halls, are also at the mercy of rising temperatures.

Desperate to feel cool, some students have resorted to sleeping in air-conditioned common rooms where available.

Long-term solutions, such as the installation of air conditioning units in more suites or re-wiring thermostats to allow for a cooling setting, will greatly help students — especially as things promise to only get hotter in the coming years.

But these solutions take time and money. In the meantime, Pepperdine should consider having facilities inspect dorm spaces on the hottest days to ensure the heat is not so high it will cause injuries, and make sure a faulty thermostat or heating system is not adding to the problem.

Students have already started a petition for the University to implement AC in students’ living spaces. The petition has over 80 signatures with the goal of getting to 100 signatures from students.

Additionally, these problems do not only affect on-campus residents, as some off-campus accommodations do not have air-conditioning, and students may need to turn off their air conditioner to save the power-grid from blackouts.

For now, here are some ways to beat the heat:

Rising temperatures are dangerous — Pepperdine should take steps to protect students’ health, while students can try a variety of strategies to keep cool.