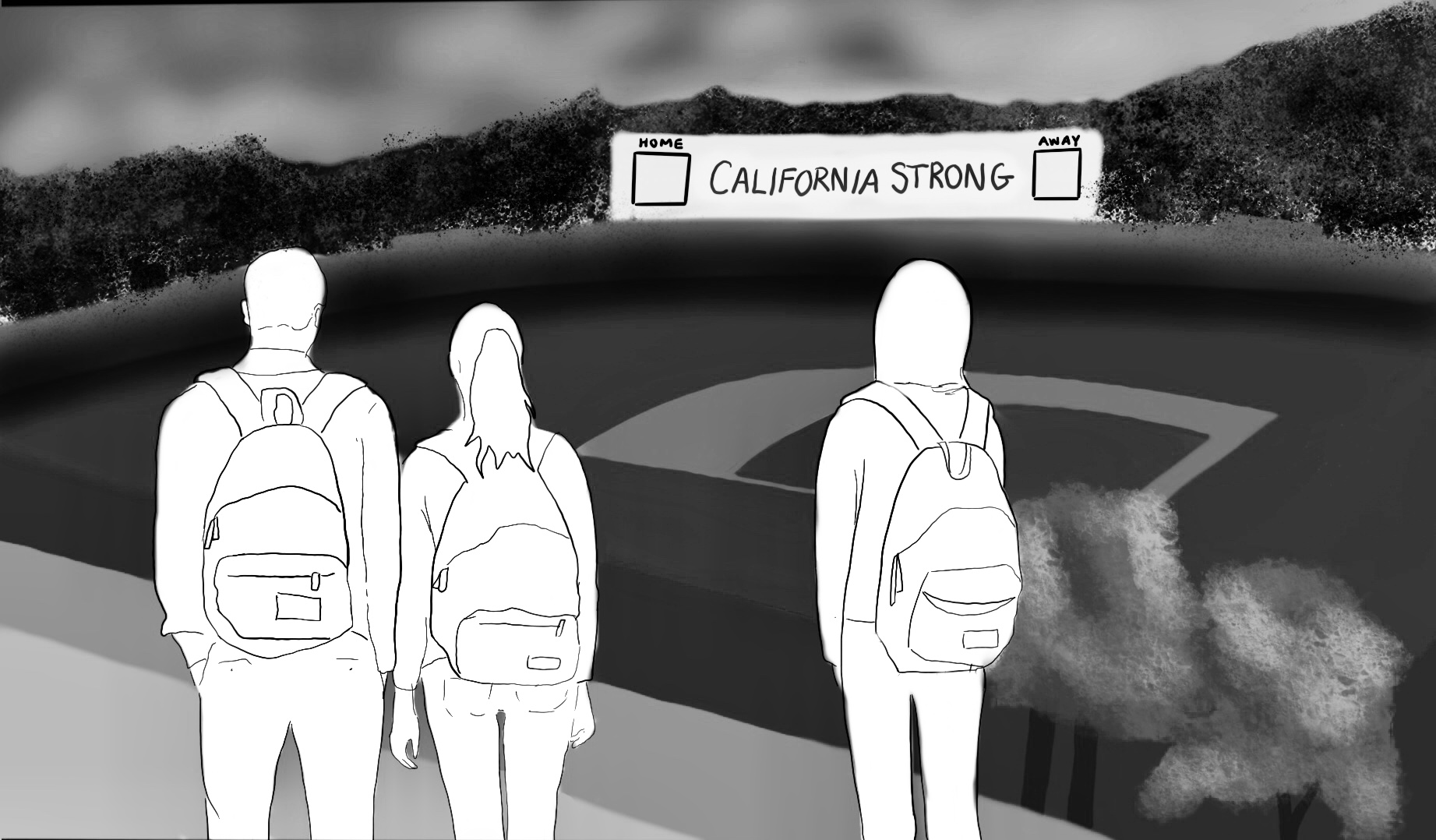 Following the tragedies that came to define the month of November for Pepperdine and its neighboring communities, those affected are relying on one another for comfort and hope for revival. Charitable events such as #CaliforniaStrong seemed to offer the beginning steps of healing, yet Pepperdine students were left with a sense of isolation from the community they call home and with whom they have been grieving.

Some of the biggest names in Hollywood and professional sports flooded Pepperdine University’s Eddy D. Field Stadium on Jan. 13 for the California Strong Celebrity Softball game, hosted by Christian Yelich, Ryan Braun and Mike Moustakas, alongside the organizations California Strong and the YMCA of Southeast Ventura County. But while a few faces stood out among the jam-packed event, including Adam Sandler, Jamie Foxx and Baker Mayfield, there was a distinct lack of Pepperdine student representation.

Many students felt excluded from the event that was meant to promote a sense of community for Malibu in the aftermath of the Woolsey Fire and Pepperdine University after the loss of freshman Alaina Housley in the Borderline shooting. As members of the Malibu community who are equally devastated by these tragedies, more Pepperdine students should have been incorporated in the event. Neglecting to include students upholds the view that Pepperdine is a separate entity from Malibu at large, when in fact Pepperdine and Malibu are all one united community.

Several aspects of the California Strong event left many students feeling detached from its overall purpose. For instance, the ambiguity regarding the admission fee had students questioning where the proceeds would be going. There were students who were willing to pay the $25 admission fee, as all proceeds went to those in need. However, students who felt deterred opted to watch from Dorm Road, which overlooks the stadium; hence many students were not immersed in the communal crowd.

Eventgoers were seen using the restrooms of the Debell House — which is where freshman Alaina Housley lived. Many felt that this use of a house that symbolizes the recent wound of the Borderline tragedy was inappropriate and inconsiderate of a community still in the infancy stages of healing.

Much of this confusion stems from Pepperdine’s ineffective communication to the student body and staff about the event. Though the event was featured on multiple Pepperdine social media accounts and their website, many students were unaware that the game was occurring until they saw its set-up earlier that day. Briefing students about the details of the event through official communications such as email is a vital step toward including students and limiting frustration.

The blocking-off of parking spots normally designated for students upset students and also prompted feelings of exclusion. Students who live on campus were forced to relocate their cars, and some Pepperdine students were even asked to move their burned cars. These students are members of the Malibu community and some also lost their homes, cars and belongings in the Woolsey Fire. Their inclusion in this group connected by tragedy is crucial for productive healing.

Though the baseball team was instrumental in the planning and execution of the event, some other students felt as if they had no say or consideration in the planning of the softball game.

However, students who make up Pepperdine are part of the Malibu community, and this game was theirs, too.

The feeling of unity the event attempted to project is especially important during this period of recovery for Malibu. Celebrity softball games and similar occasions which promote communal welfare should occur more frequently.

However, for subsequent events, a greater portion of the student body should have the ability to input ideas for these events. Town halls, attended by a variety of Malibu citizens including Pepperdine students, could be held to discuss the events — venue, activities, outcomes — to give all voices of the community a say in the planning of events meant to bring together said community.

If held on campus, there are many students who would be willing to contribute more to the event. Spirit squads, like those at sports games, could incite school and Malibu spirit among the attendees. Students could participate in the activities without feeling impeded by them.

If done correctly, these events could be big, communal and festive like Waves Weekend but geared, instead, toward the whole Malibu community.

Pepperdine’s and Malibu’s pains are communal, so let it not divide the community but reinforce it. Together, community members can be #PepperdineStrong, #MalibuStrong and collectively #CaliforniaStrong.