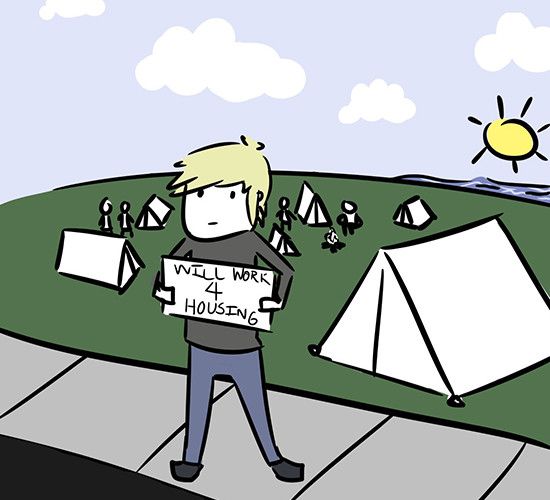 Being homeless is a terrible predicament for any college student. Unfortunately, that’s the current plight of many less-than-pleased Pepperdine students. Sitting in the Sandbar, Payson or even your 8 a.m. class, you have likely heard objecting voices in regard to the housing process this year.

The new policy of no summer interim housing due to Bible Lectures and the lack of viable options to combat this inconvenience (HRL recommended checking into a hotel) is just the tip of the iceberg of dissent floating around campus. After housing for the 2014-15 school year filled up in a record hour and a half, students left without housing are scrambling to find somewhere to live. Students berate Pepperdine’s inability to house a higher percentage of its student population. But to be honest, it’s hard to find something to say about the “housing crisis” that hasn’t already been said. What else is there? “Housing is too expensive.” “Malibu is too expensive.” “Incoming classes are too big, and there isn’t enough housing for everyone.” “Only having housing for 60 percent of the population isn’t enough.”

Sophomore Elaina Duran, who will be living off campus next year, said that the problem was mostly with finding people to room with. “It’s unfortunate, because people like me who couldn’t find three other people to live with ended up with no housing options. I’m lucky enough to have a car and a place off campus to live, but I know a lot of other people don’t. It just sucks that now some people are homeless.”

Besides Duran, there are scores of other examples, anecdotes and interviews, but they all relate essentially to the same bottom line: the system needs help. And that doesn’t just mean Roommate Gateway. The entire infrastructure of the way Pepperdine handles housing needs renovating.

But where does the problem really lie? Is there a single source, or is it a more complex compilation of factors than we originally assumed? Everyone seems willing to give their 2 cents on the matter, but very few people are making an active effort to solve the problem.

The understaffed and overworked HRL staff has unfortunately become a metaphor for the entire housing system. Although there must be a level of realism in acknowledging that we can’t expect perfection, this year has been perhaps the worst housing scenario in the university’s recent history. Students were rushing to find roommates in the short time between housing information being released and their registration date, and those who were unable to do so got pushed back in the registration line, which means most of them are now without housing.

Additionally, Pepperdine continues to admit larger classes each year. While the desire for a larger student community is understandable, it’s simply not feasible with the current housing setup.

Pepperdine’s requirement for all students to spend their first two years on campus seems more trouble than it’s worth. While living on campus is integral to building community, there are sophomores who are applying to live off campus; however, most of them will be denied, simply because of university policy. Allowing these sophomores off-campus could solve at least part of the issue, and theoretically leave space for some of the upperclassmen who want to live on campus but are unable to under current housing limitations.

Some have suggested that lowering or eliminating the housing discounts in place for many upperclassmen might remedy the supply and demand problem, but then the university runs the risk of not competing with off-campus housing rates and may again run into the “empty bed” problem they faced several years ago.

The core issue seems to be a need for more housing. Granted, that’s a large undertaking, but it’s one that the heads of the university need to strongly consider. The current trend of increasing acceptance and decreasing prices is undoubtedly appealing, but is only going to inflate the issue unless something is done to remedy the shortage.

However, the economics of the matter cannot be changed for this upcoming year. The reality is that many are still homeless, frantically seeking housing, or dissatisfied with their housing. The 400 upperclassmen that did find housing are “so blessed,” while many others have been said to be contemplating seeking refuge with staff members or pitching tent cities on Alumni. 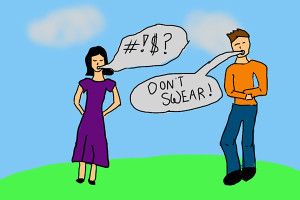 Art by Brooke Muschott Let me begin by saying that before coming to Pepperdine, I rarely cursed. If I was really angry,...
Copyright 2013 Jupiter Premium Magazine Theme
Back to top