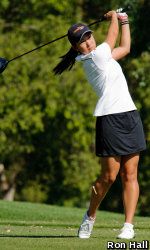 Pepperdine University student Liv Cheng excels in the game of golf and life.  While a unique skill set and competitive attitude have elevated her golf career, a friendly demeanor is what sets her apart.

Cheng, 18, maintains friendly relationships on and off the golf course.  Last year, Cheng arrived on campus and met her roommate Kelley Larsen, a Pepperdine volleyball player.  Instantly, the two clicked since they both devote the majority of their time to sports and academics.

The first time Cheng met her roommate, she greeted her with a small kiwi key chain from New Zealand.

“Liv and I get along very well,” said Larsen, 19, a sports medicine major.  “We are also pretty low maintenance, so living together works great.”

Friends describe Cheng as easygoing and relaxed.  “Liv is a really nice girl, and she’s an exceptional listener,” confirmed Lorraine Guillermo, a Pepperdine tennis player.  “She is certainly one good friend.”

Everyone on the Pepperdine campus would agree with Larsen and Guillermo about Cheng’s character.

“Liv is a very sweet and friendly person,” said Caitlin Racich, another Pepperdine volleyball player.  “She’s a great athlete, and I think it is awesome she is a kiwi!”

Originally born in Taiwan, Cheng’s family made the move to Aukland, New Zealand, at the age of 4.  There, Cheng studied at the renowned Macleans College.  She was a member of the school’s golf team for four years.  As captain, Cheng also earned the No. 1 position on the lineup.

After establishing herself as an elite golfer with polished and effortless proficiency, Pepperdine offered a scholarship.

Following her commitment to Pepperdine, it was obvious Cheng would achieve her desired success in golf and academics in Malibu, Calif.

Cheng says she selected the perfect school.  “The small size of campus and number of kids in classes are great,” said Cheng.  Also, I love the location, coach, golf program and academics.”

Since Larsen and Cheng have been roommates for two years, they have learned a lot about each other.  “Liv works really hard at golf,” said Larsen.  “It’s even easy to say she works very hard.

“Liv is not only extremely determined in school, but also in golf.  She gives her full effort to everything.”

Cheng manages the tough task of dealing with school and golf at the same time with enthusiasm.  Other collegiate student athletes might become overwhelmed with midterms the same week as important NCAA sport events.  Not Cheng.  She lives for the challenge.

Today, for highly talented athletes such as Cheng, self-motivation and confidence in their abilities prove to be the keys to achieving dreams.  “I’m determined to be a professional golfer,” said Cheng.

Most international students struggle to adjust to American culture.  The emotional roller coaster of missing out on family activities and home-cooked food may create a yearning to return home.  “I know I would miss my home if I were living in another country,” admitted Larsen.  “She deals with all tough situations really well by focusing on the positives.”

In Cheng’s room there is a New Zealand flag above her bed, along with pictures from back home.

Normally, Cheng flies back home over Christmas and summer break.  However,  she was not able to this past Christmas.

Cheng’s sister, Amanda, made the journey from New Zealand last year and stayed for a week.  “For me, it was cool seeing them interact,” said Larsen.  “They’re really funny together and make me laugh.”

The two star athletes have fun off campus as well.  Larsen and Cheng enjoy shopping and other activities.  “Once, Liv and I went line dancing together,” said Larsen.  “We absolutely had a blast.”

Cheng’s additional talents include playing the piano.  “Liv’s a great pianist,” said Larsen, happily.  “A couple of her songs are amazing.  It’s cool to find out new talents she has up her sleeve.”

Cheng and Larsen like playing pool in the Howard A. White Center.  “That was a while ago,” clarified Larsen, chuckling.  “It’s entertaining.  She does not have her own pool cue or anything, but she is a quick learner.”

When Cheng is not busy with golf, schoolwork, piano or pool, she watches “Grey’s Anatomy.”  She prefers movies such as “Inception” and “10 Things I Hate About You.”

Cheng’s favorite professional golfer Annika Sorenstam of Sweden.  “I admire her demeanor,” said Cheng.  “She is now retired, but back in the day, she dominated in the golf world.  She played perfect rounds.”

In addition to an appreciation for Chinese food and the All Blacks rugby team of New Zealand, Cheng enjoys reading “Harry Potter” and “The Hunger Games.”

As for her success at Pepperdine, Cheng keeps her schedule busy while not only perfecting golf, but also focusing on her economics major.

Originally, Cheng started her education at Pepperdine as a sports medicine major.  Later, she found an interest in economics and made the switch.  “I felt economics suited me better,” explained Cheng.

In their limited spare time, Larsen and Cheng enjoy comparing vocabulary terms and accents.  Words and phrases commonly used in New Zealand or any other parts of the world are known to puzzle Americans.  “Liv says some funny things,” said Larsen with laughter.  “She says jandals instead of flip-flops.  With her New Zealand accent, she makes fun of the way Americans say water.”

Sleep is a huge factor for a Pepperdine golfer with a hectic schedule involving multiple practices each day along with weightlifting and conditioning.  “She definitely likes her sleep,” revealed Larsen.  “She goes to bed at around nine.”

Individuals who succeed in sports and possess humble traits are rare in today’s world.  Cheng is one of the few that points the spotlight toward her teammates.  “I love my team,” said Cheng.  “It’s a really small group where everyone gets along quite well.”

This unique quality shall fulfill Cheng’s ultimate goal of qualifying as a professional player.

Cheng’s excellent average putts-per-round, strong mental game, energetic attitude and calm ability to handle pressure facilitate her effectiveness on the golf course.  Also, she has an enormous passion for the game. “I love to play golf,” said Cheng.

In her debut at Pepperdine in 2010, Cheng received All-WCC first team honors.  While averaging a 76.43 strokes in 28 rounds, Cheng achieved the difficult task of two top-10 finishes and three top-20 results.  In addition to her excellence on the golf course, Cheng was named an NGCA All-American Scholar and earned a spot on the WCC Commissioner’s Honor Roll list.

As an amateur in 2009, Cheng won the skills challenge and stroke play title at the Under Armour College Golf Combine.  There, she was named a first team All-American.

The Pepperdine women’s golf team is lead by head coach Laurie Gibbs, who is in her 19th year at Pepperdine and continues to produce a national championship contending team.  Gibbs led the Waves to a 2nd place finish at the NCAA Championships in 2002-03.

That year, senior All-Americans Katherine Hull and Lindsey Wright displayed outstanding performances.  Hull was named National Player of the Year, secured the Dinah Shore Trophy Award, and became a three-time All-American in her career at Pepperdine.

This past week in Maui, Hawaii, at the `Anuenue Spring Break Classic, Cheng tied for 28th place at 231.  She had four birdies on the last day, including three in the first round.  The Waves finished sixth with a total of 919 at the par-72 Kapalua Bay Golf Course.

"And your new Miss Malibu 2012 is…Brie Gabrielle!" Those are the words that would forever change the life of the determined,...
Copyright 2013 Jupiter Premium Magazine Theme
Back to top