Credit card fraud is not only one of the fastest-growing types of fraud but also one of the most difficult to prevent.

IT Senior Client Tech Analyst Sara Fernandez does not frequent gas stations, notorious for credit card skimmers, because she has an electric car. So when she opened her personal email to find 20 “Thank you for purchasing Starbucks cards” notifications, she was shocked.

“The first thing I thought is, ‘It’s my husband’s [card] because he goes to gas stations,’” Fernandez said.

When Fernandez’s bank said it was her card, she started tracing back her steps.

Though most of the purchases got denied, about $155 still went through. In total, the scammer tried taking over $1,000 from her card. Later, Fernandez saw a notification on her Apple Watch asking Fernandez whether she wanted to add a tip to her Starbucks order.

“I haven’t used my points for Starbucks in forever, I have like 840,” Fernandez said. “What someone had done is got into it and used all my points. They bought Starbucks cards, they have my email and now they have my points.”

What worried Fernandez the most, she said, is that her bank card was attached to her Starbucks Rewards, meaning the scammer had access to her card information.

Fernandez’ story is all too familiar for Daniel Miranda, current banker at Bank of America and former Chase banker.

“Fraud is literally the most common thing that happens at Chase and Bank of America,” Miranda said. “It’s not unusual for somebody to commit either check fraud, credit card fraud or debit card fraud.”

When a credit card fraud claim is made, a client will be given temporary credit within the first 12 hours while a bank performs its investigation, which may include going through camera footage and examining signatures, Miranda said. While most investigations take between six and 10 days, banks are legally given 90 days to complete an investigation.

“Banks have departments that do investigations and try to go after the criminals,” Miranda said. “We work with law enforcement to go after people who are committing the fraud to prevent future incidents from happening.”

After the bank conducts the research and determines the fraud to be legitimate, clients get to keep the money even if the bank cannot get the money back, Miranda said.

“It was our number one type of scam in California in 2018,” McFarland said.

Card-not-present fraud is a type of credit card scam where the scammer attempts to make a fraudulent credit card transaction while not possessing the physical card, as in Fernandez’s case. Since 2015, when EMV chip technology first emerged, McFarland said there has been a huge spike in online versus in-store purchases.

“How it changed the game is now these crooks that are looking for numbers and phishing for your information has gone off the charts,” McFarland said.

College students are especially at risk of being targeted by fake credit card companies touting low rates and low fees as well as fake online apartment and rental applications that seem “too good to be true,” McFarland said.

“Most employment applications don’t include bank information or credit card information but the scammers are including that and kids are filling them out,” McFarland said.

McFarland said the Federal Trade Commission and the BBB completed two separate research projects, both coming to the conclusion that millennials are 25% more likely to report losing money to fraud than people 40 and over.

“People may think that the elderly and seniors are being scammed more often than millennials, and it’s just the reverse,” McFarland said. “So yes, the volume of scams, especially credit card and mobile scams, has been taken over by students and millennials. However, when seniors are scammed, it’s typically for more money.”

Another way scammers are taking advantage of college students is finding documents with information that should have been shredded, including credit card information, applications for apartments and leases, bank statements and tax reports.

“People love to go through the trash, especially at dumpsters around colleges, because they probably don’t have access to a shredder,” McFarland said.

With increasing costs of school-related expenses, it is more important now than ever that students protect the funds they have, McFarland said.

“They [students] do need ways to be able to get grants, scholarships and anything they can to be able to supplement their income because of the cost of housing in California and schools,” McFarland said. “Guess what? Crooks know it. They’re putting out these fake applications and students are putting their banking and card information on these applications.”

One practical tool for reporting and tracking scams in a particular zip code, as well as warning consumers about possible scams, is BBB’s Scam Tracker.

For example, Scam Tracker reported 187 scams in California under the “credit cards” and “identity theft” category in 2019.

“Law enforcement uses this tool all the time, so they’re always contacting us and the FDIC,” McFarland said.

Looking into a bank’s insurance policies is also a form of prevention. Banking with a larger bank such as Chase, Bank of America, US Bank, Key Bank or Wells Fargo means one is covered under FDIC insurance. This protects clients against fraudulent charges and keeps an individual’s money secure if a bank suddenly went bankrupt, Miranda said.

More than half of an average bank’s deposits are insured by the FDIC. Photo courtesy of the The Motley Fool.

“People like that aspect of knowing that if something goes wrong with their account that the bank has their back, whereas banking with a Credit Union, for instance, they’re not insured by the FDIC,” Miranda said. 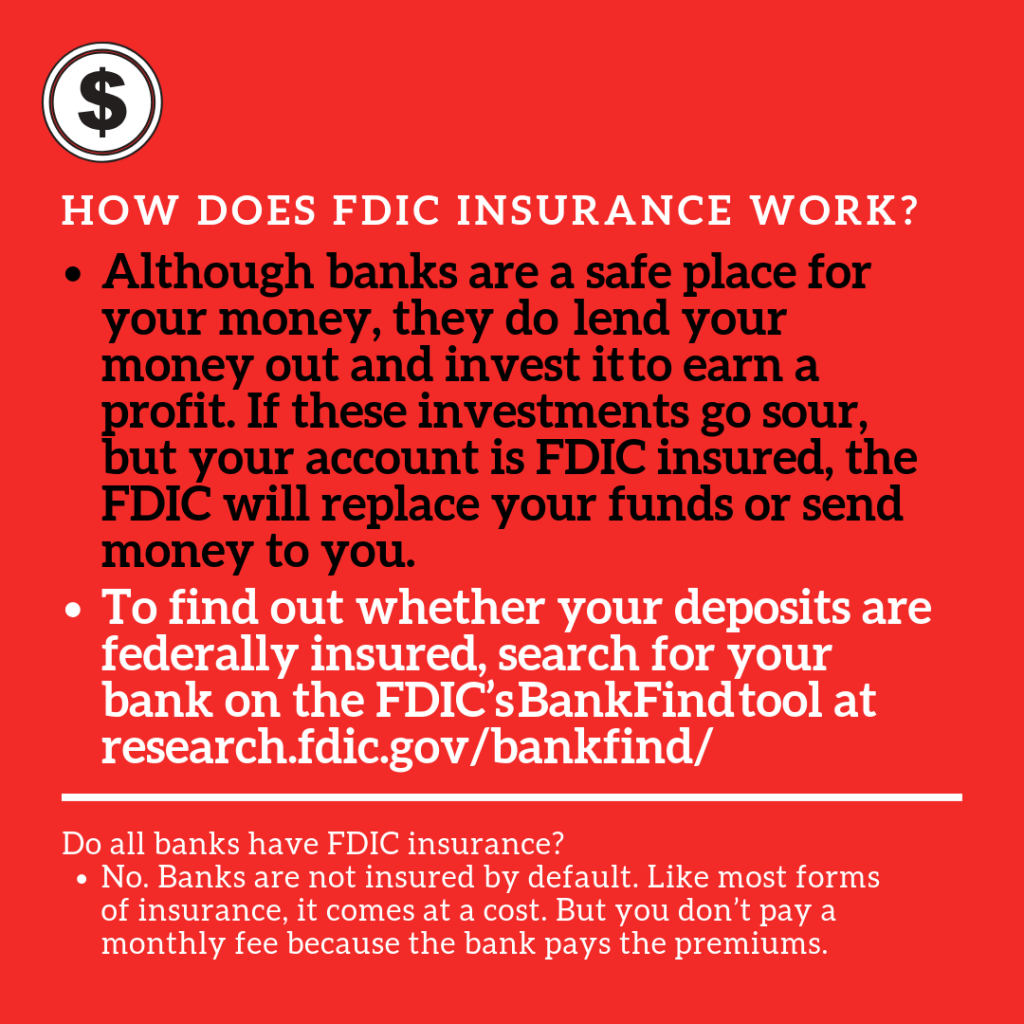 One way banks are combating fraud is chip technology, which recognizes the type of card used, whether that is a debit or credit card. If it is a debit card, the card reader will prompt the person to put their pin in.

If choosing between a debit and credit, Miranda recommends using a credit card because it uses the bank’s money instead of one’s personal money.

“Most credit cards have cash back features so you’re really getting more of the credit card anyway,” Miranda said.

In June, Bank of America cards started experimenting with a new card feature where the Card Verification Value (CVV) number changes automatically every four hours on a digital screen on the back of the card.

With money transferring apps like Venmo, Apply Pay, Google Pay and Cash App, Miranda said there is a decrease in credit card fraud claims since people started linking their cards digitally to applications like Apple Wallet.

“When you upload your card to your Apple Wallet, you have to use biometrics to allow purchases to go through, so either fingerprint or facial recognition,” Miranda said.

Why Apple Pay is more secure than using a credit card. Infographic by Anastassia Kostin.

However, although each transaction made through Apple Wallet generates a unique security code, it is still possible for scammers to hack into people’s phones and get access to bank information, McFarland said.

Especially with the rise of online shopping, it is important to only shop on secure sites, McFarland said. In 2019, it is estimated there are about 1.92 billion digital buyers worldwide, according to Statista.

“Check to make sure that you see the secure site mark at the beginning of the website that you’re shopping on,” McFarland said. 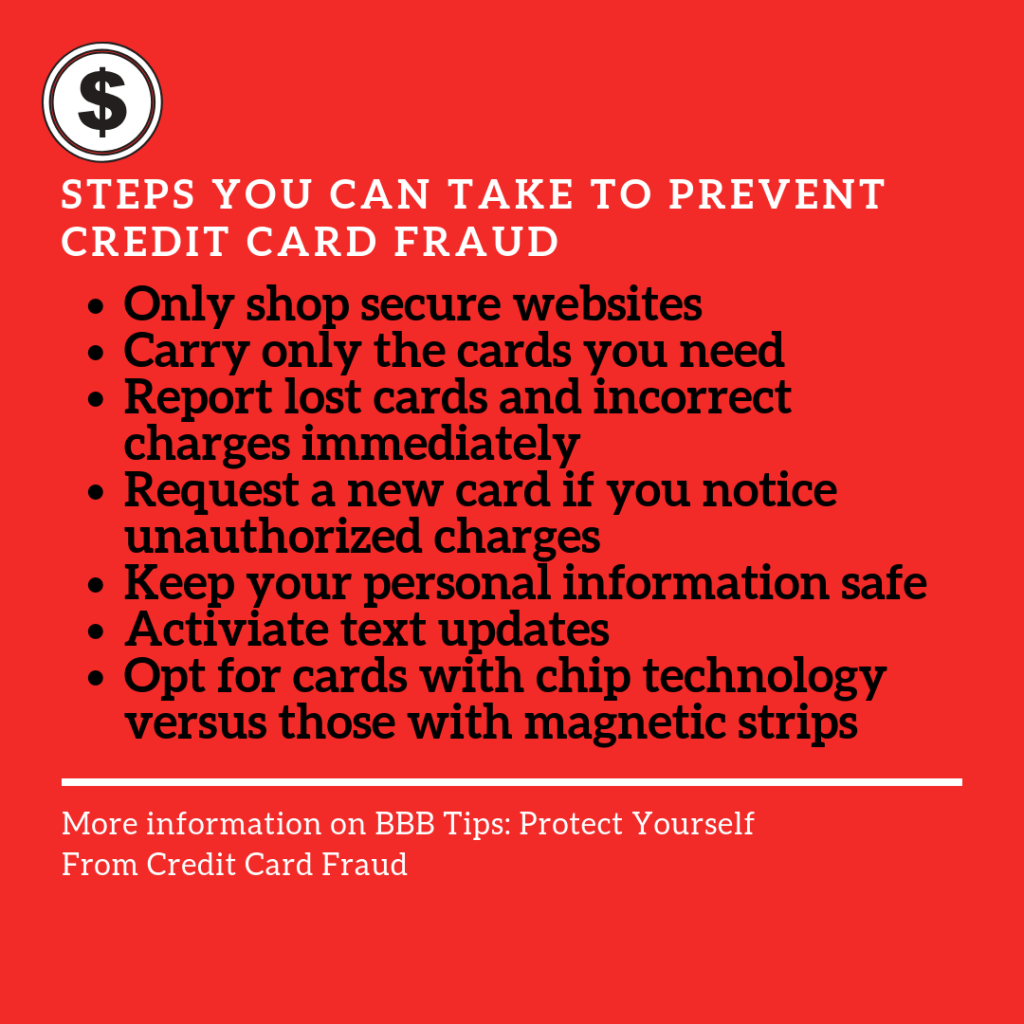 “The biggest thing of prevention is knowing where cards are,” Miranda said in reference to people that have lost cards but still have them linked to Apple Wallet. “It could not be a big deal but also somebody could have that card.”

Miranda also recommended downloading one’s bank app and checking it daily as well as setting up text or email alerts on one’s phone to be notified anytime a transaction exceeds a certain amount.

“When I’m helping people set up their new accounts, I guide them on how to set up alerts,” Miranda said. “That’s how much of a big item it is for me.”

McFarland stressed the importance of reporting lost cards or fraudulent charges immediately because the sooner credit card fraud is reported, the better the chances of getting that money back.

“Banks have this rule that after 60 days, we can’t promise that we’ll get you that money bank,” Miranda said. “If you report it within 60 days, it’s pretty much a guarantee.”

While fraud will never go away, it is important to take the right precautions with one’s finances as scammers turn to more sophisticated ways of theft, without needing access to the physical card.

“I think it’s created a paranoia,” Fernandez said. “I’m in IT, I’m in technology, this is what I do.”