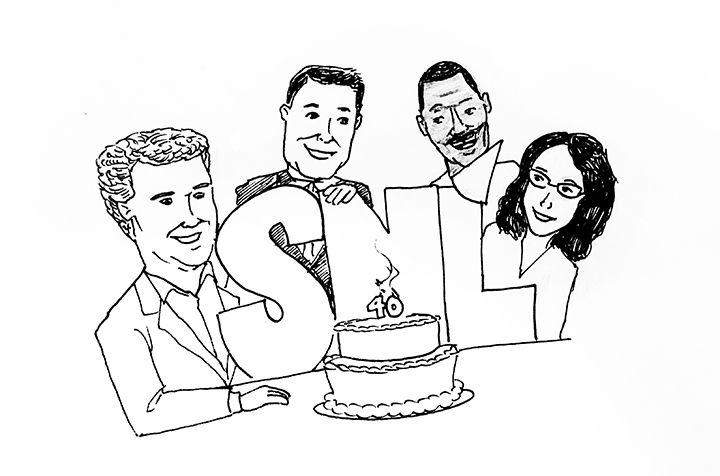 Humor seems to be something that the whole world can appreciate. No matter what tragedies, sadness or hardships the world is facing, we can all come together in these times and unite under comedy. “Saturday Night Live” has provided this unison in humor, and on Feb. 15, it celebrated 40 years of being on the air, making people laugh.

“SNL’s” revolutionary style and motives are still totally relevant today. However, “SNL” does something much more than just make people laugh every Saturday night at 11 p.m. “SNL” essentially makes people sit, relax and laugh lightheartedly at what’s going on in their lives and in the world.

The live sketch comedy show created by Lorne Michaels first aired on Oct. 11, 1975. It was the first of its kind, airing first under the name “NBC’s Saturday Night.” It features varying sketches, parodies and other tidbits of humor placed in a 93-minute segment. The sketches would jest at political, social and cultural occurrences currently going on in the world. Each episode featured a celebrity host, who would perform a monologue at the beginning of the show, as well as a musical guest, who would perform during the show.

“SNL’s” legacy has given us some iconic characters and sketches. Skits such as “Weekend Update” and characters such as Gilly and the Landshark have kept America laughing long after the skit has aired. The skits and characters on “SNL” make the show something different since there are reccurring characters sometimes, such as past ones like Gilly, Roseanne Roseannadanna and Landshark, but also new characters, like Girl You Wish You Never Met at a Party and Stefan, each time an episode airs.

Working with what is going on in the real world can be slippery, especially when it’s controversial or pivotal. “SNL” has covered just about everything shocking in the political and cultural world in the form of a humorous skit. Although they may not always be neutral on the matter, these events are portrayed from a lighthearted, funny point of view that creates a sense of calm and happiness in its viewers. For example, when Sarah Palin’s vice presidential campaign speech was jested at when Tina Fey portrayed her in a skit mimicking the speech, or the many other political satires throughout the years. Or when the controversy of Solange Knowles beating up Jay-Z in the elevator was made humorous with a fake apology skit from Solange, Beyoncé Knowles and Jay-Z.

The examples of news topics that “SNL” has used in the past to make people laugh are endless, but the ones that leave the most impact are the ones that make light of an extremely difficult time. After all, these occurrences aren’t funny at all, but “SNL” has a regular time slot at 11 p.m. every Saturday night, so the show must go on even in the toughest of times.

The effects of 9/11 shook the United States with uncertainty and horror, and “SNL” was scheduled to air the Saturday following the attack.

Reese Witherspoon was the scheduled celebrity host, and she almost considered not performing due to the sensitive nature of the time, according to New York Magazine. However, creator Lorne Michaels told Witherspoon that her appearance would make all the difference in the world. The city was “quiet and eerie,” according to Witherspoon, and Michaels said, “The world needed to laugh, there’s such an importance in what we do.” Witherspoon, despite her fear of further attacks, made her scheduled appearance on “SNL” for a show that would prove to make people laugh in a time of crisis.

It is times like those following the 9/11 attacks that it is made evident just how important humor is for people. Humor is great in the good times. But humor is especially important in a time of need. Instead of hanging onto all the negativity in the world, laugh. To take your mind off of something terrible that’s just happened, laugh. It seems that humor can solve any problem, even if it’s only temporary.

Making people laugh in both sad times and happy has been “SNL’s” goal for the last 40 years. “SNL’s” 40th anniversary show was not just a culmination of stars and skits that had made an appearance during its four decades of airplay, though this was also true. The celebration of 40 years is the perfect example of how “SNL’s” shows and legacy have made people laugh in the times they most needed it.

Dogs on Campus: Are We Barking Up the Wrong Tree?

The French Alps plane crash tragedy has left many looking for explanations as to why this occurred. According to an article...
Copyright 2013 Jupiter Premium Magazine Theme
Back to top