Ah, Valentine’s. The day of the year during which you’re formally reminded about the bleak state of your love life. You’re probably thinking, “It’s OK, right? Valentine’s Day is just a holiday created by Hallmark to boost card sales, right?” Sure, keep telling yourself that. Other couples were exchanging boxed chocolates on Sunday, while you were eating a tub of Ben and Jerry’s and watching “Grey’s Anatomy.” But fear not, you’re not alone. Not only are there other singles on campus, there are even single athletes. Let’s meet the free agents:

1. Where would you take someone out on a first date?

Patricia Wong: Go to Santa Monica Pier at sunset, go on the Ferris wheel, play games and then have dinner.

Michael Fischer: First date has to be Cafe Crepe — have to watch out for PCH though, heard people pop a lot of tires on there.

2. Who is your celebrity crush?

3. If you had one day left to live, what would you do?

Sahith Theegala: Without a question, hang with the family.

Patricia Wong: Hang out with my family somewhere relaxing and talk about old memories and eat some good food.

Michael Fischer: If I had one day left to live, I would have to play some volleyball, get some good food and probably pull some pranks on famous people.

4. If you could trade lives with someone, who would it be?

Michael Fischer: I would trade lives with Jay Z, and then I would use his money to get Pepperdine some nice perks such as zip lines or anything to make us walk less.

5. If you won the Powerball, what would be the first thing that you would do?

Patrica Wong: Buy each member of my family a car of their choice.

Michael Fischer: I would buy a car so I could take girls on dates. Also I would buy a beach house for when I live off campus with the boys.

Julianna Chan: Give some money to my parents.

6. Would you rather live on the beach or in the mountains?

Sahith Theegala: Oh, mountains for sure.

Patricia Wong: Beach for sure.

Michael Fischer: I would rather live on the beach. Girls don’t go up in the mountains.

7. If they made a film of your life what star would you like to play you?

Michael Fischer: I would want Zac Efron to play me, because all the girls would go see the movie.

8. If you could take a date to see one band in concert, who would it be?

Michael Fischer: Dave Matthews Band without a doubt, or Logic. Logic is pretty sick too.

9. Where do you see yourself in 5 years?

Patricia Wong: On the LPGA tour and traveling the world.

Michael Fischer: I see myself trying to live out here in California. If not, I’ll be back in good ol’ Pennsylvania coaching my old high school volleyball team.

10. Favorite team on campus other than your own?

Michael Fischer: Favorite team other than volleyball on campus would be the baseball team. Their freshmen are super funny and always fun to go out with.

11. What’s the most important character trait for a potential significant other to have?

Sahith Theegala: I’d have to say either honesty or modesty.

Yes, Valentine’s can be difficult for the lone wolves out there. But just remember, Michael Jordan was cut from his high school basketball team. So let that overused sports metaphor console you as you embark on another semester of soulmate searching. 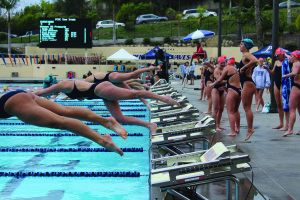 Photo Courtesy of Pepperdine AthleticsThe Pepperdine Swim and Dive team has had a fantastic 2015-16 season, so it only makes...
Copyright 2013 Jupiter Premium Magazine Theme
Back to top