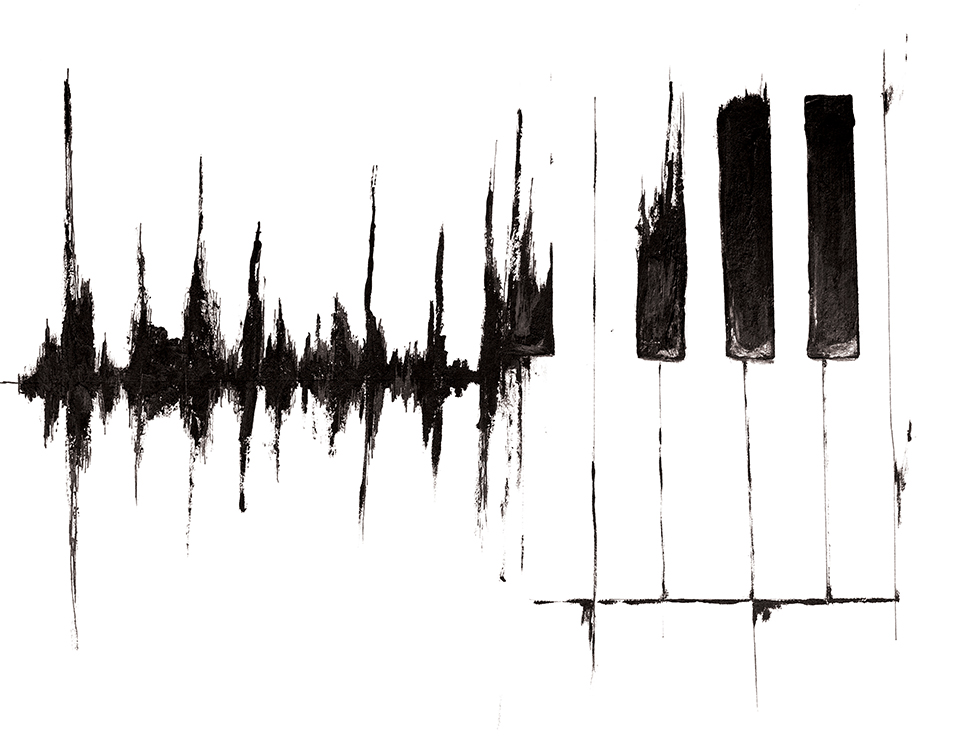 Milan Loiacono contributed to the reporting in this piece.

Music has the ability to elicit a wide spectrum of emotions.

It can create suspense in a film scene.

Help someone cry through their first heartbreak.

Music as an art form is an experience, a mood, a feeling. Musical styles express various degrees of light and dark, playing on tension between the two to convey particular messages and provoke emotional responses. Generally, pop or acoustic music is associated with light, and metal or hard rock music with darkness. Tonal contrast and varying instruments stir up different feelings for listeners, while the lyrics give meaning to the music itself.

A major chord, made up of the first, third and fifth notes of a scale, sounds much brighter than a minor chord, which is often described as having a sadder, more ominous tone. Suspended and diminished chords omit certain notes and add others, acting as transitions and contributing color and tension to the sound of a song. These chord progressions add flair and drama to a piece of music, playing upon dark and light tones to create mixed resonance, or vibration of sound, in music.

“[Composers] tend to work within these very established codes,” Screen Arts Professor David Madden said. “Happiness would be implied by using major types of chord arrangements. … Darker things are usually conveyed in minor expressions. Also thinking in terms of instrumentation, in this way they tend to be communicated and performed in often highly technologized ways — in other words, using synthesizers or computers.”

Music is a mobile and highly emotive art form, as its universal understanding allows it to reach a broad audience. Composers use particular tones to enliven and bring out different emotional qualities in people.

Music major Emma Ujifusa noted that this variability in interpretation can create a certain gray area in how light and dark are perceived in music.

“The purpose and intention of a piece is entirely up to the interpretation of the performer,” she said. “It’s important to consider why a chord makes you feel a certain way — such as asking why a major chord makes me feel happy while a suspension or diminished chord makes me feel this tension.”

While major and minor tones in relation to deeper and higher melodies reflect the technical tension between light and dark, the meaning behind these musical themes lies much deeper. Ryan Board, music professor and Pepperdine Concert and Chamber Choir director, reflected on perspectives of light and dark throughout history.

“If you [were] a somber and morose person, then somber and morose music was going to affect you more than a person who wasn’t that way,” Board said. “Or if you’re a really joyful, happy, boisterous, outgoing person, that you would really, you know, connect to this kind of music. But they literally believed that you had these humors, or these vapors in your body, and that they – kind of like a spirit – they were moving around and different music was going to move you in a particular direction.”

Historically, darker, more primal pieces of music have warranted wariness and controversy in societies, Board said. Board mentioned Igor Stravinsky’s composition and ballet “The Rite of Spring,” which drew upon “throbbing and thumping rhythms” to evoke raw emotion. The ballet itself featured primitive and jolting dance moves paired with symphonic bursts of sound. The performance was so provocative that it sparked a riot the night of its Paris premiere in 1913.

“Stravinsky was trying to get at something really primal, what are sort of the human primal instincts, about rage, you know, reproduction, procreation, … anger, lust, all these things that are very sort of biological, human, fundamental, … things that have to do with survival,” Board said. “So because I think those are considered sort of primal, rudimentary and not sort of dignified, elated human states of mind, they have often been classified as ‘dark.’”

This rawness touches on overarching themes often associated with human nature. Board emphasized that Stravinsky’s music mirrors the darkness of human characteristics and behaviors, encapsulating this primitive essence in its simple, broken-down instrumentation.

The narrative within the noise

Thematic elements of light and dark develop like story plot lines — a series of notes bound together much like the words and pages of a book.

Music is subjective, said David Kellogg, KWVS Radio director of operations. Human beings are taught that there is good and bad in every story, with light winning over dark.

Kellogg said there’s no formula for storytelling in music, as its narrative framework ebbs and flows, lacking any static structure. Music is not defined by a definitive beginning and end; people often meditate on a song long after it’s finished playing.

While music holds certain levels of meaning, individuals can draw other conclusions from listening to a song.

“Light and dark in terms of music is experiential,” Kellogg said. “It’s alive and it changes from moment to moment, year to year … and it’s totally unique from person to person as well.”

In some ways, darker storylines have a stronger resonance with listeners. Senior Noah Racey wrote in an email that the superficial connotations of light versus dark don’t always reflect reality.

“For people who aren’t in the best place mentally or spiritually, bright and happy songs become alienating — they don’t reflect an experience that is true to life,” he wrote. “In a sense, darker thematic content in music is ‘more true’ than light thematic content. You see the irony there? In this case, it’s light music that’s obscuring something in the shadows and dark music that’s bringing the truth into the light.”

Racey wrote that the styling of songs can be used to manipulate previous expectations of light and dark. He referenced Foster the People’s “Pumped Up Kicks,” questioning why there wasn’t more controversy over a song that describes a school shooting.

“Maybe we weren’t so sensitive to the gravity of the issue at the time,” he wrote. “Or maybe people just didn’t realize what they were listening to. Either way, I think it was a brilliant artistic decision to draw people into a false sense of security with a catchy pop tune only for them to slowly realize what the lyrics of the song were actually about.”

Artists develop these themes during the songwriting process, manipulating and transforming light and dark conventions to create new pieces of music. Malibu Pacific Worship Leader Dillon Nelson referenced musician Jon Foreman’s analogy as a reflection of his own songwriting experience.

“Songwriting is like being an archaeologist,” he said. “You go around every day with a shovel and dig. … Every once in a while, you come across a lost city. Going back, darkness being uncertainty, not knowing what you’ll find, versus light sorta being that ‘aha’ moment of certainty.”

Nelson said he typically writes in times of darkness, exploring different emotions and ideas in his search for clarity. He uses songwriting as a means of bringing attention to certain emotions or issues.

“When I write songs, it’s usually because I have a question,” he said.

Nelson said ideas and emotions become more transparent as he writes. There is fear in the darkness, he said, but writing and performing music is like turning on a lightbulb.

“Through that songwriting process, I kind of bring these issues to life more. … A perspective that you once had might be completely different from when you stopped playing that song or listening to a song. There’s this actual change that happens, or light, clarity.”

Parmelee also reflected on how he navigates the tension between light and dark when composing music.

“When you want to have somebody who can have these moments of light, you might start to have them build,” he said. “There are little glimmers in what’s otherwise darkness, and then they develop. … Several minutes in, you’re moving towards this amazing, ecstatic, uplifting experience that comes from this, you know, sort of climax or crescendo that you reach that you wouldn’t have felt if you wouldn’t have started in darkness.”

Music has a variety of different textures, layers and tonal qualities, making it a complex medium that can be difficult to describe. But what if music were visual?

While most people are limited to interpreting music in an auditory sense, people with synesthesia have the ability to perceive music visually.

Synesthesia is a perceptual phenomenon that blends two or more senses. For DBMK band member Kyle Knudsen, this means that sounds have color, taste and sometimes texture.

Knudsen said he’s had synesthesia for as long as he can remember. He also considered the impact it has had on his roles as a musician and producer.

“It’s often an asset … but as someone that is interested in the creation of music, it … certainly dictates decisions in the creative process, which I’m trying to learn how to let go of. Because sometimes I feel as though I might close myself off to certain decisions just based on trying to maintain some sort of, like, static in the color palette.”

Knudsen explained that for him, different genres of music spark specific colors. He described organic sounds, such as acoustic or slower Americana styles, as having dimmer earth tones and softer pastels. Jazz triggers purple and deep blue tones. Heavier rock consists of reds, pinks and browns. Latin pop has red and purple sensations, and pop music comes across as yellow and pink.

The dynamics, energy, tonal and harmonic characteristics of a piece determine how bright Knudsen’s perception of the color is. For example, a loud concert will be more vibrant than music played in a small room.

When discussing how themes of light and dark contribute to a piece of music, Knudsen said tension is the push and pull between light and dark. Although drastically different on the surface, two genres that express this contrast dynamically are classical music and electronic dance music (EDM).

“When you’re talking about the experience of the two genres, they’re inherently the same,” he said. “It’s that there’s two ideas shaking hands. One’s just made through computer programming and sequencing and the other is made through doing the same exact thing but it’s written on paper.”

Knudsen said the tension between light and dark comes from a search for satisfaction — the contentment that arises once the conflict in a song has resolved itself.

“The release, of course, is that satisfaction,” he said. “The tension is gone and it’s like, ‘Oh yes, we’ve arrived.’”