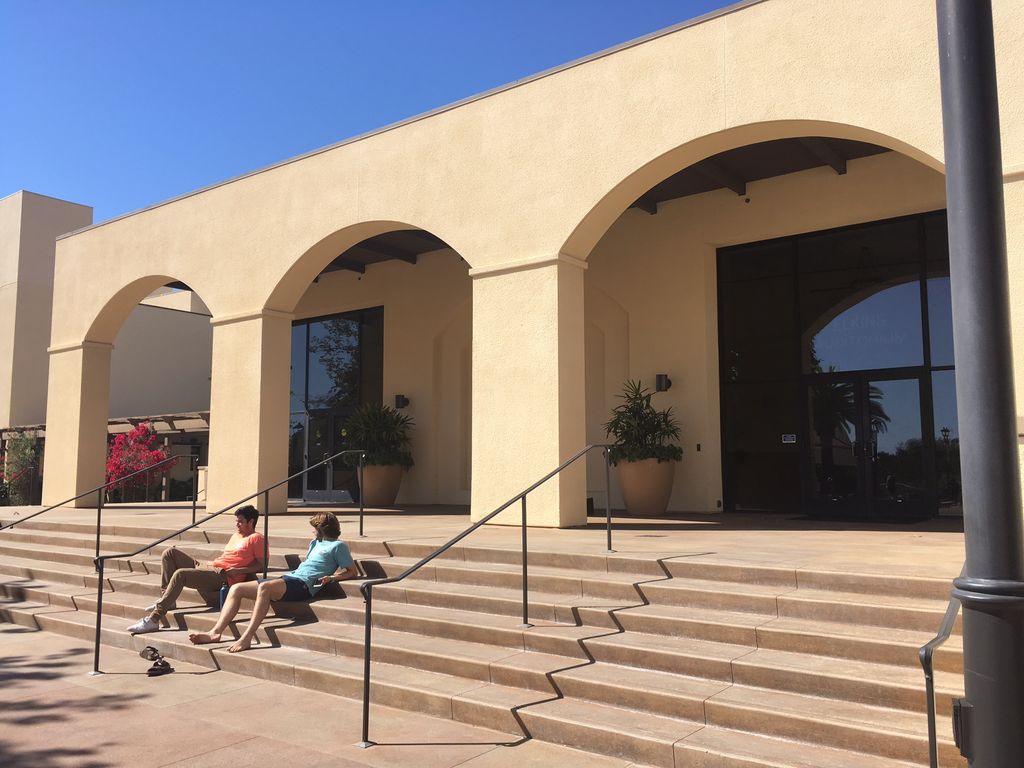 Students walked into a room that was full of awkward silence where they were handed a little white piece of paper and instructed to sit down. It was getting close to showtime and all the attendees were seated, but Elkins auditorium was still mostly empty. After a couple of minutes of small talk, the room was quieted.

The screen at the front lit up as the lights were dimmed. The clock struck 6 p.m.; it was officially time for the second Presidential Debate between Hillary Clinton and Donald Trump. The room grew quieter as the debate began, however after the second question was asked the tension was released and the students began laughing.

Republican nominee Donald J. Trump faced the Democratic nominee Hillary Clinton for their second Presidential Debate on Oct. 9. The debate took place in Washington University in St. Louis, MO and lasted 90 minutes. It was moderated by Anderson Cooper and Martha Raddatz and included questions that came directly from the small audience of undecided voters that attended the debate.

According to the Pepperdine SGA’s Vice President of Administration Austin Welch, Pepperdine SGA and the debate team set up an event that invited Pepperdine University students to watch the debate together at Elkins auditorium in an effort to get more students involved in the election process.

Abi Smith, coach of the Debate Team and assistant director of Forensics and professor of Communication, said she was excited to offer an opportunity that would allow students to get more involved with politics in their country.

“We are interested in offering as many opportunities for students to get involved in the political process as possible and create informed citizens,” Smith said.

Smith proceeded to share her concerns on the media’s influence on young voters and how it might affect them.

“As a professional, I am actually kind of concerned about the content of the debate given the recent media coverage. I am hoping the students are willing to recognize it for what it is, and desire more from their politicians and their media, and want to look into issues deeper, and want to participate in our democratic discourse instead of looking at it and feeling disenchanted with their political process. I hope that they look at it and feel motivated to bring the discussion to another level,” she said.

Freshman Kylee Ferris, a member of the debate team, discussed the involvement she has noticed from her friends and classmates in this election cycle.

“The political climate is rough. It’s definitely interesting because it’s sad that people are finally old enough to vote and no one wants to vote,” she said. “Ultimately we are voting for people who are going to rule the country.”

When asked before the debate whether she would vote, Ferris said she was certain that she wanted to be an active and informed citizen.

“Honestly, I feel like at the end of the day there is going to be one candidate that you can agree with a little bit more than the other and I don’t think that you should just waste your vote by not voting at all,” she said.

However, when Ferris was asked what she thought after the debate, her opinion had shifted.

“I feel like neither of them are fit to run the country and I wish we could just start over, to be honest,” she said. “My opinions definitively have changed about both of them and, yeah, this country is doomed.”

Ferris said she will still be voting in November.

Welch urged students to get involved in the political process. Welch helped organized the event and said he is looking forward to Election Day.

“If you choose not to exercise that civic duty, that’s not doing a service to your country and you need to be able to speak your voice and say what you believe in,” he said.

SGA and the debate team helped gather a crowd of approximately 50 students. During the event, they handed every student an anonymous survey asking who won the debate and who are they were voting for in the Presidential Election.

According to the debate team’s Facebook page, 71 percent of the students that attended the debate said Clinton won, 20 percent said Trump won and the remaining 10 percent had a different response or no response at all. Forty-six percent of the students said they would vote for Clinton, 20 percent for Trump and the other 34 percent said other or had no response.

Smith shared her fear about the political cycle that students are living and how that might affect their decision to vote.

“I am really fearful that students and people that are voting for the very first time are really discouraged by what’s happening in our political process this year and I just really hope that they use what is happening to light a fire under them and so that we can do better instead of backing away from the political process,” she said.