If it wasn’t for his father’s dedication, second basemen junior Joe Sever may never have gotten as far in baseball as he has.

During his Pepperdine career, Sever was ranked first among all West Coast Conference infielders with 58 double plays completed and 228 assists. He was also the Waves lone grand slam of 2011.

For Sever, playing sports has been something that he has done since early childhood. “I grew up in a really sports- oriented family,” he confessed. “Since I was a kid, baseball and football were my two favorite things.”

During his senior year in high school he was honored as the San Jose High School Athlete of the Year in 2009. He mentioned football as his second most favorite sport. “I loved football in high school, but after two years of playing both sports, I started focusing on baseball more.”

High school proved to be only the beginning of Sever’s successful baseball career.

Sever was one of three Waves who played almost every single game his freshman year. He led the team with a .310 batting average, 37 runs scored and three triples while starting 54 games at second base. His contributions did not go unnoticed and he finished the season of his freshman year with the 2010 WCC Honorable Mention and selection to the All-Freshman team.

Sever has been a San Francisco Giants fan since his early childhood. As the nephew of legendary Super Bowl-winning quarterback John Elway, Sever recalls “being in sports for his whole life.”

Sever spent his last summer learning in the prestigious Chatham Anglers of the Cape Cod League. 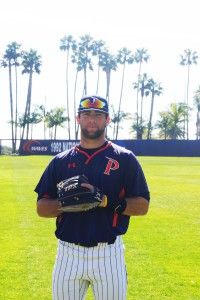 “Going there and succeeding at the games gave me a lot of confidence I could feel that my level of play improved a lot,” he said. According to Sever, tournaments played at the Cape Cod League were the most memorable in his sports career.

“I played in a big league in Massachusetts that is the highest talent for college baseball,” Sever said.

The team started its season on Feb. 17 when Pepperdine shut out No. 19 Oklahoma (7-6). Sever said that he is excited about this season as it will offer many opportunities to show good game.

“I think we started great. Coming out and taking two against Oklahoma was really important for us. They are a good team and they got a lot of recognition over pre- season being top two in the country.”
“It increased our confidence and proved that we can play with any team,” Sever said.

“I would like to keep playing for as long as I can and make successful career in pro sport,” he said about his future plans.