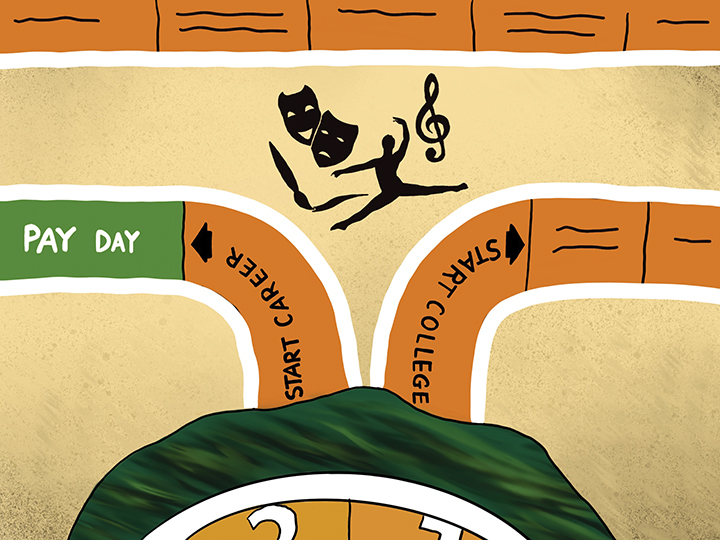 There are many creative majors offered at Pepperdine University, such as music, art, creative writing, screen arts and many more.

It is important to be conscious of the real benefits that come with getting further education in these creative courses. For instance, many people wonder why they should waste time going to school to study creative writing when they could just spend that time writing instead.

In general, studying a creative major at college forces pupils to be in an environment where professors routinely grade them, which ultimately refines their craft.

Hannah Collins, a graduate who studied fine arts and creative writing, revealed how “the rigorous structure of education — whether full or part-time — can be ideal for those of us who thrive within that kind of environment, and you might be surprised to find yourself in that category. Actively receiving feedback, week after week, incentivizes good writing behavior, and having others depend on you for the same will hone your study of, and appreciation for, the craft.” She wrote this in the article, “Is A Creative Writing Degree Worth Your Time (And Money)?”

She now spends her time writing, drawing, designing and podcasting. Collins is a clear example of how rather than university inhibiting talent, it inspires a person’s gift and allows that talent to grow.

Also, schools present students with great networking opportunities. Most of the time peers who met at university end up assisting one another in the future. This is evident in the interview The Hollywood Reporter did with Ryan Coogler, the writer and director of “Black Panther.”

Coogler mentioned how “the biggest thing [he] walked away with from film school was … a lot of [his] colleagues.” He then spoke about how he met the composer, who he has collaborated with on many films at his film school, as well as his editors and fellow producers.

He concluded, “[t]he community was the most valuable thing” that going to school gave him. This reiterates the value of receiving a creative education; creative major students can find others who share a similar passion.

Moreover, these students are able to be constantly surrounded by people with a multitude of life experiences that differ from their own. This experience alone can influence a student’s writing style and most likely even improve it as their work may begin to gain more depth. However, there are also clear instances where college may not be seen as a necessity for chasing a creative dream.

Over the past few years, university tuition has steadily increased. Even Pepperdine’s tuition has become more expensive. From 2016-2017 it was $50,022, and now in 2019, tuition costs $73,040. This number alone will be daunting to many students, especially to those that come from financially unstable households. Although colleges offer financial plans, many students end up in debt due to an accumulation of loans.

This is a reason why some creatively-inclined prospective students may choose to opt-out of the college option and work instead. Nonetheless, many successful people in the entertainment industry once faced this predicament but decided to stay in school.

Miles Teller, who has acted in movies such as “Divergent,” graduated from the Tisch School of Arts at New York University, where he studied acting. Teller “racked up $100,000 in student loans he says he still hasn’t paid down,” as Carl Swanson noted in his Vulture article, “Nobody’s Stalking Miles Teller: The Sundance Breakout on That Awkward Moment, Fame, and Getting Out of Florida.”

But despite that obstacle, Miles Teller was still able to succeed. It is necessary to acknowledge that some people may not be willing to take that risk, which is completely understandable.

For students who end up at school or who decide to take a different route, it is key that they build a strong work ethic. Colleges make it their goal to instill this sense of diligence into their students, which ultimately helps them hone their craft. All of the artists that were listed only got to where they are through determination and endurance.