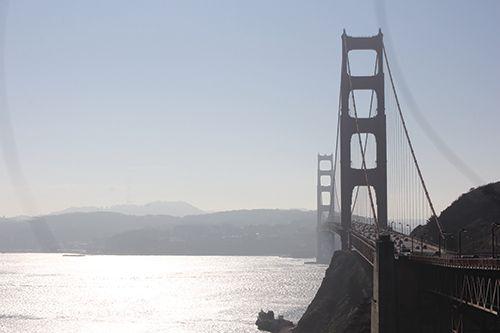 The four groups focused on the red movement with the prisoners of Alcatraz, the go-green movement, the Black Power movement and the freedom of speech movement. The trip included adventures to Berkeley, Alcatraz and the scenic Golden Gate Bridge, as well as personal adventures into the city in smaller groups.

The outstanding story of this trip was not the grand adventures taken but the impressive impact of the trip on the faculty and students who participated, as demonstrated by the enthusiastic reactions from participants following the experience.

In addition to soaking up the culture of San Francisco, students took their roles as community citizens to heart, according to sophomore Anthony Boffman.

“After lunch everyone gave their leftovers to a homeless person. That says a lot about the pride of Pepperdine, because no one told them to do that,” Boffman said.

The theme of spontaneous generosity and community investment carried on throughout the trip as students spoke of devoting their time to learning about the impact and value of a strong community, Boffman said.

The most impactful moment of the trip that he learned was, “There is a world bigger than my own, and the best way to face it is through community,” Boffman said.

Also attending, Communication professor Caitlin Lawrence said she was impressed that the students took complete ownership of their learning and took the time to really ask and invest in the experts on the trip.

After their outings, students had small-group time to discuss their findings. Lawrence said this was her favorite part of the trip as “students asked questions about citizenship and social justice and the role faith plays in how you respond to social justice.” Lawrence said she was excited about the genuine interest Pepperdine students had in social movements.

“Some people think kids of this generation are apathetic, but students at Pepperdine really care about things, and experiences like this can serve as a catalyst for students voicing their desires for change,” Lawrence said. Even if nothing incredibly specific results from these ideas, “its exciting that those conversations are happening.”

Sophomore Elaina Duran participated in the free speech movement group. She said after the trip she felt inspired to get more deeply involved with the groups she is passionate about and promote the beliefs that are important to these organizations.

“No matter how small you are, you are a ripple in the pond,” Duran said. “I came back feeling like I really learned something.”

Sophomore Matthew Jones said he was most impacted by the speakers, particularly the one representing the Black Power movement.

“It was interesting to hear his side, and it gives you a good wall to bounce off of as far as getting a clear picture of who they were as a group,” Jones said.

Jones said he found it interesting to learn about this more aggressive movement in contrast with the passive actions that are usually celebrated.

Lawrence said she was excited that multiple departments came together on this trip and that it was faculty-run. Past trips have been outsourced to outside travel groups without the touch of Pepperdine faculty organizing and selecting the speakers for the students.

The inclusion of Pepperdine faculty on this trip helped make it more relatable to students and teachers alike, according to Lawrence. Duran said she felt the benefit of having professors on the trip, as it was easier for her to relate to them. She liked getting to see how their passions in various fields of study worked in the outside world.

As a result of this experience and celebration of Martin Luther King Jr. Day, Boffman said: “There is a huge power in people, and if you get enough people to fight for something, there will be change.”