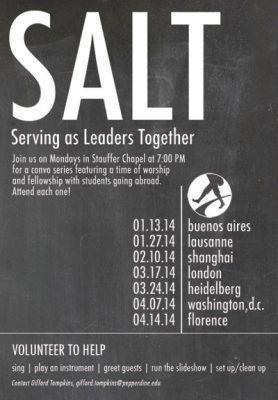 White stickers depicting the Swiss flag adorn students’ outerwear while excited chatter fills the air as they discuss their impending trip to Lausanne, Switzerland next fall.

At Pepperdine University, students get to participate in a seven part convocation series offered on Monday nights in Stauffer Chapel. SALT, or Students And Leaders Together, is a series designed to prepare students spiritually for their time overseas in the various international programs offered. Although not restricted to students going abroad, speakers at the SALT event target the various programs and offer advice specific to the country being featured, according to the university’s website.

This past Monday the SALT convocation met at 7 p.m. in the chapel and focused on the trip to Lausanne next year. Senior Gifford Tompkins, organizer and leader of SALT, introduced the program, and professor Michael Murrie, who will be the visiting faculty for the program next year, led the group in prayer. A student-led worship band comprised of those going to Lausanne performed before and after the speakers.

The feature speakers of the night, Cecily Breeding, a Pepperdine Alumni and member of the Housing and Residential Life staff and her husband Dusty, also an Alumni, have spent time travelling abroad and gave advice to the gathered student travelers. The theme of their talk was to “choose wisely and say yes,” and they left a wonderful overall impression, according to freshman Tara Zwart.

“Their theme really inspired me to be adventurous next year,” Zwart said, as she plans to attend the Lausanne program in the fall. Student Allie Berry, who will be attending the program in Buenos Aires next year, also found the speakers encouraging.

“Even though we didn’t talk about Buenos Aires specifically, it made me excited to choose wisely the things that I’ll do while there and make sure to visit places that aren’t just the touristy spots,” Berry said. “I left feeling more excited for my trip and renewed because it was a Monday and the worship provided a new hoorah into my week.” Although the event was not centered on her specific trip, Berry said she found the speakers relatable and felt she could apply the lessons she learned to her own program.

Freshman Peter Reim, who is also attending the Lausanne program, participated in the worship band, playing the cajón. In regards to playing in the band, he said “it’s cool to be able to express worship in a different way, and, for me, it’s making the beats.” He also found the speakers incredibly moving and said as a result of SALT, he learned that “when we start to love God, we start to say yes to the right things because he loves them too.”

Focusing on this theme, the Breedings encouraged the students to get a direction before they go abroad so that they can establish where they would like to be spiritually one year from now.

“If I already don’t have enough time to plan, I certainly won’t while I’m over there. I definitely learned that I’ll have to make the effort to think through these things before I leave,” Zwart said.

Additionally, Reim said the Breedings’ talk helped him realize the need to grow spiritually and prepare in advance for the challenges he will face abroad.

Tompkins gave insight into the goals and aspirations of the program.

“The goal is multifaceted. Mostly it’s to give students a chance to consider and think about what life will be like abroad. It’s to lessen the shock of being abroad,” Tompkins said. Tompkins currently serves as the SALT intern and is in charge of organizing, scheduling and preparing speakers for the events. As part of his role, Tompkins selects speakers for the event who have a connection to the Pepperdine study abroad program in some way. Attending the Buenos Aires trip himself as a junior, he said when students are abroad they realize their independence and have to decide if their faith still exists, and if it does, what it looks like. According to Tompkins, the point of SALT is “trying to get that thought to germinate and hear some wisdom from those who have travelled abroad.”

The next SALT convocation will be held on February 11th and will focus on the Shanghai abroad program.