“We are hard-pressed on every side, yet not crushed; we are perplexed, but not in despair; persecuted, but not forsaken; struck down, but not destroyed.” 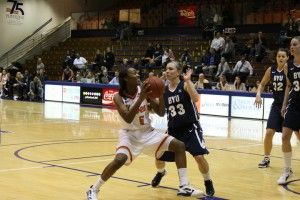 The quote comes from the Bible, 2 Corinthians 4:8-9. At first glance, it may appear to be verses that Denver Broncos quarterback Tim Tebow would have written on his black  eye black  when he played University of Florida.
Tebow continues to captivate America with his miraculous plays and public display of faith, but — while Tebow may have cited these verses at some point — it was actually women’s basketball head coach Julie Rousseau who discussed the passage with her team.

Prior to the tip-off of the women’s basketball game against powerhouse BYU (21-4, 9-2) on Feb. 2, the team gathered in the locker room to listen to eighth-year coach Rousseau’s pre-game speech.

“She gave us a reading in 2 Corinthians and that applied to what our team has been going through and how we can apply it not only to the game, but also to our lives,” senior forward Skye Barnett said.

The Waves 12-10 this season  and 7-4 within the conference ended up overcoming great odds and winning that game by a convincing 61-49 margin.

“There are lots of lessons that can be learned from the Bible, such as how to not give up,” said Rousseau, former WNBA coach. “The BYU game was a huge example of that.”

When the two teams met on Jan. 12, the Cougars dominated, taking over the game and running away with an easy 80-56 victory. This time around, the Waves locked down on defense and experienced their own Tebow-time type of win.

However, the squad didn’t wait until the fourth quarter to seal the victory, but instead snatched it away in the second half to cruise to the finish.

Rousseau’s BYU pre-game speech was no anomaly, as she has been openly sharing her faith with her players for years.

“When these girls [on the team] got here, they knew what they were getting in to,” Rousseau said. “They know me. It’s no surprise that I’m always referring to God’s word.”

Rousseau leads by example, saying that she purposefully uses coaching as a means of ministering to her players.
“She encourages us to attend church every Sunday,” junior guard Shay Cooney-Williams said. “We pray before every game and she also emails us scriptures. We bring up faith in a lot of situations during our team meetings as well.”

While Rousseau also mentioned that she tries not to be “from the Bible all the time,” her intentions branch beyond that of an influential sports mentor, and even beyond an influential faith mentor.

“Sports is a microcosm of life,” Rousseau said. “I want these young women to walk away from this program with more than just knowledge about sports.”

However, Rousseau is not the only person part of the women’s basketball program that stands firm in her faith. One of her senior players, Barnett, also seamlessly combines her passions of faith and basketball, according to teammate Cooney-Williams.

“Skye really shows her faith in basketball,” Cooney-Williams said. “She writes scriptures on her arms for game days. She also leads prayer before every game. She is pretty strong in her faith, and has no problems showing it on the court and in the locker room.”

Barnett responded to why she acts in the way that she does: “I do lead the team in prayer and I do it because God wants me to,” Barnett said. “And also because of the fact that I love to pray. It is something that gives me so much joy. I am honored to do it for the team, and I am so thankful that they let me pray for them.”

Averaging seven points and five rebounds on the season, Barnett plays for more than solely her stats. Her attitude mirrors how Rousseau sees a bigger picture as she coaches the team.

“When I am out there on the court, I am just playing for God,” Barnett said. “It is so easy and fun to do, because I know that the creator of the universe has my back, and that no matter how good or bad I play, or if we win or lose, his love for me will never change.”

In an effort to improve efficiency, Sodexo recently implemented a new ticket ordering system in the Waves Cafe. As Sodexo...
Copyright 2013 Jupiter Premium Magazine Theme
Back to top