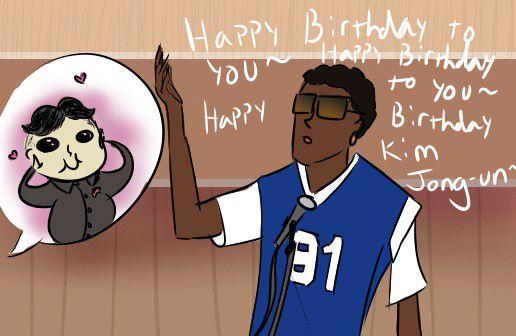 Doug Christie is one the most notable Waves to grace the hardwood, playing three incredible seasons of basketball at Pepperdine from 1990 to 1992, leading the Waves to two NCAA tournament appearances and being named the WCC player of the year twice. Christie scored 1,392 career points and recorded 395 assists to lead the school in scoring, assists and steals during his time as a Wave, and would go on to be the 17th overall pick in the 1992 NBA draft. Christie went on to have a respectable 15-year career as a pro, where he was known to be a shut-down defender and a formidable 3-point shooter.

Unfortunately, the former Wave has been making headlines recently for playing the game for what many believe are the wrong reasons. According to ESPN, Christie joined fellow retired NBA stars in an exhibition match in Pyongyang, North Korea, on Jan. 8 in an attempt to foster “basketball diplomacy” between the United States and the secretive nation that has a less-than-reputable human rights’ track record on the world stage. Many media outlets have been quick to chastise Christie and his peers for reportedly paying homage to a country with whom the United States has had a long history of tension with, and regardless of whether their trip was wholly altruistic or not, it seems that damage has been done.

The exhibition match was the brainchild of former NBA star Dennis Rodman, whose mission for basketball diplomacy seemed to be trying to spread a message of unification, looking to use the popular sport to coordinate two cultures in sportsmanship and camaraderie. However, the poor execution of his plan seemed to muddy the underlying moral principles behind his grand endeavor, and has resulted in more negativity than good.

Rodman made history last year when he became the highest profile person from the U.S. in recent years to visit North Korea. “His trip came during a time of heightened tensions between North Korea and the United States, due in large part to nuclear testings by North Korea and the threat of attack against the U.S. and South Korea. These threats were due in large part to sanctions placed upon North Korea by the United Nations for its continued nuclear armament and large scale human rights violations,” as reported by ABC News in February.

According to MSNBC, Rodman was questioned upon his return in early March of 2013” about the fate of Kenneth Bae, a Korean-American missionary who has been imprisoned in North Korea since 2012 and is serving a 15-year sentence of hard labor for state subversion while leading a Christian tour group in the country. At the time, Rodman professed that he would make every attempt to convince North Korean leader Kim Jong-un to free Bae, going so far as to hit Twitter with the following message on May 7: “I’m calling on the Supreme Leader of North Korea or as I call him ‘Kim’, to do me a solid and cut Kenneth Bae loose.”

Rodman has made a handful of additional visits to North Korea since then, and it seems the call to free Bae has been replaced with more light-hearted glib; enigmatic Rodman reverted to a new nickname for the North Korean leader, affectionately known as “The Marshall,” and outlined his plans for basketball diplomacy” which came to fruition last week for better or worse.” Rodman, along with Christie and former NBA stars Kenny Anderson, Cliff Robinson, Vin Baker, Eric Floyd and Charles Smith played an exhibition game against a top-ranked North Korean team in front of Kim Jong-un on Jan. 8, reportedly the North Korean leader’s birthday, according to ESPN. The game was commenced with a rendition of “Happy Birthday” sung by none other than Rodman himself.

The friendly game was played just weeks after Kim Jong-un notoriously had his uncle, once considered his mentor, executed for a litany of alleged crimes against the state. The game was played in front of a crowd of about 14,000 at the Pyongyang Indoor Stadium, according to ESPN. The American team played together in the first half against the North Koreans, being outscored 47 to 39 points before mixing up the teams in the second half. Rodman sat out the second half and was seen seated next to Kim Jong-un for the remainder of the game.

The media was already abuzz due to what many deemed an ill-advised game, but came to a head during a televised interview with CNN correspondent Chris Cuomo in which Rodman became emotional and erratic. After being continually pressed by Cuomo for why Rodman had not used his considerable influence and friendship with Kim Jong-un to help free Kenneth Bae, Rodman momentarily seemed to imply that Bae was deserving of his punishment, angrily lashing out at Cuomo and stating that “Kenneth Bae did one thing … if you understand what Kenneth Bae did, do you understand what he did in this country?” before going on an impassioned rant highlighting the sacrifice and scrutiny he and his fellow players have endured for trying to bridge the gap between the U.S. and North Korea. “One day, this door is going to open,” Rodman said, “because of these 10 guys here. All of us … everybody here. We could open the door just a little bit for people to come here and do one thing.”

If his heart was indeed in the right place, Rodman seemed to overshadow it with further escapades following the game. Rodman first publicly apologized about his insensitivity toward Bae and blamed his actions during the CNN interview partially on the fact that he had been drinking. Coupled with the fact that he and several players went on a ski trip at the multimillion-dollar Masik Pass ski resort in North Korea (built with state funds in a notably impoverished country) the day following the game as reported by USA Today. Rumors from multiple media outlets said that the American players were paid for their involvement in the match have drawn attention away from what seemed to be a well-meaning endeavor. Continued media scrutiny and public condemnation by the U.S. state department and the NBA have made Rodman’s attempt at basketball diplomacy seem more like a basketball farce.

“Many of Rodman’s fellow peers have since expressed regrets over their trip to North Korea. Doug Christie broke his silence recently to TMZ Sports, stating “I’d like to apologize to my family and friends and all my fellow Americans if what I did was un-American or unpatriotic.” The North Korean exhibition game looks to go down as an unwanted stain on Christie’s otherwise respectable basketball career, but if it was able to open the minds of a few and lessen the divide between Washington and Pyongyang, than maybe basketball diplomacy isn’t such a bad thing.

“Dennis Rodman’s investment is weird in North Korea since there are poor relations with the U.S. It is surprising that this is happening but not something to get worked up about.” – Nick Blanchard, Freshman

“Throughout history, we’ve seen lots of opportunity for sports diplomacy. For North Korea to allow Dennis Rodman is at least a step in the right direction to better relationships. Will Rodman solve all the issues? No. But a step in the right direction to overcome tense relationships through common interest of sports can later help solve the human rights violations in North Korea.” – Chris Hostetler, Sophomore