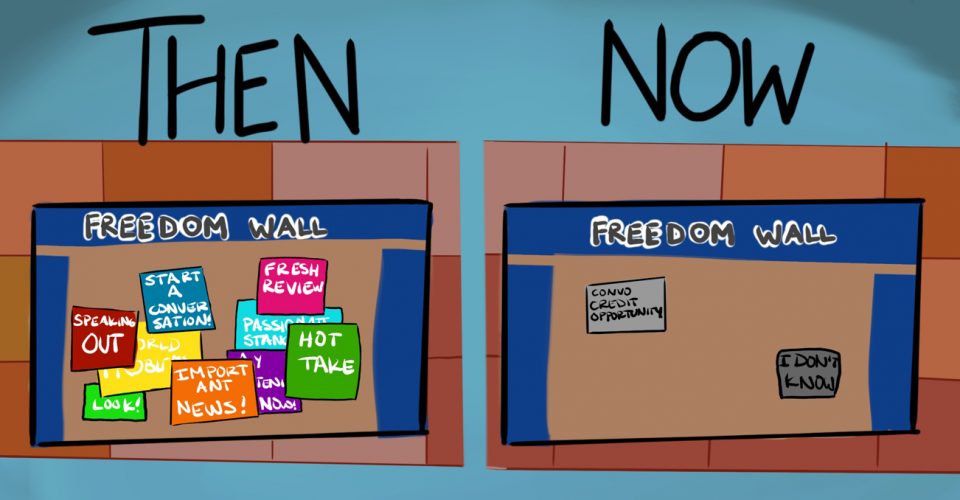 Pepperdine’s Freedom Wall is consistently abused by students who frequently vandalize other students’ posts and use it to place advertisements.

It does seem quaint that, in the digital age, we should look to paper and cork-board as a meaningful avenue for dialogue. As freer and more convenient forums for discussion become available, the Freedom Wall may become obsolete or outdated in the eyes of students. Even so, it has the potential to stimulate open conversation in ways that no other Pepperdine forum can. Students ought to use it responsibly for its designated purpose.

The Freedom Wall presents an opportunity that relatively few students take advantage of: a place for direct and thoughtful engagement with broad and timely issues. In past semesters, it has hosted lively discussions of political and theological importance, like immigration, civil rights and Pepperdine policies. Students should continue discussions like these to bolster the intellectual climate of the campus.

Users of the Freedom Wall are uniquely vulnerable to censorship in ways that members of other forums aren’t. Just as students can post and write what they wish without attaching their names, so can students anonymously remove posts without leaving a trace. The Pepperdine Student Handbook states that “when posting an item, students are encouraged to sign and date it,” though many posters forego this suggestion.

Inflammatory or controversial posts are often vandalized or removed anonymously with no repercussions. Last year, posters from the conservative organization Turning Point USA were “handwritten on after they were posted” and “removed from the Freedom Wall,” according to Rachal Marquez’s “From Our Feed: Posters Removed from Freedom Wall,” published by the Graphic on Jan. 14, 2017.

Countless other acts of vandalism go unreported and unnoticed. It is impossible to know exactly who removes which posts, and so it is difficult to estimate the extent of student vandalism.

The integrity of the Freedom Wall is also jeopardized by students who use it to post advertisements. The Student Handbook makes clear that the wall “may not be used by organizations for advertising.”

Students have ignored this policy for years. Advertorial fliers and posts made up the bulk of material on the wall in 2012, according to Benjamin Kryder’s op-ed “Give us, us, The Freedom Wall,” published by the Graphic on Feb. 22, 2012. Though Kryder remembered “when the Freedom Wall was a genuine resource for the discussion of human rights, theological doctrines, environmental issues, and questions of liberty,” it had degenerated into “a big, ugly tangible Facebook event wall.”

Whether or not The Freedom Wall is a successful and relevant forum for open discussion will be decided by students and their treatment of it. It may be that better and freer alternatives will be favored: After all, the Freedom Wall is not without its flaws. But insofar as it functions as a bastion of free speech on campus, it should be respected and used properly by all students. 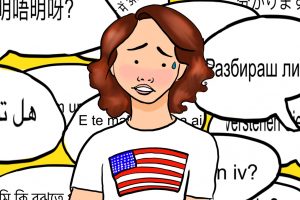 Art by Madeline DuvallSpeaking multiple languages is an important skill that many people worldwide possess, yet is an area...
Copyright 2013 Jupiter Premium Magazine Theme
Back to top