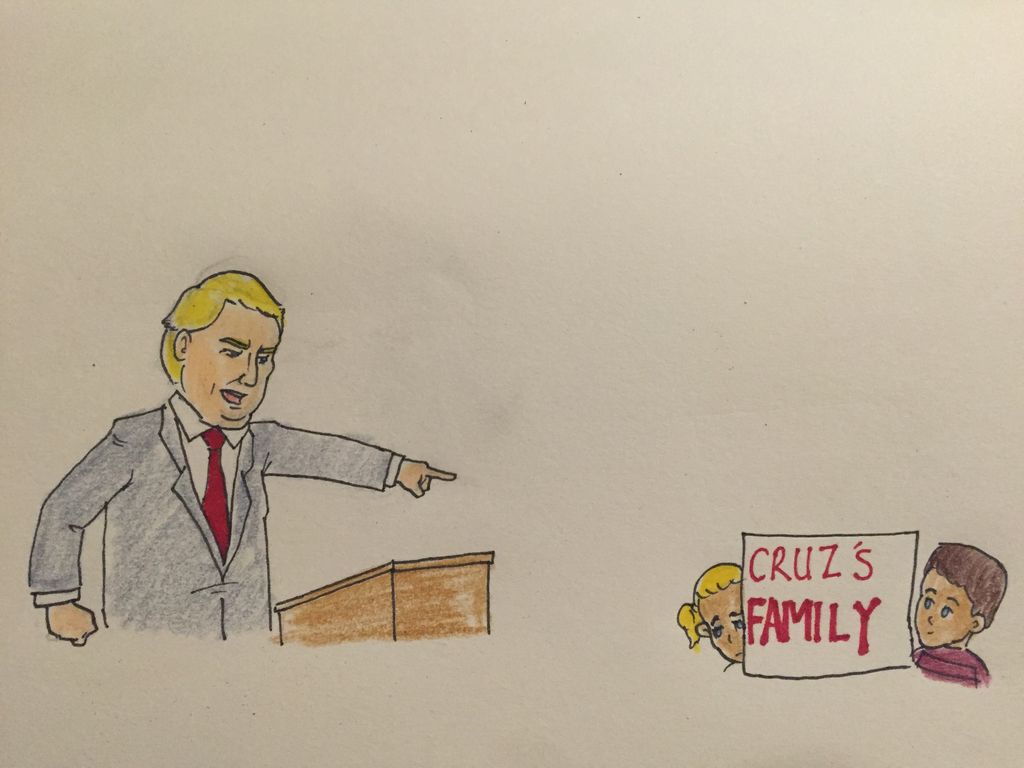 What do all of these facts have in common? Absolutely none of them have any bearing on the policies or politics of these politicians. In fact, a lot of family issues don’t. So then why is it that politicians’ family members have been, especially in recent years, dragged through the mud?

The most recent case of this, of course, is the matter between Sen. Ted Cruz (R—TX) and Donald Trump. The problem first began when an anti-Trump group started running Facebook ads in order to pull the Mormon vote, according to the BuzzFeed article “Anti-Trump Group Runs Facebook Ads Seeking to Rally Mormon Voters” published March 21, 2016 by McKay Coppins. These ads included one of Melania Trump lying seductively on fur with the caption, “Meet Melania Trump your next first lady. Or, you could support Ted Cruz on Tuesday.”

In response, Donald Trump countered with a tweet saying “Lyin’ Ted Cruz just used a picture of Melania from a G.Q. shoot in his ad. Be careful, Lyin’ Ted, or I will spill the beans on your wife!” along with a couple other tweets, and a side-by-side photo comparison of their wives. This move has angered some of Trump’s ardent supporters and critics alike.

This isn’t the first time that family has been brought into a presidential race. It happened in 2008 when former Governor and GOP Vice Presidential Nominee Sarah Palin’s daughter Bristol was criticized for being a teen mom, and it happened earlier on in this presidential race, when Ben Carson’s wife was pitted against first lady Michelle Obama.

Now, the fact of the matter is, it’s fine not to like certain candidates; it’s also fine to have problems with their family members. The problem arises when these feelings are brought into the political sphere. It becomes a problem when discussions on policies become replaced with ad hominem attacks. The problem arises when debates on foreign policy are replaced with arguments over whose wife is prettier.

The thing is, unless a politician’s policies on national security are tattooed over his or her spouse’s face, there is no reason for their photos to be dragged through the mud and placed on every news outlet over and over again. Unless their wives or husbands are having their own debate on their spouses’ policies regarding Iran’s nuclear plans, there’s no reason for these women and men to be pitted against each other.

Imagine if SGA elections ran the same way that politics have been run in recent years. If one of the candidates decided to spend time tweeting about how another candidate’s significant other was ugly or unlovable, voters would label that move as immature and cruel, and there would be immediate backlash. So why then are politicians and the media not held to the same standard?

This election season has been so dragged out and so made fun of that at times it’s difficult to remember that whoever wins this election will be the leader of a large portion of the free world. Whoever wins this election will determine the direction of this country for the next four years. So it’s fine not to like Bill Clinton because of the Lewinsky scandal, or not to like that Melania Trump used to be a model. But they’re not the ones currently running, and their pasts won’t determine the policies of the future president; so it’s about time we stopped bringing them up as if they did.