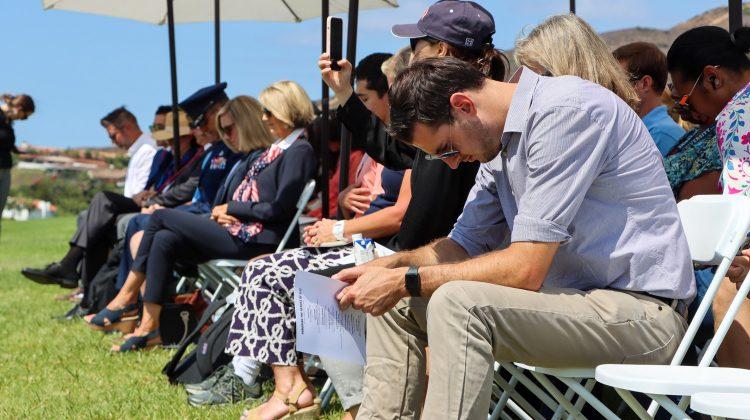 Attendees take a moment to pause during the service during Honoring the Heroes of 9/11 on Sept. 12. The event took place on Alumni Park, and consisted of various speakers, prayer and refreshments. Photos by Sammie Wuensche

On a cloudless Sept. 12, in Malibu, Pepperdine faculty, honored guests and students gathered in front of a display of flags to commemorate the 2,977 lives lost on 9/11.

Each flag represents a life lost on 9/11 and correlates to the home countries of those who died. President Jim Gash, Chancellor Sara Jackson, Eric Leshinsky, director of Student Affairs, and the two students who started the flag display in 2008 spoke — alumni Chris Garcia (’11) and founder Ryan Sawtelle (’09).

“It’s an important opportunity for our community and for our country to remember the losses that we suffered on that day and to remember that we can’t take freedom for granted,” Gash said.

Three days before the memorial service, there was a different scene on Alumni Park — under rain that came down in streams. Pepperdine students, faculty and alumni set up the display in the annual Waves of Flags event.

As the group planted flags, cars whizzed past, honking their horns to showcase appreciation.

“The beeps, I love the beeps,” Sawtelle said.

Though the idea of a flag display for 9/11 was not new, Sawtelle said he was the one who brought it to Pepperdine 14 years ago, with the help of Garcia.

“It felt like as years went on, people became more complacent with not feeling as prideful and as together as one family per se than we did after 9/11,” Sawtelle said. “And I thought if we could make a display that was going to bring that feeling back, that would be best.”

Sawtelle said he pitched the event in 2006 to former President Andrew K. Benton, and it took 18 months to fundraise and prepare. After the first year of the event Sawtelle graduated but gave the materials, such as flags, to Pepperdine, with the hope the school would continue the tradition.

The memory of 9/11 is ingrained for everyone who witnessed it, Sawtelle said.

“I just spoke to an individual, she graduated in ’93, she was there,” Sawtelle said. “She lives here but she was in Manhattan when it happened, and it’s the first time she’s come to volunteer. She put one flag and she was just bawling her eyes out and she couldn’t do it, just put up that one flag.”

Every year, Sawtelle said he remembers how difficult it was to set up the first Waves of Flags display at Pepperdine.

“I’m just happy that it’s continuing,” Sawtelle said. “I mean ultimately, I see these go up, I see all these guys out here putting them up and again, they weren’t even born. They don’t know what 9/11 was. I’m hoping they understand the significance of what they’re doing.”

Senior Majok Deng said despite the Men’s Basketball Team being too young to remember 9/11, they chose to participate in set-up for Waves of Flags because it’s a way to remember the legacy of those that passed on 9/11.

“I don’t think it’s necessarily a time to be sad,” Deng said. “I feel like it’s more of a time to celebrate and still hold their life with value with a lot of power behind it, and putting up these flags, it’s a way of doing that.”

In the face of the rain, Deng said everyone remained for set-up.

“It’s more than just us, and it’s more than the raindrops hitting us.” Deng said. “This will pass and, if roles were reversed, I’m sure they would want to do this.”

Deng immigrated from South Sudan as a refugee in 2011, and became a U.S. citizen. Deng said he learned more about 9/11 during his time at Pepperdine.

“There’s a lot more to learn than just 9/11 happened,” Deng said. “Especially the people that put on [Waves of Flags]. They have a lot more to say, and I think hearing from them personally, would give you a little bit more of understanding of why these flags stand here.”

The Waves of Flags set-up gave him and others a chance to reflect on 9/11 and those lost, Deng said.

Letting Them Know How Much They’re Loved

Jennifer Sanchez, who works for investment management for Pepperdine, said she chose to serve at Waves of Flags set-up because of her connection to 9/11.

“A cousin who I’m very close to was in the middle of it all and actually missed being in the World Trade Center because he had a meeting off-site right next door,” Sanchez said. “I was terrified. And it’s very near and dear to my heart.”

Sanchez said she talks with her military-connected friends and family, and her cousin Mike, who was in New York City during 9/11, about the Waves of Flags event.

“We talked about it and what he has dealt with after seeing what he experienced,” Sanchez said. “It’s, it’s horrifying, and to this day, it still affects him and it’s just my way of letting him know how much he’s loved, and all the people that experienced it or lost their lives.”

Alumnus John Bossler (’80) said he comes to the Waves of Flags event for the past six or seven years. The event is important, not just for the Pepperdine community, but for the thousands of people that drive past the display, he said.

Bossler said he was in the first tower when it was hit on 9/11.

“I get involved with this each year it helps me from a selfish point of view, it helps me to deal with this time,” Bossler said. “But I believe it also gives an opportunity for others. I know others that drive their families here and it’s a teachable moment for them and their children.”

Seaver alumna Kathy Diehl (’80) said she has attended set-up at Waves of Flags for six years, and her sister Kelly Scheideman joined her this year.

“I had seen the display a few years and I didn’t know that it was the kind of thing that we could participate in,” Diehl said. “And it’s just so moving and so meaningful. That when they open it up to alumni, I wanted to be part of it to contribute.”

Putting the flags in the ground, Diehl said, is overwhelming.

“We were just saying we don’t know personally, anyone that died there,” Scheideman said. “But just the reaction of the country, you felt like we were unified and it’s sad to me how not unified we are now and so I was encouraged by what [a speaker at the event] said, maybe we can relate to one another and maybe this would help and people see this.”

Cadet Second Lieutenant Nicholas Patello said it is a yearly tradition for his National Guard unit to meet at Pepperdine for Waves of Flags.

“Every year it’s one year away from 9/11,” Patello said. “That’s another year that people can forget about what happened, it’s another year of forgetting those who passed away on that day that was very tragic.”

Patello said 9/11 is a time for people to put away differences and come together as a country.

“If there was one person planting a flag could take forever, but there’s hundreds of us here,” Patello said. “An African proverb I can think of is ‘If you go alone, you’ll go fast. If you run together, you’ll go far’ And I think that really resonates here today.”

Waves of Flags, Patello said, is a way of reminding himself that those he lost are still here in spirit.

“They’re not forgotten, and we wont, we wont,” Patello said. “Every year when we come here we remember all 2,977, I don’t think we’ll ever forget.”