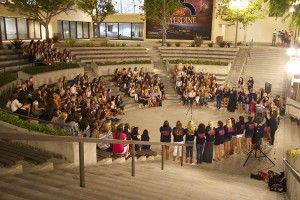 “This year was actually the first year that Pepperdine reached and surpassed the national average of the amount of girls who rushed and ended up with a bid,” said Kelsey Allie Rosenlieb, vice president of Social Outreach for               Panhellenic.

Pepperdine has seven National Panhellenic organizations on campus, each of which participates in Recruitment. This year, due to a higher number of women who went through Recruitment, every sorority was able to take a historically large pledge class.

“With pledge class numbers ranging from 23 to 30, the year was a huge success for every group,” Rosenlieb said.

She explained that this year’s success can be partially attributed to the size of the freshman class, but also to the Panhellenic Council’s new leadership.

“It is so easy to work with her,” Rosenlieb said. “Not only is she organized, but she really brings a fresh set of eyes to Panhellenic.”

Under this new direction, one of the biggest priorities of Panhellenic this year has been to advertise the positive aspects of Greek life around campus. The council and Greek groups began advertising in August.

“We placed posters around campus, passed out flyers at Convo, used digital signage, painted the Rock and posted information on Facebook,” Rosenlieb said.

Freshmen Elena Sullivan and Morgan Beck both rushed as a result. “I feel that all Greek life here at Pepperdine is thought of in a positive light,” Beck said.

The women received their bids during the Bid Day ceremony and were welcomed into their  new sororities.

“Bid night is a fun night of celebration for everyone who has put so much work into Recruitment, on both sides of the process,” Rosenlieb said.

After considering the success of innovators, I cut out time to whip up my own visions for the future. As the ice melted in my glass...
Copyright 2013 Jupiter Premium Magazine Theme
Back to top