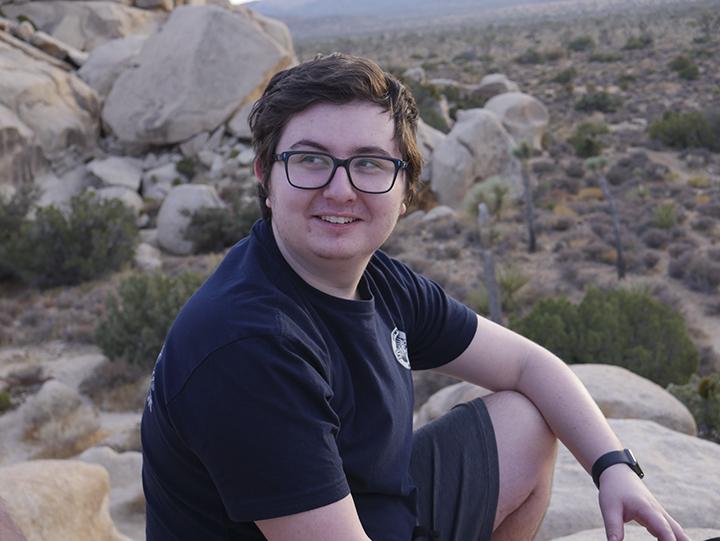 Senior Screen Arts major Austin Cadman enjoys a trip to Joshua Tree National Park near Twentynine Palms, Calif., in October to take a break from online classes. Cadman said he plans to stay in Los Angeles after graduating and looks to work in the entertainment industry. Photo courtesy of Austin Cadman

While COVID-19 has derailed many plans, no profession has been hit quite as hard as the entertainment industry. With the world shut down and graduation looming, Screen Arts major Austin Cadman said he has an exciting yet frightening future ahead of him.

After transferring to Pepperdine in January 2019, Cadman has made lifelong friendships and memories. He sat down with the Graphic to share how his experience helped him realize his passion for Screen Arts and what his plans are for the future.

What are your plans for after graduation?

Austin Cadman: Oh, that’s a loaded question right now. I plan to stay here in LA, possibly looking at New York, but that’s really the only rock-solid plan. I want to go into entertainment and I want to tell stories. Hopefully, when theaters open back up, [I can] get a bunch of people in a theater, show them some cool movies, and get paid to do that.

What about those plans are you the most nervous or excited about?

AC: I’m nervous about [the future] because you really have no idea. Are movies going to go back into production this year? Are people going to go back to theaters? Part of our senior experience, the Screen Arts students, is to do a capstone film. We get to do one big movie that kind of encapsulates everything that we’ve learned during our time here. Will we even be able to do that safely? I’m nervous because who knows what’s gonna happen.

Out of your five semesters at Pepperdine, what has been your favorite memory?

AC: That one’s easy, my favorite memory was before everything shut down last year, at the end of January, they had the ReelStories Film Festival on campus. Basically, a night where all the Screen Arts kids get to come out and show the projects that they’ve made. They have a red carpet, everyone dresses up, you take pictures, hang out with your friends and watch all the movies. I submitted one, it got in, and we got to watch a movie I made on a big screen in front of a huge audience. I don’t think that’s something I’ll ever forget.

If you could give any advice to those just starting at Pepperdine, what would it be?

AC: I would say hang in there. Get the GE’s done while everything’s online and hold on to your art classes. You really want to be in-person, because that is really, really valuable. You know, for every creative person out there, there are so many stories coming out of all this, and it’s important to be able to tell them and to have a platform and a voice to tell them with. So hold on to those stories. Tell them. They’re so important.