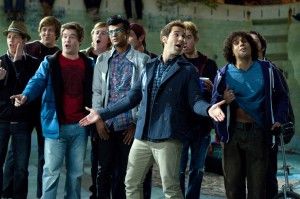 A film with two rival a cappella groups, pop music and a mix of offbeat characters sounds like the “Glee” trend is still continuing. However, that’s not entirely the case with the latest comedy-musical “Pitch Perfect.”

“Pitch Perfect” is a funny, upbeat film that delves into the competitive and highly dramatic world of college a cappella groups. The film combines witty humor, popular music and fresh characters to create a purely comical movie that keeps audiences laughing from start to finish.

The storyline is fairly typical for a teen comedy. Beca, played by Anna Kendrick, is forced to attend Barton College where her father is a professor, although her real dream is to become a disc jockey in LA.  Almost immediately, Beca doesn’t feel like she belongs at Barton and spends most of her time remixing music in her room. However, one day while working at the college’s radio station, she meets Jesse, played by Skylar Astin, and begins a friendship-romance with him. But as it turns out, Jesse is a member of the “Treble-makers,” Barton’s leading male a cappella group and rival to the all-female “Barton Bellas.”

Beca eventually finds herself part of the “Barton Bellas” a cappella group who are trying to reshape their image after a disastrous performance mishap at the finals the previous year.

The new group of Barton Bellas consists of returning captains, the controlling Aubrey (Anna Camp), the confident Chloe (Brittney Snow) and a group of new misfits that include a lesbian student with a gambling problem (Ester Dean), the “bombshell” (Alexis Knapp), the quiet but darkly humorous Asian (Hana Mae Lee), Fat Amy (Rebel Wilson), an outspoken, wildly funny Tasmanian transfer student who is responsible for delivering most of the movie’s successful one-liners and of course Beca, the aspiring DJ and the punk rock savior of the group.

The movie then follows the new group of Barton Bellas as they struggle to come to terms with their new identity and triumph over the Treble Makers at the national a cappella finals.

Although the competition is fierce, it is during this journey to nationals that the movie contains the bulk of its humor with musical improv standoffs between the Bellas and the Treble Makers, an awkward budding romance between Bella and Jesse and an almost fatal bus trip in which Fat Amy gets shot — well, with a burrito — and the girls are forced to share a bus with their rivals.

However, it is the one-liners and the witty, sometimes wildly inappropriate, comments mostly delivered by Fat Amy that really make the movie a purely comedic and enjoyable experience for the audience.

This witty humor used throughout the movie teaches the audience that the Bellas are “aca-people” who get deeply involved with “aca-politics” and punish rule breakers by “pitch-slapping” them.

And of course, the upbeat pop music and dance numbers featured in the movie help give it an energetic and fast-paced feeling.

As the Bellas try to shed their uptight classic repertoire, they begin to explore their love for modern pop songs like “Titanium” by David Guetta and “You Spin Me Round (Like a Record)” by Dead or Alive. They also do a hilarious rendition of “Mickey” by Toni Basil in a sing-off with the Tremble Makers.

This integration of popular music really gets the audience charged and adds a little extra force to the humor of the movie.

However, this movie is purely comical. It features a stereotypical teen romance with no added depth. The characters don’t really struggle to overcome any serious questions of identity or explore the drive for competition that one might expect to be slightly integrated into the movie.

Despite this, the other comedic elements of “Pitch Perfect” keep the movie going at a fast enough pace that the audience stays entertained the whole time without feeling like they missed out on something.

Because of Communication graduate student Stephen Dickter, his peer Lauren Anderson gathered the courage to walk again. Because...
Copyright 2013 Jupiter Premium Magazine Theme
Back to top