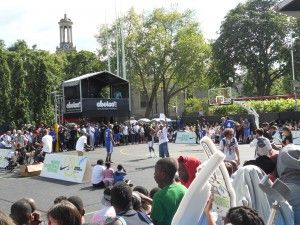 LONDON, ENGLAND— To say basketball “isn’t a big deal” in London is an understatement. A few weeks ago, my friend and I went on a mission to find a court to play on. The nearest one was indoors, but charged a hefty $67 fee per hour. The nearest free one? —A 30-minute Tube ride away. We arrived to four baskets. Only one hoop had a net—well, half a net hanging off.

Two local kids were shooting around, so we played a few pick-up games with them. They informed us that this court, in Clapham Park, was “the best outdoor basketball court in London.” The court surface looked new, complete with NBA cares and Adidas logos, but there were no nets on the double-thick rims.

The experience left us slightly disheartened, which is why it surprised me when I found out that Nike was hosting a World Basketball Event in Brixton in Greater London on June 30.

Plus, the fact that Chicago Bulls All Star Luol Deng, and former Chicago Bulls player and legendary hall of famer Scottie Pippen attended the event puzzled me as well. Though Deng has his reasons to be there: he grew up in Brixton, he plays for the Great Britain Olympic basketball team and he is the first player hailing from Britain to play for the Bulls.

On the other hand, Pippen’s only connection was that he played for the same NBA team as Deng—a bit of a stretch. However, I’m not complaining.

Pippen and Deng graced the dunk competition as judges during the day, and showed up for interviews in the middle of the nighttime showcase/concert. Both of them flashed tons of smiles, and gave some great advice to the young basketball players in Britain: “always believe in yourself.”

Later into the night, Big Boi from Outkast highlighted the concert with a memorable energetic performance.

Other great acts at the showcase/concert included a UK hip-hop dance squad, the Miami Heat street band, and performances by upcoming UK artists Dot Rotten and Angel. The stage was impressively equipped with a basketball court in which a dunk show was also held—the highest fliers I’ve ever seen. 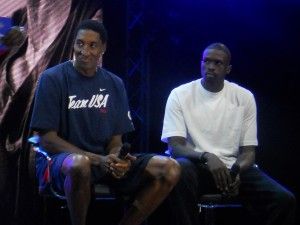 Overall, Nike claimed the night concert as a success with a packed house at the O2 Academy Brixton. They kindly only charged five pounds per person (equivalent to about $8).

The free daytime festivities drew equal excitement as well as showing off some flair. Nike took an area in the middle of Brixton, Windrush Square, and added a full basketball court, bleachers, two half courts, a Nike+ technology trial center and a variety of booths.

The main attraction was the full court happenings—it took hours in line just to get a seat, but it was well worth it.

A 3-on-3 tournament attracted the best players from all over Britain, and a dunk contest amped up the crowd. 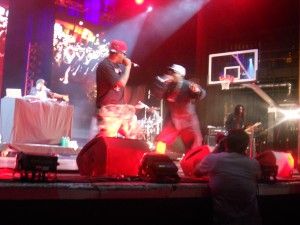 Although, the smaller crowd didn’t hurt me, since it allowed me to snag a front row view of Pippen, Deng and Big Boi.

The basketball festival may have sparked London’s interest in the sport for only a day or perhaps for the week, but as long as Deng succeeds in the NBA, you can bet London will keep at least one eye on the Bulls. And the kids will continue to sport those Chicago Bulls snapbacks.