Pepperdine’s Fundraising Holds Up to Other Universities’ 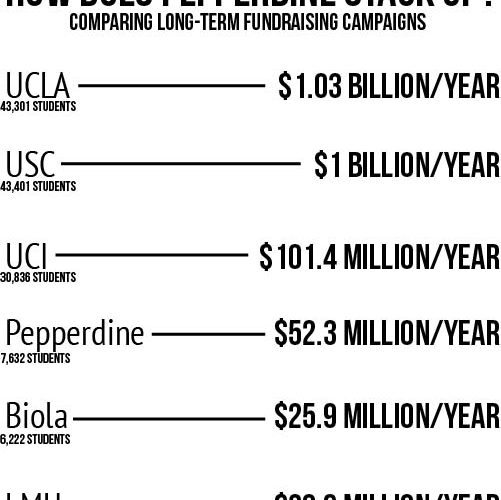 These types of campaigns, which can span several years, raise money for various university needs, including need-based scholarships, fellowships and for helping specific schools within the universities. Donations for these fundraisers can range anywhere from $5 to much larger sums of money, in the thousands or millions.

Angela Kappus, Seaver class giving officer and 2014 alumna, said she specifically works to increase the alumni giving rate as a way to increase Pepperdine’s ranking in the U.S. News & World Report, as it counts as 5 percent of the algorithm used to calculate rankings.

“We like to say, ‘donors over dollars,'” Kappus said. “We need those large amounts to keep our school afloat because we are a private school and we rely on donations. But overall, the day-to-day, we’re very thankful just for the continuation, all the little gifts because those are the ones that add up.”

Senior Allie Berry, president of the Pepperdine Student Philanthropy Council, works to encourage student donations so that it becomes an intrinsic action throughout their life.

“We’re not in charge of hiring people, so it’s something tangible that we can do to make our rankings be more, which makes our degrees be worth more,” Berry said.

Since seniors count as alumni in this algorithm, Kappus said her goal is to work on encouraging student donations.

“You’re only a student for four years, or how however many years it takes for you to graduate, and then but you’re an alum and you’re a Wave for life,” Kappus said. “All of these other schools that have very high rankings for alumni giving, it’s engrained in them from the beginning and so we’re even trying just to get from that freshman experience on.”

Comparing Pepperdine to Other Private Universities

In Pepperdine’s roughly nine-year fundraiser, the Campaign for Pepperdine, the university raised $470,849,319. In the recent Give2Pepp campaign, a 37-hour event, Pepperdine raised more than $562,049 for various schools and other areas of the university, according to the Give2Pepp website.

Other private schools, both big and small, have similar fundraising projects.

Over a span of six years, USC has raised $6 billion for their Campaign for USC, according to the campaign’s website. The university raised $667 million in cash and over $1 billion overall in 2016, the USC News website states. This past year, USC was ranked third for top donations, behind Harvard University and Stanford University, ranked first and second respectively, according to a Statista report.

Biola University had a five-year fundraiser, A Soul of Conviction, A Voice of Courage: The Campaign for Biola University, that began in 2012, surpassing its $180 million goal and raising $214,184,605, according to a Biola News article.

In comparison, Loyola Marymount University has not had that large of a fundraiser, but beat its $100 million goal for the Scholarship Initiative, raising $103 million since 2012, according to an article from the LMU Newsroom.

Pepperdine in Comparison with Public Universities

Larger public universities have raised either equally large or larger amounts than these private schools.

UCLA has been fundraising for their Centennial Campaign since 2014, raising $3.1 billion toward its $4.2 billion goal, according to the Centennial Campaign’s website. In the 2015-2016 year alone, UCLA raised $664 million, breaking the university’s previous record of $644 million raised in 2014-2015, a UCLA Newsroom article states.

Comparison of Long-term Fundraising by Year

These schools, with larger funds raised than Pepperdine, are significantly larger schools than Pepperdine. UCLA is encompassed of about 43,301 total students, about 43,401 students are enrolled in USC and UCI has about 30,836 students enrolled, according to the U.S. News & World Report.

Next in the ranking, Biola’s ‘A Soul of Conviction, A Voice of Courage: The Campaign for Biola University’ five-year fundraiser averaged to about $25.9 million in donations each year. LMU raised about $20.6 million each year for their Scholarship Initiative.

Berry said that donations to Pepperdine go toward a variety of places, with donors able to specify what their money goes toward.

“You can pick your Pepperdine passion and you can donate to that, whether that’s scholarships or you can donate to your IP program that you went to or your major/minor division, athletics,” Berry said. “You can do that whether you’re a student donating, alumni, or anyone else. You can be very specific, so it’s kind of like people are all giving to what they’re passionate about, about Pepperdine.”

Donations can also go toward scholarships, or funds like the Student Emergency Fund, Kappus said.

Pepperdine is raising money throughout the year, receiving donations every day Kappus said. While Waves on Call, Pepperdine’s student calling center, functions as a way to reach out to alumni for $5 asks, it also ensures they stay a part of the Pepperdine community, Kappus said.

Fundraising also occurs at alumni and Pepperdine events, as well as through emails, letters and online, Kappus said.

“Sometimes it’s hard to think about what other schools are doing because … we are so focused on trying to improve,” Kappus said. “We’re just continuing what we’re doing and trying to improve upon it everyday. We’re learning from so many experiences, like this giving day. It went so well and we’re so excited to already prepare for that for next year.” 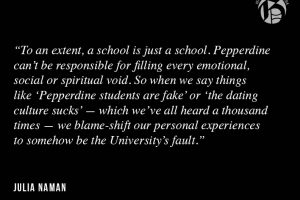 Graphic by Nate Barton A few weeks prior to graduation, nostalgic self-reflection has brutally ousted all work ethic....
Copyright 2013 Jupiter Premium Magazine Theme
Back to top