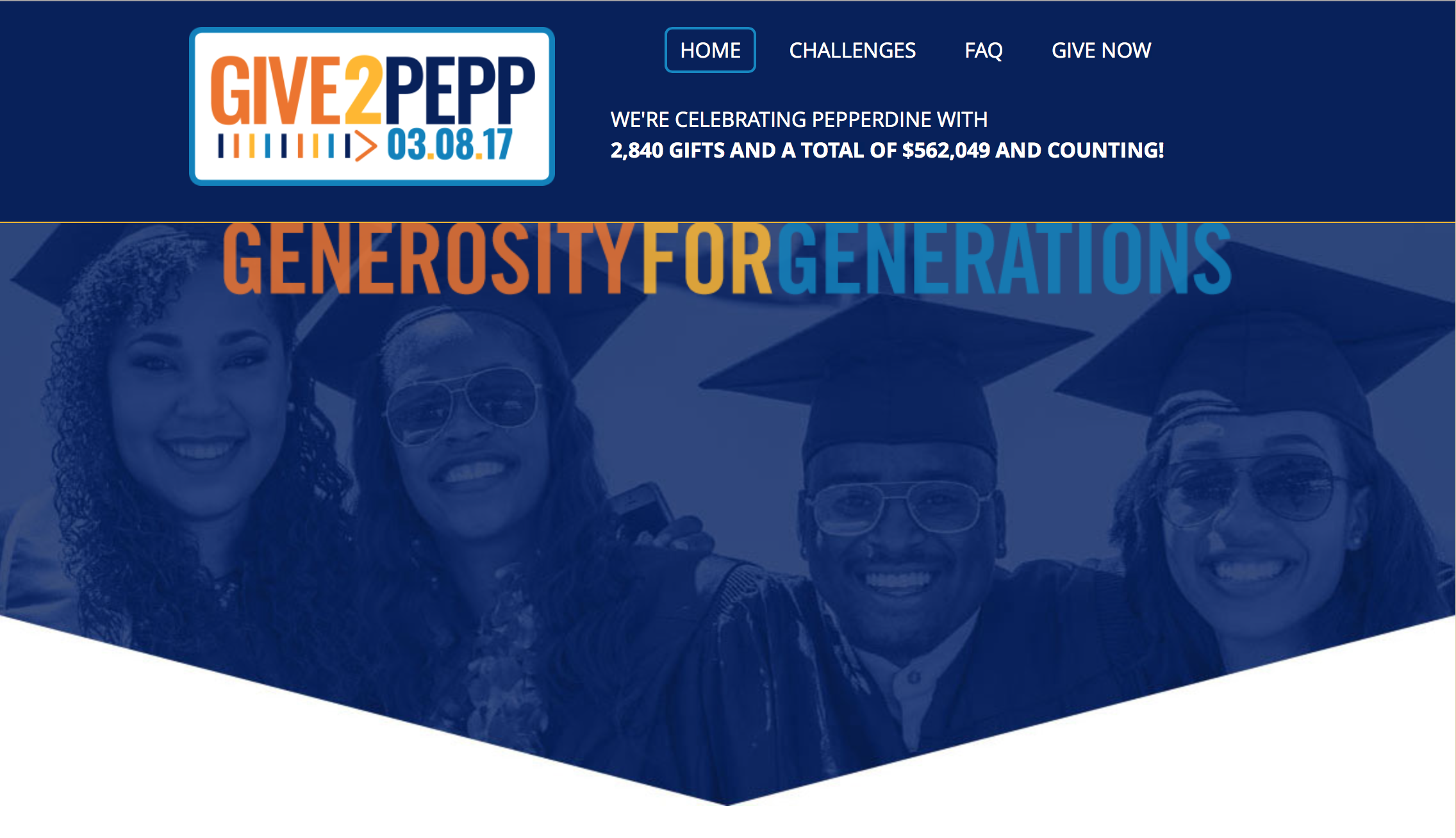 Pepperdine supporters across the world helped raise more than $500,000 for the university on March 8, during Give2Pepp, Pepperdine’s first online fundraising event.

The giving day — which actually spanned a total of 37 hours, designed to honor the university’s founding in 1937 and to ensure that every time zone had a chance to give — was held on www.give2pepp.com. It was created to bring together Pepperdine as a community, helping to further current and future students, according to the event’s website. Donors could designate their monetary gifts to their area of choice, such as specific schools, departments or programs. A total of $562,049 was raised in 2,840 onsite and online donations of at least $5, according to the event’s website.

“I think, for the first time out, this is a great success,” Benton said. “I love the idea that we encourage students that it’s not the size of the gift — it’s the fact that giving is going to mean a lot to their university, going forward, and certainly, it’s going to help us in national rankings. I think it builds great community spirit.”

Seaver Class Giving Officer of the Pepperdine Fund and 2014 Seaver alumna Angela Kappus said planning for this inaugural fundraising event has been ongoing for the past couple of years.

“We have just tried to rally all of our troops together,” Kappus said. “We’ve been working with so many different departments on campus — integrated marketing and communication, all of our alumni offices, all of the fundraisers at every school — just trying to get us all together for this awesome day.”

Director of the Pepperdine Fund Cynthia Ware explained how this event was prompted by the success Pepperdine students have had with Crowdfunding using the website impact.pepperdine.edu. Crowdfunding has given students the opportunity to raise money for individuals and groups in need of financial resources, according to Ware. Ware cited an example of how the Dance in Flight cast recently used the website to raise all the money they needed for a new dance floor.

Ware said the aim of Give2Pepp was to go even further than Pepperdine crowdfunding, and to create a bigger, single event to give the Pepperdine community the chance to come together to give back to the university, while simultaneously highlighting larger projects and needs.

“Rather than Crowdfund smaller initiatives, giving days provide nonprofits an opportunity to harness their entire community and spotlight larger projects and needs,” Ware said. “Having a single day of solidarity focused on online giving just makes good sense. Everyone gets to participate, and most gifts are incentivized with matching money.”

Ware explained how on this giving day, several departments joined together to garner support, from the Seaver Student Philanthropy Council, to the president’s office, to graduate students, to athletic coaches, and many others, making it a university-wide effort.

“This is what the future of fundraising looks like, where every department and individual person carries the message, rather than relying on a single team of fundraisers,” Ware said.

During Give2Pepp, many challenges were held, making it possible for people to show their advocacy for the area of Pepperdine that matters most to them. Many of the challenges included goals for certain numbers of people to donate within a certain period of time, or to donate a certain amount, unlocking further funding for the chosen area.

Ware said the fact that people from so many different departments partook in and backed this collective effort demonstrates advancements in Pepperdine giving culture.

“Pepperdine’s culture is changing,” Ware said. “There are not siloed departments waiting for the annual giving office to do all the fundraising.”

Freshman Joseph Lee was just one students who stepped up and gave back to a department that matters a lot to him.

“I gave to the psychology department because I am a psych major right now, and I wanted to show my support by allowing them to use my money to buy more resources, to encourage more learning for the incoming freshmen or the current students right now,” Lee said.

Ware said it’s important for students to understand that because Pepperdine is a private institution and nonprofit, they don’t qualify for government funds that other universities can receive. Even small gifts of just $5 help maintain confidence in the school and help further student achievement.

“Since we have a reputation for being elite and wealthy, most students just fall into the mindset that ‘Pepperdine doesn’t need my donation, but other charities do,’” Ware said. “This is a fundamental misunderstanding about how higher education works.”

“On the student side, we’re not trying to get millions of dollars,” Berry said. “We just want people to be involved and give back to the university.”

Pepperdine Student Philanthropy Council member and senior Madison Witte additionally pointed out that not only do donations help raise the university’s ranking, but the ranking of students as alum in the workforce, as well.

“Every donor that gives increases our degree,” Witte said. “So, after we graduate, our diplomas are worth more, so getting jobs will be better, and it’ll be easier.”

Final donor and dollar totals for Give2Pepp will be released March 24, 2017, according to the event’s press release.

For further information about the giving day, visit www.give2pepp.com.