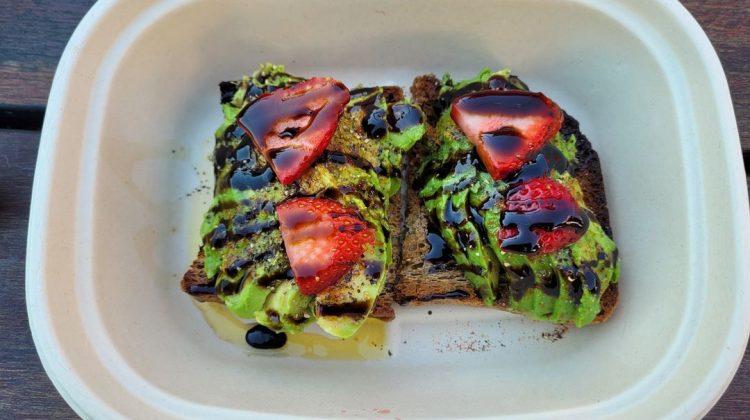 The avocado toast from SunLife Organics features sliced avocado on gluten-free bread. What sets it apart from other options however is that it is topped with strawberries and a balsamic vinegar drizzle. Photos by Hope Lockwood

La Cafe de la Plage Malibu, SunLife Organics, Blue Bottle and Ollo — are just a few of the options in Malibu that provide avocado toast as a menu option.

At each of these restaurants the brunch staple boasts a price tag of $11 to $14 and while students love avocado toast they are not a fan of the large price tag. Despite this, students and social media attest that it remains popular among diverse consumers.

“It’s become like a trendy thing to eat; they think they can charge you whatever and you’ll get it,” senior Jenn Gash said.

Many students said this dish has become quite popular in not only the Pepperdine sphere but all around the LA area.

Senior Alicia Wu believed its popularity was linked to both its simplicity and customizability.

“It is a good source of protein that is easily customizable and filling,” Wu said.

Sophomore Stella Engel linked the toast’s popularity with the health and wellness movement.

“It tastes good, but it’s a veggie so it’s good for me,” Engel said.

Gash said because she grew up in the LA area; she had always heard of avocado toast. However, when Gash went to high school, the meal had latched itself to YouTubers and other influencers. This popularity was what led to her interest in trying it.

Gash said when she first tried it, she put unseasoned avocado on untoasted wheat bread.

“I was like, ‘This is plain and not that good,” Gash said. “But once I started adding other things to it, I was like, ‘Wow, this is revolutionary.'”

Gash said she now puts an egg on her toast to add to the overall flavor.

Gash believes avocado toast has become so expensive because of its popularity, she said.

Gash’s recipe includes an over medium-fried egg and shredded cheese. She also recommends it with sourdough bread.

Senior Angelea Hayes said she first made avocado toast in high school for a family Christmas breakfast, she said everyone enjoyed it.

Hayes said avocado toast became a staple in her diet when she went plant-based because it was easy to make in the mornings. Hayes said she prefers to make it at home because she is able to accommodate her dietary needs. In addition to being plant-based, she is also gluten-free.

For her bread alternative, Hayes recommends either rice cakes, Trader Joe’s gluten-free bagels, or the Udi’s brand gluten-free bread. Hayes tops her toast with lime juice and Everything but the Bagel Seasoning.

During the 2019-20 school year, Hayes studied abroad in London. She said that was where she encountered the worst avocados she has ever had.

“Even when it was super ripe, [the avocado] It was hard. could hurt someone with it. It was hard and I couldn’t spread it easily. It was not appealing at all,” Hayes said.

Gash and Hayes both agreed that trends like ricotta toast and yogurt custard toast are just trends and they will never replace avocado toast. Hayes said she believes the rising popularity of plant-based diets, avocado toast will continue to become more and more popular.

“I think more variations of avocado toast will just continue to come out,” Hayes said.