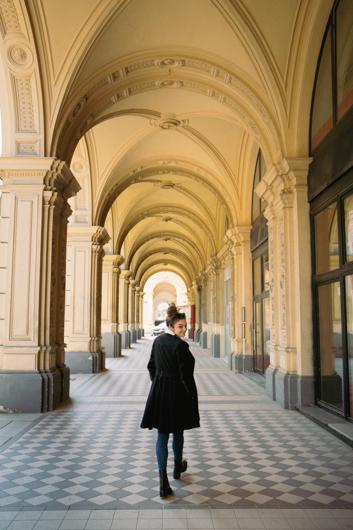 2020 alumna Milan Loiacono glances back at the camera while walking down a corridor in Vienna, Austria. Photo courtesy of Milan Loiacono

It’s a question that lurks in every college student’s mind.

What to do after college?

For some students, the answer is easy: Go abroad.

The decision to go abroad is the product of planning and conversations with advisers and professors. Students who go abroad take part in graduate school, research fellowships and organizations such as the Peace Corps, while expanding their view of the world around them.

“If you’re scared about being alone by yourself, like being alone or in a new place, you’ll make friends pretty quickly and it’ll be OK,” 2021 Creative Writing graduate Mary Buffaloe said. “Because in the end, if you actually care about what you’re doing it doesn’t really matter where you are.”

Buffaloe currently studies at the University of Lincoln in England, pursuing their master’s in Gender Studies. During their senior year at Pepperdine, Buffaloe said they applied to multiple schools in the United Kingdom.

“I really wanted a new perspective, specifically on feminism,” Buffaloe said. “I had gotten quite a bit of feminism in the U.S., and I wanted a more international approach to it and I thought that going to the UK would just be a really great opportunity to broaden my horizons and also just to see a new place.”

Buffaloe said the University of Lincoln had a similar application process to American schools, requiring applicants to write essays on why they wanted to attend Lincoln and propose possible dissertation topics.

In their classes, Buffaloe said they enjoyed being able to see a new perspective on gender studies. Their Pepperdine professors in gender studies prepared them to have discussions and gave them the background necessary to inform peers about subjects such as women’s issues in the United States.

“It’s really interesting to see another kind of power and how they take on different issues and how they perceive their own fallbacks as a society,” Buffaloe said. “It’s just fascinating to me.”

Milan Loiacono, former editor-in-chief of Currents and 2020 Seaver graduate in Italian and Intercultural Communication, is currently pursuing a master’s degree in Linguistics at Trinity College in Dublin, Ireland.

Going abroad after graduation was always a possibility, Loiacono said, but it was not part of her original plan. During her postponed graduation in 2021, Loiacono reconnected with two of her professors who encouraged her to look into international graduate school and mentioned the lower cost.

“I just love that feeling of being surrounded by history and kind of having a very rooted sense of place,” Loiacono said. “I remember writing in my abroad journal. I looked back at it this year, but I wrote like ‘Wow, that was so cool I wish I could go to school there,’ but I had no concept in my head at the time of going to grad school.”

Loiacono said applying to graduate school was somewhat unfamiliar because she had only applied to undergraduate schools in the U.S., where she had some understanding about college expectations. Unlike when she studied abroad in Florence, Loiacono did not come in with the expectation of traveling every weekend.

“When I showed up for the masters, I kind of came in with the expectation of ‘I’m going to study, I’m not here to study abroad,’” Loiacono said. “I just happened to be an international student that is studying in Dublin. It was like a normal school year just in a new country.”

Loiacono said going to grad school abroad is a good way to obtain a well-rounded worldview and look at the world in a non-American perspective.

“I think it’s a fantastic experience and definitely worth it,” Loiacono said.

Juan Carlos Hugues, a 2021 alumnus who majored in Religion and Psychology, is currently in the French part of Switzerland at the University of Lausanne, researching LGBTQ+ community member’s Christian experiences. He had previously looked at the topic with Pepperdine Psychology Professor Steven Rouse, and hopes he can apply his research to other countries.

“It seems like a timely project to see the experience of LGBTQ+ people, specifically LGBTQ+ Christians,” Hugues said.

Hugues said he applied for the Fulbright Scholarship in 2020, but did not receive the grant. The Fulbright program has thousands of slots open to research hopefuls. However, he was able to receive a Swiss research scholarship. The scholarship provides funding for three months, and Hughes is using his savings to stay in Switzerland for the year.

“I really loved it,” Hugues said. “I fell in love with the chocolate, the mountain, the people. It called me a lot, even after I had left, and so I thought ‘This is something I wanted to do after college,’ but it really solidified last year.”

Hugues said he loves the French-speaking part of Switzerland.

“So really this program is an embodiment of all that I love, which is French psychology, LGBTQ+ topics, Christianity research,” Hugues said. “And Pepperdine truly did expose me to a lot of it.”

Dana Dudley, assistant dean of Special Graduate and Special Academic Programs, said she advertises abroad fellowships to students and helps them through the application process. There are many different fellowships, all with their unique application requirements.

After coaching students toward the fellowships that best meet their interests, Dudley said she encourages them to do research on their own. Dudley is also there to offer help to students who are struggling or have questions. For most students, the essays are the most challenging portions.

“They need to really understand that fellowship and what type of candidate they’re looking for, and make sure that they are that kind of candidate and then be able to talk about that in their essays,” Dudley said.

Fulbright does not list a GPA requirement, Dudley said. Where the Rhodes fellowship, an award for graduate students to study at Oxford, looks for high academic performance, Fulbright looks more for involved students.

Student applies to the Peace Corps

Senior Psychology major Michaela Gromer said she recently applied to the Peace Corps, an international service organization, with the hope to begin work in summer 2022, shortly after graduation.

The Peace Corps accepts one in three applicants per year, an acceptance rate similar to Seaver College, according to MV Organizing. Peace Corps volunteers work in specialized groups alongside the international community.

In her junior year, Gromer said she began looking at the Peace Corps after attending a virtual fair at Pepperdine. She was drawn to the benefits of the Peace Corps, which include a two-year paid job, a $10,000 stipend and the potential for the Corps to pay for graduate school.

“I was also interested in taking some gap years because I’m tired of learning, it’s been a long four years,” Gromer said. “So I was like ‘OK, this feels good. Two years would be perfect before grad school.’”

Gromer said she filled out an application for the Youth and Development sector because it relates to her Psychology major and her experience working with children.

Gromer said she was comfortable with the Peace Corps’ mission of being a small piece in a larger whole.