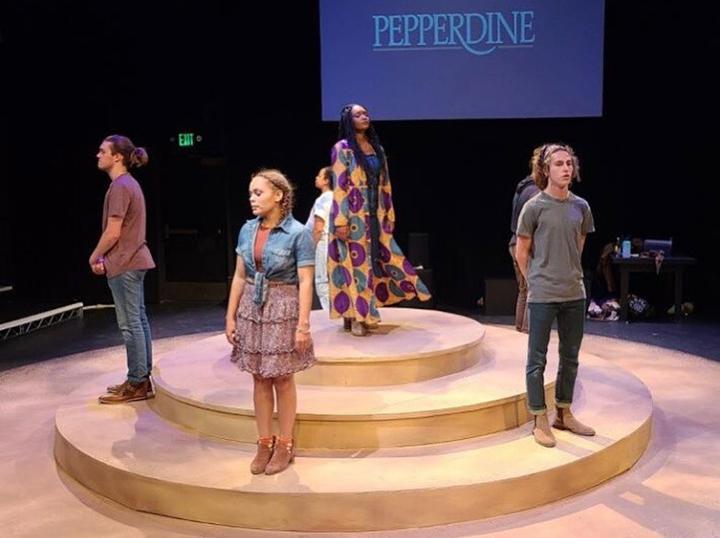 “We Are Proud to Present”‘s six cast members stand on stage after their emotional final scene. The actors returned to the stage, reentering the theatre to do their last bows. Photo courtesy of Bradley Griffin

The Pepperdine Fine Arts Division showcased a play titled, “We Are Proud to Present A Presentation About the Herero of Namibia, Formerly Known as South West Africa, From the German Sudwestafrika, Between the Years 1884-1915” by playwright Jackie Sibblies Drury, from Tuesday, Sept. 28, to Saturday, Oct. 2.

“We Are Proud to Present…” centers around three Black and three white Americans attempting to tell the story of the historical Herero Genocide. The ensemble reenacts different events from that period using letters a German soldier would write to his loved one, “Sarah.” Each character holds conflicting perspectives on how this story should be told, mainly due to the racial and ancestral differences within the group.

Professor of Theatre, Acting and Directing Nic Few directed “We Are Proud to Present…” and said directing this play felt like he was answering a call in his ministry.

“At a time when the Pepperdine community was buzzing about diversity, Critical Race Theory, as well as inclusion as it pertains to disenfranchised communities, this show was the answer to that call,” Few said. “Any director worth their title will let the needs of the community guide their choice in the show.”

“I enjoyed many aspects of the play, but the two most enjoyable things were how natural the acting was and the way the history was presented,” Harutunyan said. “The acting was so natural that it was as if we were right there in Sudwestafrika during the German colonization, witnessing the horrible way the Germans were treating the Herero Tribe.”

Theatre Major Debay, who played Actor 4: “Another Black Person,” said she had a mix of emotions acting in this play.

“I was excited because it was the first play that I got to do since the pandemic,” Debay said. “I was also really nervous about the subject matter, how the community would take it, and how us as actors would have to continuously carry that load.”

As rehearsals picked up, and the show opened, Debay said it was scary, but definitely exhilarating getting to perform the show with this cast.

Lead actor and Theatre Major Perry, who played Actor 6: “Black Woman,” said doing the show was a fun way of self-discovery, as she found the humanity of her character. Perry said it was interesting because the characters are in some ways just like the actors and in other ways not.

“I found so much of myself in Actor 6, the way she holds herself and wants things to get done a certain type of way,” Perry said. “The way she decides to deal with a lot of things that come up throughout the show is interesting to say the least.”

Theatre and English Major Conrad said some nights, it was a real battle to get through the end of the show.

“The strength that me and the cast depended on night after night came from the fact that in order to give truth and justice to the victims of hate and terrorism, we have to go to that scary place where no one is comfortable,” Conrad said.