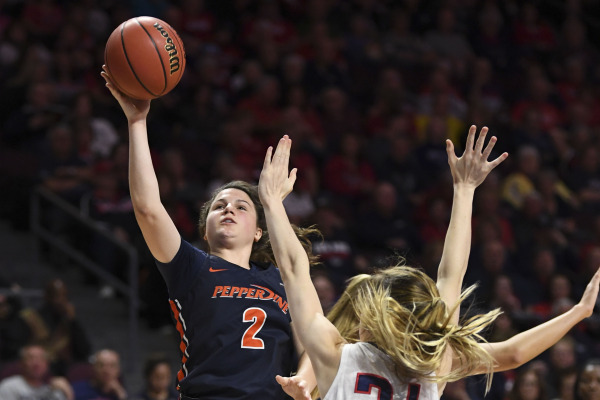 LAS VEGAS — If the fourth quarter was any indication of what the future holds in the DeLisha Milton-Jones era, then Pepperdine women’s basketball experienced more than a mere silver lining in their 81-70 loss to Gonzaga in the WCC Quarterfinals.

“It was a tale of two halves for us,” Milton-Jones said. “[In] the first half, that was a team that we’ve never seen before. But in the second half, we displayed what Pepperdine Women’s Basketball is all about. We’re about changing this entire culture and everyone’s perspective of us within the WCC and the women’s basketball world as a whole.”

But just like the Waves have done all season, the Women’s Basketball team used a 32-point fourth-quarter rally — in which the team shot 73.3 percent from the field and 75 percent from three — to keep things interesting against top-seeded Gonzaga.

“I think we did a phenomenal job of coming out and asserting ourselves in the third quarter,” Milton-Jones said. “We scored 32 points in the fourth quarter alone. That shows the type of team we are, and the team that we will be for years to come.

Early on, the Waves didn’t look like the hot-shooting, high-flying team from the first round win over Santa Clara. Led by All-Conference Player of the Year Jill Barta, the Gonzaga Bulldogs sprinted out to a — spearheaded by not only an 8-0 run to start the game, but also an 8-0 run from Barta, who exploited mismatches deftly in the pick-and-roll.

“We came out hot in the first half and we talked in the locker room that we needed to get out hot in the second,” Gonzaga senior forward Jill Barta said. “But Pepperdine came out on fire. Of course, they had a really good fourth quarter. It was some of what they were doing and some of what we weren’t doing. We need to fix some stuff on offense, fix some stuff on defense and not be lackadaisical.”

After letting Gonzaga carry a 29-point lead into halftime, the Waves chipped away. Scoring stalled on both sides during a whistle-heavy third quarter, which set up the fourth-quarter surge. Robinson-Bacote took the lead with several aggressive drives and key threes.

“We knew [the fourth quarter] was our last chance to show some fight in us,” Junior forward Yasmine Robinson-Bacote said. “We gave it all we had. We gave Gonzaga our best shot, and that’s all that we could ask for.”

Robinson-Bacote led the Waves again with 19 points — including 3-6 from three —and seven rebounds. Undeterred from a right hand injury from late in the Santa Clara game, Paige Feckse added 16 points and six rebounds on 50 percent shooting.

“The coaching staff gave us a lot of confidence and told us to play the best that we could,” Robinson-Bacote said. “We didn’t show what we could really do in the first half, so we threw caution to the wind — as Coach DeLisha likes to say — and decided to fight.”

But at the end of the day, a slow first half doomed the Waves against a skilled, athletic Gonzaga team.

“I thought our team had a great first half,” Gonzaga Head Coach Lisa Fortier said. “I love the way we were sharing the basketball. We were getting great shots and we were running in transition. There weren’t many [shots] I looked at and didn’t like.”

The upstart Waves garnered high praise from Fortier, the three-time West Coast Conference Coach of the Year, after the game.

“Give [Pepperdine] credit,” Fortier said. “[The coaches] say all the time — and I’ll sound like a broken record — that we can’t help [our players] on the three-point shot, but we can help them on the drive. So if we’re going to let [Pepperdine] shoot threes, then they’re probably going to go in and we can’t help them [on defense] when that’s happening. We needed to do a better job on our ball pressure.”

Although the Waves’ season ended with a 10-20 record, Milton-Jones’s first season at the helm ended in the first double-digit win season since the 2011-12 campaign, in which the Waves finished with a 15-15 record.

“I’m so proud of all the young women on this team, and everything they’ve committed themselves to in my first year as a head coach,” Milton-Jones said. “We had so many reasons to not be anything, and to not be the subject of any conversation, but we gave everyone many reasons to talk about us. For that, I am so proud.”