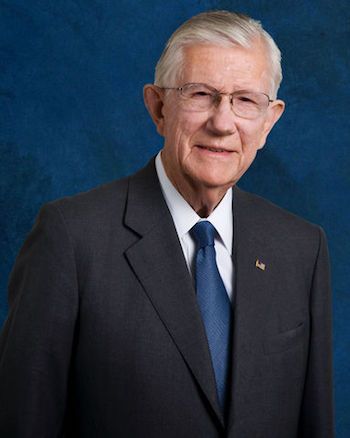 The Pepperdine community mourns the loss of Chancellor Emeritus Charles B. Runnels. He passed away Tuesday at the age of 91.

Runnels came to Pepperdine in 1967 from Houston-based Tenneco, Inc. to help find a new campus for George Pepperdine College, which was then located in South Central Los Angeles.

He joined the selection committee that ultimately chose to develop the Malibu campus, and he became involved in construction plans for Seaver College, which opened in 1972.

Runnels personally raised money for thousands of student scholarships, always keeping students his top priority, according to the press release.

“With no exaggeration, Charlie Runnels was Pepperdine’s most successful fund-raiser,” Benton said. “The Malibu campus, the Page Apartments, the McConnell School of Law facility, the Raitt scholarships, the Seaver scholars program and on and on were the product of his ability to make deep, impactful friendships. I have never seen anyone like him.”

Retired Professor of Education Susan Giboney said he was one of the best ambassadors for the Pepperdine community.

“I think he gave Pepperdine a very good name with all of our donors; he was very good at raising funds for Pepperdine,” she said.

Giboney said she got to know him because her husband served on the Board of Regents.

“He was loved wherever he went,” Giboney said. “He was very friendly, he was very bright about his decisions that he made for Pepperdine, very articulate about who we are and our mission,” she said.

Runnels was also the founder of the Youth Citizenship Seminar. Each summer, the five-day program brings 250 high school juniors to Pepperdine to explore themes of free enterprise, leadership, freedom and faith.

Junior Lyle Nelson got to know Runnels when he attended YCS in 2013 and Nelson said he is one of the main reasons why he chose to attend Pepperdine.

“I don’t say this lightly, but Mr. Runnels was one of the best men I have ever met,” Nelson said. “He was an incredibly encouraging, generous, patient and attentive man with a rock solid faith in God that was always apparent.”

Nelson said he is thankful for the time he got to know Runnels.

“He took an interest in me, one student from a small town in Texas, and took time to talk to me and genuinely care about me,” Nelson said.

In 1972, the Runnels family gathered for the dedication of the Raleigh Runnels Memorial Pool at Firestone Fieldhouse. The pool honors the Runnels’ second son, who passed away from cancer the year before he would have been a freshman at Pepperdine.

Runnels was a strong supporter of Pepperdine athletics and he was often seen at the sidelines at Waves sporting events.

He also received an honorary Doctor of Laws degree in 2010 at the Seaver College commencement ceremony in recognition of his many decades of service to Pepperdine.

Runnels was a father and a grandfather in the Pepperdine family as three of his children, two of their spouses and three of his grandchildren graduated from Pepperdine.

A memorial service will be held for Runnels on Nov. 28 at 10:30 a.m. in Firestone Fieldhouse.