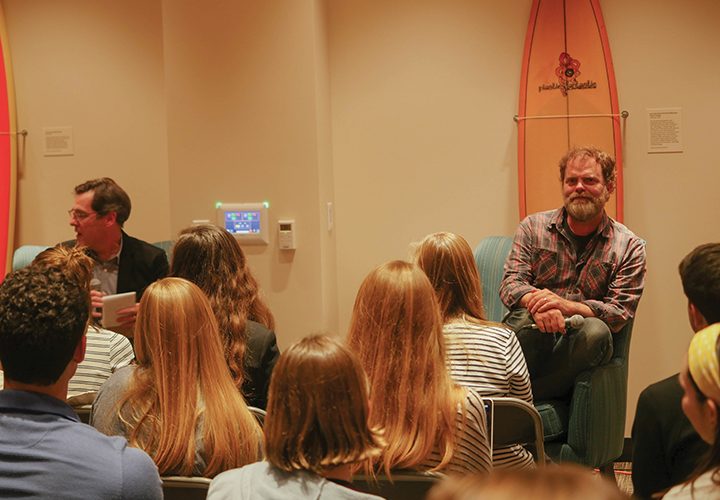 Pepperdine’s Surfboard Room was standing room only Wednesday night when former “The Office” actor and lifelong Baha’i Rainn Wilson was invited for a panel discussion and film screening on the Baha’i faith.

The Center for Faith and Learning hosted a religious literacy event on the Baha’i faith with guest speaker Wilson on Wed. Feb. 7 at 7 p.m. John Barton, director of the Center for Faith and Learning, introduced and led the discussion with Wilson. The two friends engaged in humorous banter, as Wilson’s first statement was a popular ‘The Office’ reference, “bears, beats, Barton.” But they also emphasized the importance of the event. 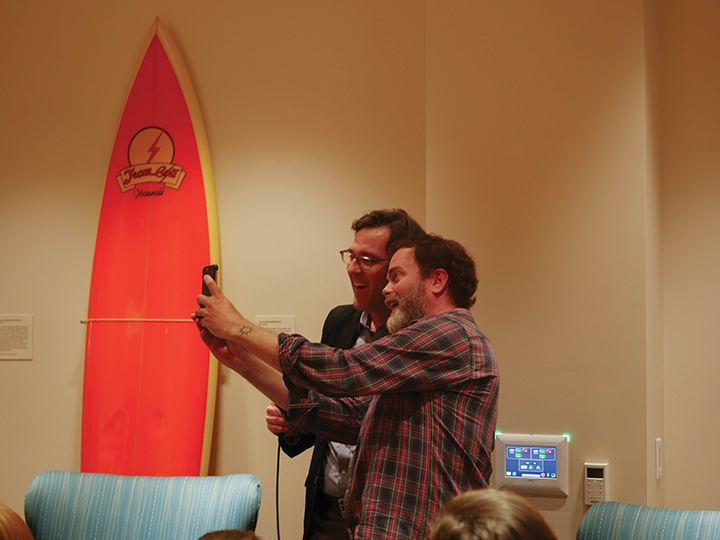 “The Center for Faith and Learning is trying to help us establish what it means to be a Christian University,” Barton said prior to the event. “Part of the way we define our Christian identity is by being a place that is hospitable to all kinds of different people, cultures and religions.”

Barton credited Baha’i Pepperdine senior Mateen Taghizadeh with inspiring and helping organize the event. Barton continued to stress the importance of knowing those around us when the event began.

“It has never been more important than now to understand our global neighbors,” Barton said. “The Baha’i faith is a significant religion. It’s new and young, but it’s growing to every corner of this planet.”

Baha’i celebrated the bicentennial of its founder, Bahá’u’lláh, in 2017 as shown during the film screening of “Light to the World.” Wilson introduced the film and explained Bahá’u’lláh’s purpose to unite all of mankind.

“The film shows how Baha’i dives into great social issues, like racism and gender equality, as a religious faith,” Wilson said. “The message is to promote unity.”

The first 50 minutes of the event were spent screening “Light to the World.” The film followed the life of Bahá’u’lláh, the promised messenger of God and his teachings. After the screening, Barton led a question and answer session with Wilson to understand more on the Baha’i faith.

Wilson said his faith journey began when he was born into a Baha’i family, but he moved to New York City and left his faith in his 20s. He shared his journey of rediscovering faith as he was pursuing acting.

“Before I got the role of Dwight, I had been acting for 14 years,” Wilson said. “They were very minor roles, but I was excited to be acting … But throughout this, I found I was unhappy and deeply unsettled. All throughout this artistic journey, I was needing to make a journey in faith.”

Wilson continued to explain the significance of reflection on oneself and his or her faith.

“If you believe in God, then you ask ‘What is He wanting you to do?'” Wilson said. “It is the most important question you can dig into, ‘what is the meaning of all of this?’ Ultimately, religion is about making oneself a better person and making the world a better place.” 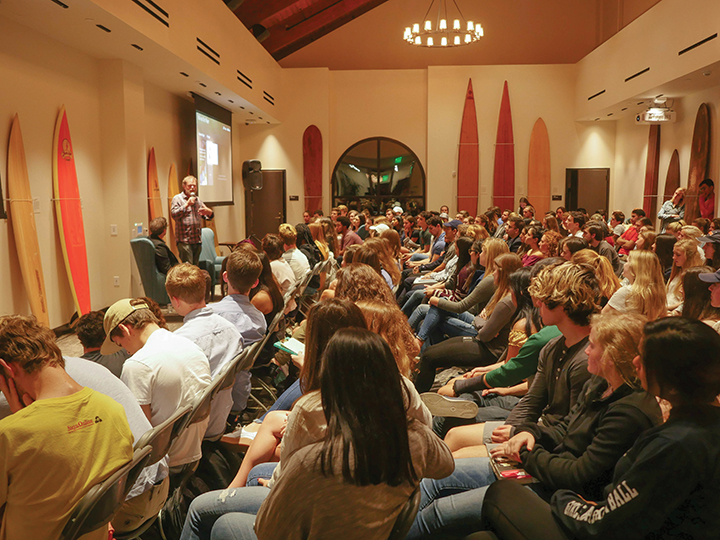 The question and answer was then opened for students to ask more about the Baha’i faith. Questions covered a variety of topics from the belief of an afterlife, to the Baha’i standpoint on homosexuality, and to its relations with Christianity. Wilson said Baha’i teaches there is only one religion in the world which his nine-point star tattoo depicts. The Baha’i star symbolizes the unity of the nine major world religions.

“If we do not unite, humanity will wipe itself out,” Wilson said. “Faith communities need to stick together, and we need to build the kingdom of God on Earth.”

Pepp IT To Students: Don't Be Lured By Phishing Emails 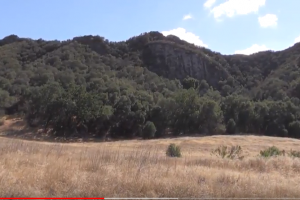 We live in their habitat. Park officials have a reminder after two notable mountain lion incidents. A mountain lion approached...
Copyright 2013 Jupiter Premium Magazine Theme
Back to top