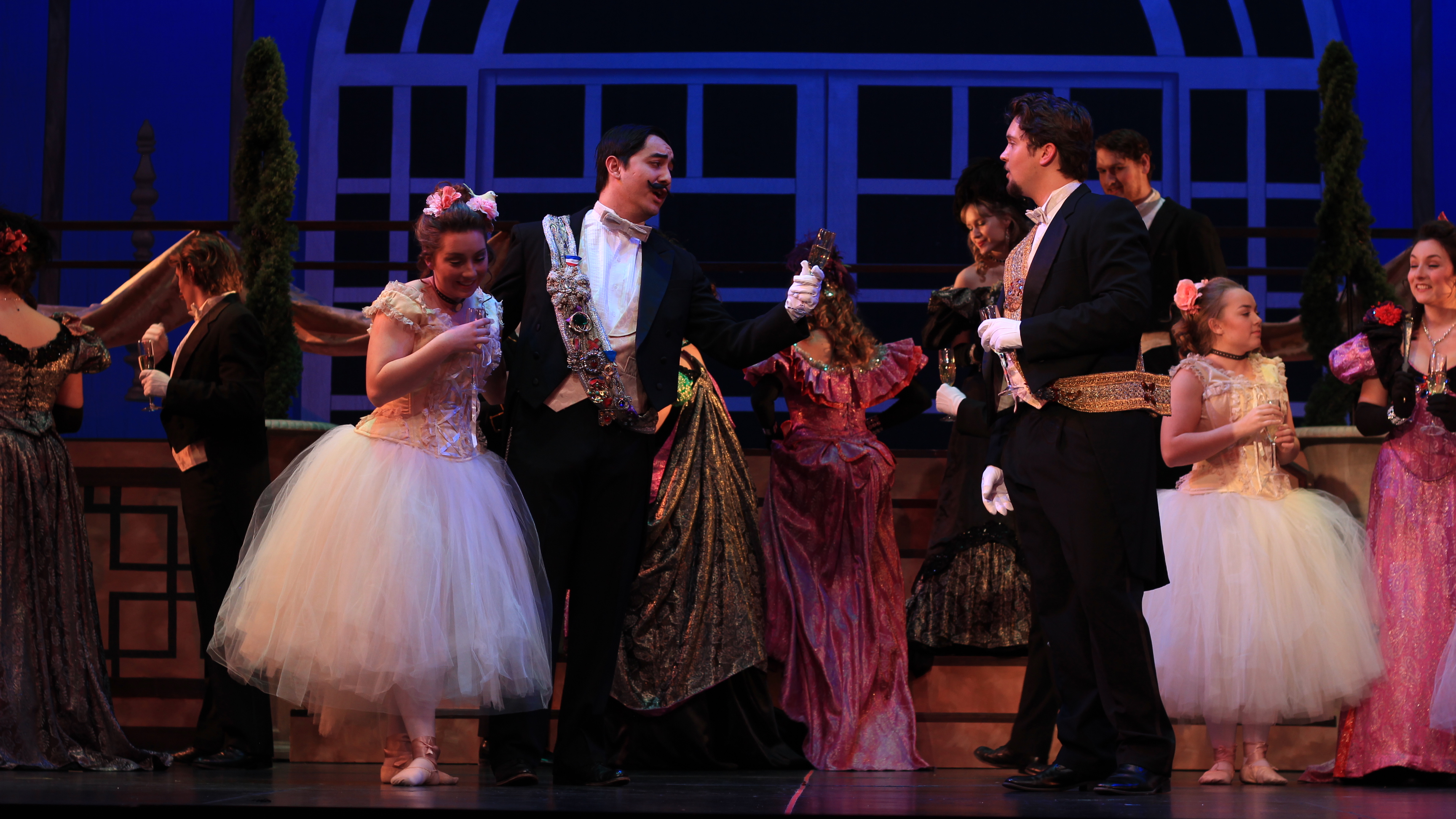 The all-student cast of “Die Fledermaus” will be present the traditional German opera in Smothers Theatre on Thursday, Feb. 21 and Saturday, Feb. 23 at 7:30 p.m.

“She is a character that helps drive the plot,” Ujifusa said. “It’s a whole comedic revenge story. It’s kind of ridiculous and wouldn’t actually happen in a span of 24 hours, but it’s a fun little lighthearted revenge story.”

The dialogue of the production will be in English, while the singing will be done in the traditional German. 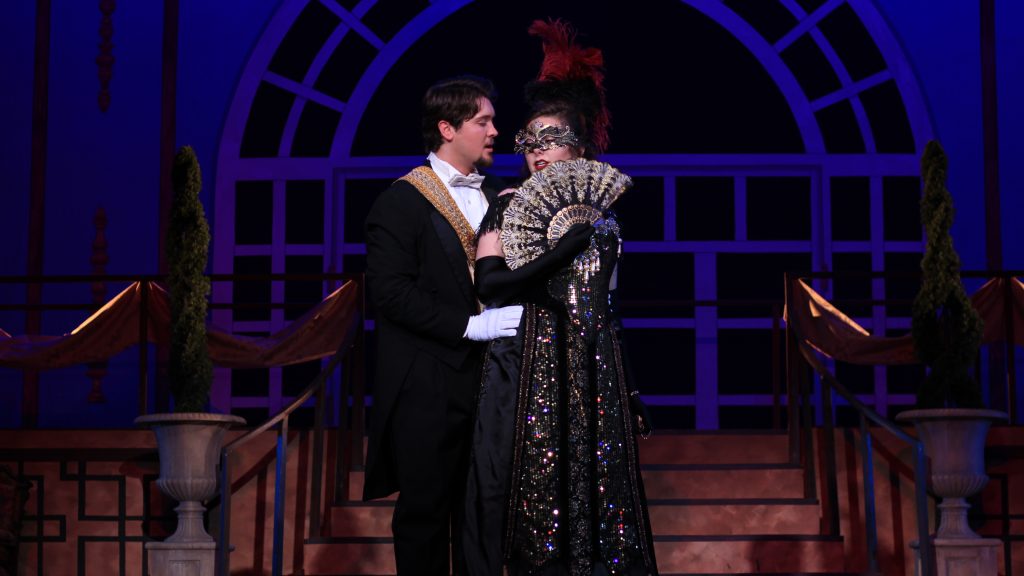 “I think it’s pretty common to do that on college campuses just for accessibility purposes,” Ujifusa said. “I think it’s hard to do the music in English just because the translation doesn’t work out. We sing in German, and there is a projector that has word-for-word translation on the spot as we’re singing.”

“It’s all these crazy turns,” Hebel said about the plot of the show. “It’s wild. It’s a good time though.”

Ujifusa said casting for the show was in the fall, so the Fine Arts Division and its students have been working on the show for a while. 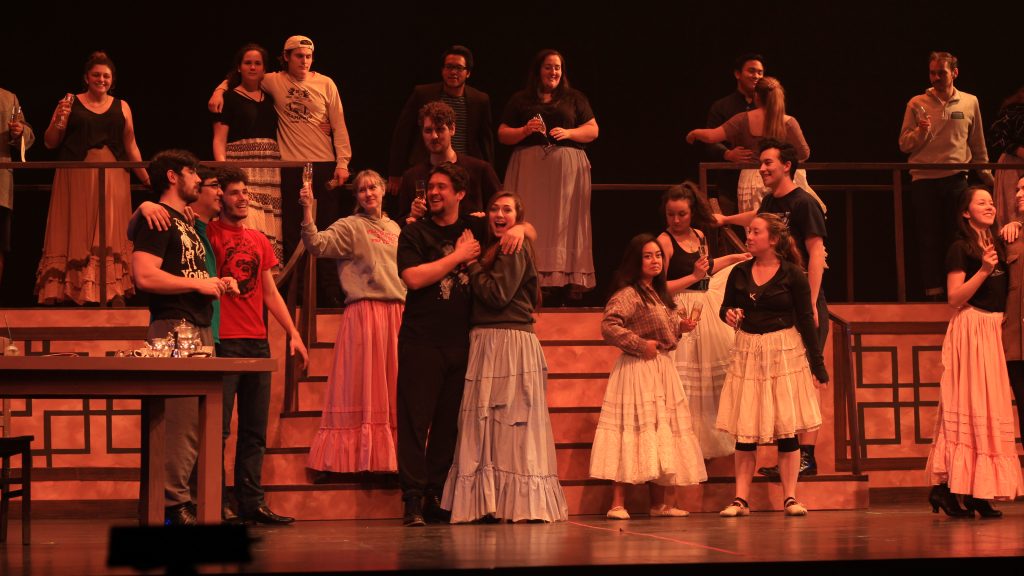 “I think a lot of people would be surprised at how much they would enjoy it,” Ujifusa said.

There isn’t much opera in the area and though opera isn’t as popular as it has been in the past, “it’s still beautiful music and beautiful storytelling,” Hebel said. “And it’s nice to share that with the Pepperdine community. I know the older community loves to come and see it because they don’t want to have to go all the way down to LA, but it’s great for Pepperdine students to get a taste of it as well. Come see the Opera!”

“It is a privilege to work with our talented and dedicated students on an operetta that has stood the test of time,” Keith Colclough, assistant professor of Music and director of opera, wrote in an email.

“We are singing all of the music in German and several of the roles stretch the singers’ voices to the extremes of their vocal ranges,” Colclough wrote. “Also, the style of 19th-century German operetta is rather different than the music most of our students grew up listening to, so we have to adjust the musical language our students use to emote. Finally, our singers have to compete with a 48-piece orchestra without microphones, meaning that even though it feels natural to look at your colleagues onstage, everything has to be sung toward the audience so the voice can be heard in the hall.”

Colclough wrote that “Die Fledermaus” is a comical opera full of “witty intrigue and infectious waltzes.” Colclough added that the show explores social issues such as “social hierarchy, fidelity, and responsible alcohol use.”

“College is an unmatched opportunity to explore new art forms, hobbies, and academic subjects,” Colclough wrote. “An opera ticket in LA costs between $70 and $200, so this is a bargain right on campus. The cast has been working on this show for five months, and it is a substantial achievement. Most importantly, it should be a fun night with beautiful music.”

Tickets cost $10 for students and $20 for all other attendees. They are available to buy at the Smothers Theatre box office or online. For additional information about the show, visit the Center for the Arts website.