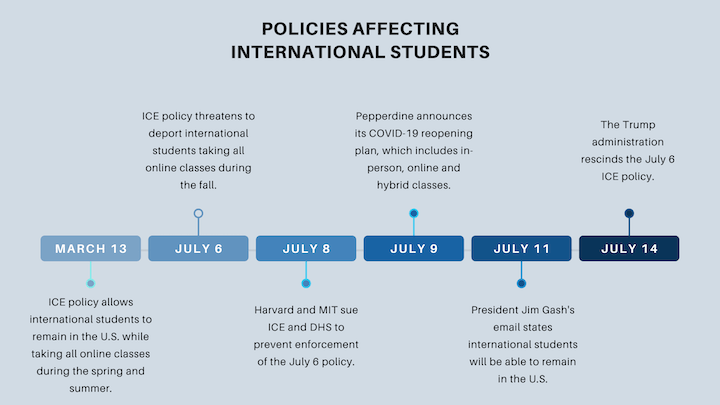 On July 6, Immigration and Customs Enforcement (ICE) announced changes to the Department of Homeland Security’s Student and Exchange Visitor Program (SEVP) that would force international students holding F-1 and M-1 visas to leave the United States if they were enrolled in only online classes during the fall 2020 semester.

“Active students currently in the United States enrolled in such programs must depart the country or take other measures, such as transferring to a school with in-person instruction to remain in lawful status. If not, they may face immigration consequences,” according to the ICE news release.

This update contradicted ICE’s March 13 announcement, which — due to the COVID-19 pandemic — allowed international students to participate in fully online instruction and remain in the United States for the spring and summer semesters.

Harvard and MIT — followed by the University of California and California State University systems — filed a lawsuit against Immigration and Customs Enforcement and the Department of Homeland Security on July 8, seeking a restraining order and injunctive relief to prevent enforcement of the order, according to CNBC. Colleges and universities around the country announced plans to sign amicus briefs in support of this lawsuit. Seventeen states, including California, also filed a lawsuit against the government.

Following this backlash, the Trump administration rescinded the policy July 14, as reported by NBC; all international students, including those attending entirely remote universities, will now be able to reside in the U.S.

In a July 11 email titled “A Message from the President: Supporting Our International Students,” President Jim Gash assured the community that the University was taking immediate action to prevent the July 6 ICE policy from negatively impacting international students.

After emphasizing the contributions of international students, Gash wrote that the hybrid model outlined July 9 in Pepperdine’s COVID-19 reopening plan would enable international students to stay in the United States. He also wrote that he collaborated with other universities and their leaders in an effort to have the ICE policy withdrawn, including sending letters to members of Congress.

“I’m really proud of Pepperdine’s response in such a timely manner,” Mitchell said. “Even though Pepperdine largely is in that hybrid modality, we definitely have come out as a university in support of higher education and international students more broadly.”

Mitchell, however, acknowledged that many students were frustrated by Pepperdine’s three-day period of silence following ICE’s July 6 announcement, which she said was necessary for finalizing plans.

With travel regulations and expenses, embassy and border closures, month-long quarantine requirements and other proclamations, many international students are unable to return to the U.S. Thus, Mitchell said the Seaver Dean’s Office has worked hard to ensure international students have both online and in-person options for their classes.

Due to how rapidly the situation is changing, Mitchell said she is unsure of exactly how many international students will return to campus.

“It’s too hard to tell at this point, but we will have a significant decline in international student presence on campus this fall, unfortunately,” Mitchell said. “We’re all so sad about that because their presence is so important for Pepperdine, but we are going to do our very, very best to try to keep them engaged with the community and provide opportunities for them to infuse who they are in our classrooms despite being around the world.”

All three international students interviewed said they were confused and upset about the July 6 ICE announcement.

Hannah Tu, a senior international student from Taiwan, said this policy revealed government flaws and denied her the full experience of studying abroad. For her, the most frightening part of this situation is how unpredictable it is.

“When I heard the news, I didn’t believe it was real,” Tu said. “[The government] just started kind of targeting us on the matter, and I’m not really sure if it had anything to do with politics or anything to do with the virus itself, but I feel like the policy just doesn’t really make sense.”

“The policy they set up is just very mean,” Gao said. “We pay a lot of money to go to school here, and suddenly, they just issued this policy and said we have to go back to our country to study online courses, which is unfair. It’s definitely not good for society or for international students.”

Gao said if the government had forced her to leave the United States, she would have taken a gap year because taking all online classes is not worth the cost of Pepperdine’s tuition.

Similarly, Cecilia Li, a sophomore international student from China, said she chose to attend Pepperdine because of its beautiful campus and opportunity for close-knit relationship with professors — elements that depend on in-person learning.

Confident that Pepperdine would not be the same without the presence of international students on campus, Li said the opportunity for domestic students to befriend people from all around the world enables open-mindedness.

“I love learning about different cultures and seeing how other people are different than me — their environment, where they were born — and I think diversity is one of the biggest contributions that the international students bring to Pepperdine,” Li said.

Gao, Li and Tu said they are pleased with Pepperdine’s decision to offer online, in-person and hybrid classes because it prioritizes students’ individual needs and ensures international students can remain in the country of their choice.

Although her time zone and fewer options for online classes present academic challenges, Tu said the ICE rule prompted her to stay in Taiwan for the fall semester. She does not want to risk the cancellation of her student visa upon entering the U.S., and — like Gao and Li — she is concerned about the health risks involved in returning to campus.

“I’m kind of scared about coming back, honestly — not just the virus and not just getting stopped, but also all of the racism that has been going on,” Tu said. “I don’t know if I want to go through that. It’s been really tough for a lot of Asian people.”

Gao, Li and Tu agreed OISS has done a good job of communicating with international students and providing helpful resources amid the evolving government regulations.

A former OISS employee, Li said she is grateful for the continued support of the OISS staff. She still remembers the impact her international student ambassador had on her during her freshman year and believes they are an essential resource during this time of uncertainty.

Although Gao is happy with the way Pepperdine has assisted her community, she said she believes there is always room for improvement, especially considering that the University’s announcements tend to be vague.

“[International] students were panicking, and at the time we needed the school the most, they weren’t there,” Gao said in reference to the three days of silence. “They didn’t react in time, but I can see they were trying to.”

Gao, Li and Tu said the Trump administration’s decision to rescind its previous regulation greatly relieved international students and their families. They are grateful that others took action against the July 6 ICE policy, from universities suing the government to a Pepperdine student creating a change.org petition.

In the fall, Gao hopes to take all in-person classes, Li will now be able to take more online classes without the possibility of being deported, and Tu plans to remain in Taiwan since she already canceled her flight and on-campus housing contract.

“You don’t really see how precious your daily life is until you lose it all,” Tu said.