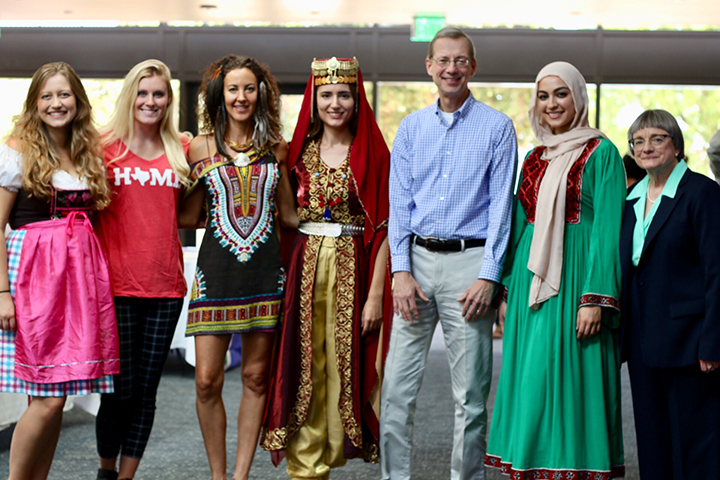 Photos courtesy of the Pepperdine School of Law

Pepperdine Law School advocated and supported their heterogeneous student body last week with their annual Diversity Week. This consists of three consecutive days with an event on each day meant to honor a wide array of cultures: Global Village Day, Open Conversation and an interfaith diversity panel.

The week began Tuesday Sept. 18 with Global Village Day, a celebration of the diversity represented at the Law School through food, music and fashion, according to the Pepperdine Law Surf Report. Attendees of the event hosted and browsed tables representing cultures from Texas to India.

“It’s such a fun event to see all these students show up from China, from New Mexico, from all places just celebrating their background, their past and their heritage through food and clothing,” Brenna Stanberry, executive assistant to the associate dean for administration, said.

“Our hope is that even if you’re born and bred in California, you bring something diverse to the table,” Goodno said. “We can celebrate all the different types of diversity, whether it’s where you’re from originally, what your background is [or] where you want to travel.”

Global Village Day on Sept. 18 was an opportunity for different cultures to educate one another, Kathleen Horton, administrator and event coordinator in the Career Development Office, said.

“It was cool to go around and see all the different cultures and people dressed in garb from all these [diverse] cultures,” Horton said. “It was pretty enlightening. I learned a lot.”

The second day of Diversity Week, held on Wednesday Sept. 19, was Open Conversation, a space for organic discourse on pressing issues of our day, according to Surf Report.

“[Open Conversation] is basically a room for students to come, and it’s moderated by various faculty members,” Goodno said. “They talk about a current event. The topic this year was about the Nike ad.”

There was also discussion of the Black Lives Matter movement and the controversy surrounding the refusal of many NFL players to kneel during the National Anthem in protest of police brutality, Goodno said.

To close Diversity Week, students attended an Interfaith Diversity Council Panel Sept. 20. This year, Professors Gregory Ogden of administrative law, Ahmed Taha of Civil Procedure, Victoria Schwartz of Intellectual Property Law and Sukhsimranjit Singh of Dispute Resolution served as panelists, according to Surf Report. Sara Barton, university chaplain, moderated the panel. It was a platform for students and faculty to inquire into and learn about other faith systems.

“Faculty panel members from all different faiths, including Christianity, Islam, Judaism, and Sikhism, [spoke] about their personal faith backgrounds and how their respective faiths inform their engagement at Pepperdine,” according to Surf Report.

Diversity week is a popular event and is expected to continue for many years, Goodno said.