In one of the most heated city council elections in recent years, city council candidates Skylar Peak, John Sibert and Joan House won the three available open seats from the field of seven, winning over Missy Zeitsoff, Andy Lyon, Hans Laetz and Hamish Patterson according to the City of Malibu.

Peak, a 27-year-old Malibu native, business owner and Pepperdine graduate received 1466 votes. As the youngest candidate he received the most support from voters with a platform based on voicing community concerns, finding alternative solutions to the Malibu Lagoon Restoration Project, and individually districting the city of Malibu from Los Angeles County.

Sibert, the only incumbent candidate in the election, placed second in the election with 1156 votes. Sibert prioritized “the environment, fiscal discipline and public safety” in his campaign, despite being the subject of other candidates’ attacks regarding his approval of the original Malibu Lagoon Restoration Project. Sibert holds a M.S. In Chemistry from the South Dakota School of Mines and Technology and a Ph.D. from the University of California San Diego. He claims his experience and background in science will be vital for a balanced community dialogue regarding the safety of the Malibu Lagoon Restoration Project.

House is a returning City Council member, now having officially won her fourth election with 1037 votes. She has served three previous terms with the Malibu City Council since the city’s incorporation in 1991, two of which prior to the imposition of term limits in 2000 limiting a council member to only serving two terms. House is a 37-year resident of Malibu and insists on community involvement in decision making. House told Malibu Patch upon announcing her decision to run for one of the available seats that she hoped to preserve Malibu’s natural and cultural resources, build a reserve budget and remodel the Michael Landon Recreation Center at the Malibu Bluffs Park.

All three candidates built their campaigns around a ‘listen to what the people want’ strategy that, coupled with experience and community seniority, they hoped would win them the seats. Official announcements and final votes will be announced later tonight. 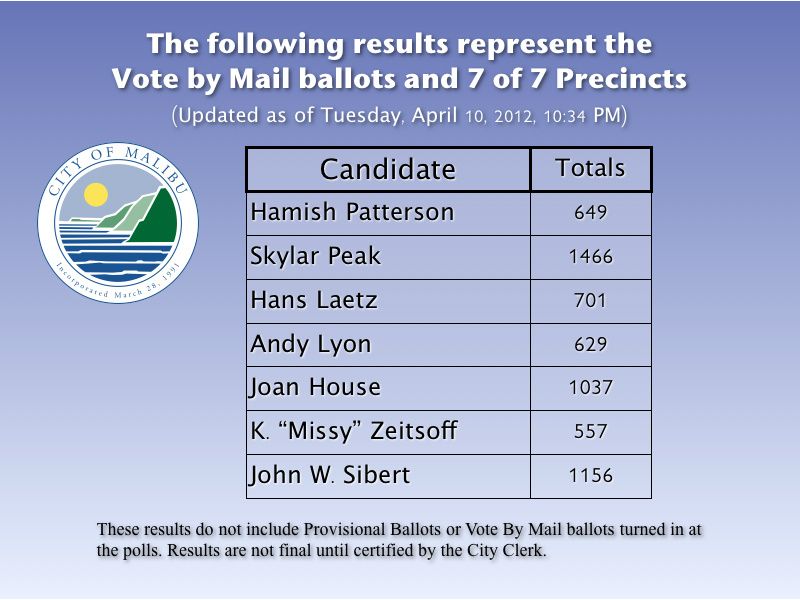 The polls have been open for seven hours and seven candidates are vying for three seats. The seven candidates running are Hamish...
Copyright 2013 Jupiter Premium Magazine Theme
Back to top