The Le family gathers on the hill above Drescher Graduate Campus during sunset. Junior Garrett Le said every member of his immediate family attended Pepperdine, and he felt proud to carry on that legacy when he received admission to the University. Photo courtesy of Garrett Le

Every year, Pepperdine admits approximately 4,000 students to Seaver College — but for about 200 students, Pepperdine was already part of their family history.

Roughly 5% of Seaver College admits each year are “legacy admits,” or students with alumni family members, Director of Admissions Ashley Nguyen wrote in a Feb. 4 email to the Graphic. This number is significantly less than that other colleges’ classes of 2024, such as Harvard University, where legacy admits make up 31.3%, and Santa Clara University, where out of 1,474 first-year students, 259 — or 18% — are legacies.

Those with familial ties to the University, such as junior Garrett Le said their memories of Pepperdine began long before they started college.

“There’s such a community aspect of Pepperdine, and it really does make you feel at home,” Garrett Le said. “Growing up with students always all around me, I always felt […] like family in so many different ways. I wanted to continue that, I wanted to be a part of that and I wanted to share it, and it’s my own way of bringing people into my family.”

All Pepperdine applicants use the Common App, and there is a box legacy students can check in that process, Nyugen wrote. There is no preferential consideration of legacies, Nyugen wrote, but the number of legacy admits at Seaver College remains around 200 annually.

Pepperdine’s Office of Institutional Effectiveness releases an annual report ranking admissions considerations. The 2020-21 documents show some of the most important factors are character, GPA, application essay and religious commitment. Alumni relation is “considered” but not “important.” 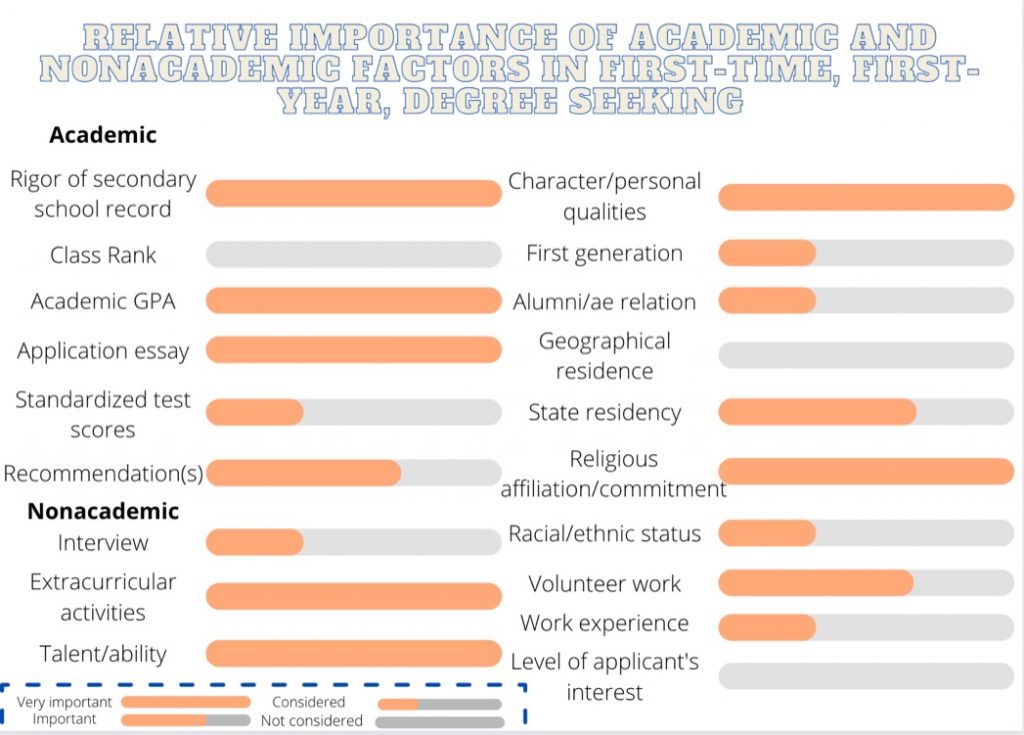 Some legacy students said their family members played a major role in their decision to attend Pepperdine. Still, junior Jacob Moonen said he wanted to earn acceptance on his own merit, so he limited mention that the majority of his maternal family attended the University.

“There was one [question], ‘What drew you to Pepperdine?’” Moonen said. “I think I mentioned that my family had gone here, but I definitely never reached out to Alumni Affairs.”

The Office of Alumni Affairs welcomes potential legacy admits, and, at times, are given more in-depth campus tours, wrote Avesta Carrara, Alumni Relations office manager, in a Jan. 31 email to the Graphic. Still, all applicants must meet the same academic and personal standards — such standardized test scores and GPA criteria.

“When the Office of Admissions is considering all student-applicants they are really looking for all students to be well-rounded with multiple interests (sports, music, church, community and the like), in addition to good grades, faith-oriented and one that will have a nice understanding and acceptance of the University mission,” Carrara wrote.

Legacy students bring a sense of warmth and familiarity to campus, further cultivating the community Pepperdine prides itself on, Carrara wrote.

“We hope the next generation’s experience will mimic the previous generations’ connection, heart and love for this place,” Carrara wrote.

Moonen said his maternal grandfather, Bill Henegar, worked at Pepperdine for 34 years as vice president of Public Affairs and contributed to the development of Heroes Garden. His mother, along with most of his uncles, aunts, great-uncles and cousins, attended too.

Although he grew up in a Pepperdine family, Moonen said he would have ended up at Pepperdine no matter what due to his commitment to his faith and love for the location.

“It was the only college I ever visited and was familiar with, and so knew it would be on my radar my whole life,” Moonen said. “But during junior year of high school when it came to actually starting to apply and look into things, I definitely felt like I had options — I didn’t feel any pressure or anything to go here — things just fell into place here.”

As much as he said he loves exchanging stories of student life at Pepperdine with his family, Moonen said it is also important not to live in the shadow of those who preceded him.

“I feel like I’ve plugged myself into different areas than they did,” Moonen said. “And, obviously, the world’s a lot different than it was 25 years ago when my mom was here, so I definitely feel like I’m carving out my own experience.”

Hung Le is a Seaver College alumnus (‘87) who has worked at Pepperdine since 1990 and moved on campus in 1993. Hung Le is now the University registrar.

“Orange and blue are our family colors,” Hung Le said. “I believe in what we do, who we are and there are few things in my life that I love more than Pepperdine.”

Hung Le met his wife, Corrine, at Pepperdine and they got married on campus. All four of their sons grew up in on-campus faculty housing, and Hung Le said he always shared the ways in which the University furthered his personal, spiritual and professional growth with his family.

“I see the incredible growth that my wife and I got to experience here,” Hung Le said. “And then, having been here for so long, I’ve been able to experience that growth alongside our students. I see what a powerful impact that is. So, naturally, I wanted our children to have that experience.”

Garrett Le, the youngest of the Le family, said seeing his father’s passion for Pepperdine and growing up on campus made him want to continue the legacy from a young age. When it came time to apply to colleges, he put all his faith into his dream school.

“I did only apply to Pepperdine,” Garrett Le said. “It was early action, so I knew that even if I didn’t get in, I could apply to other places after that, but I had my heart set on Pepperdine. When you grow up in a family like mine, you realize all those good things Pepperdine has to offer.”

His whole life, Garrett Le said he attended the University Church of Christ, which drew him to Pepperdine even more. He said he also wanted an experience that resembled that of his parents, which he always heard stories about throughout his upbringing.

Hung Le said the beauty of legacy students is the memories they keep alive and the stories they retell. Pepperdine, Hung Le said, feels like a big family because of the family that returns generation after generation.

“We get to share these experiences that we lived through,” Hung Le said. “And they’re not just stories, they are real life experiences. I hope that inspires them [legacies] to make good life experiences to add to the fabric and to the story of Pepperdine.”