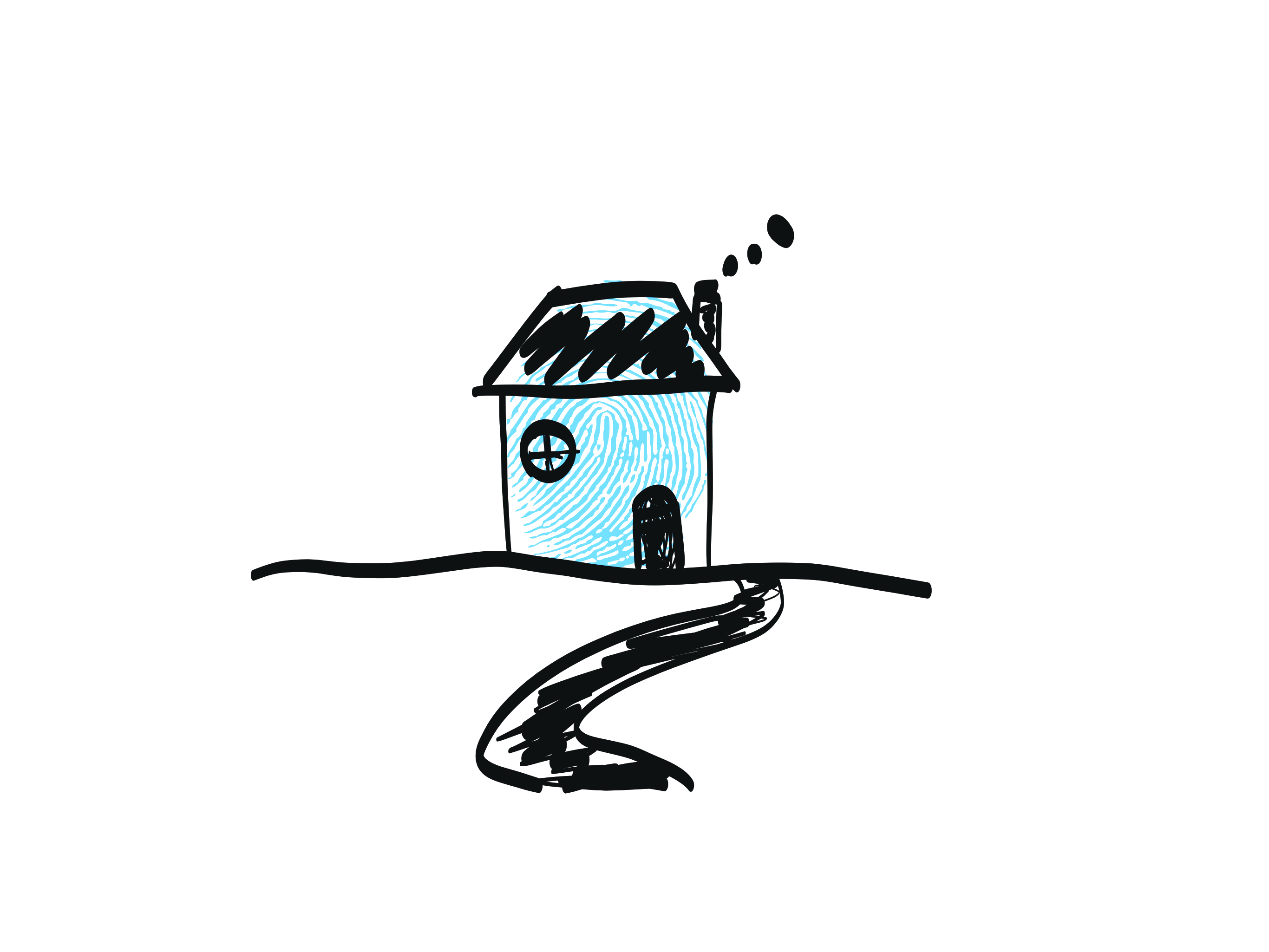 Once, at a club convo, I was asked to participate in an interesting spiritual exercise. I was asked to draw a picture of a house, which represented God, and myself in relation to that house. It was essentially a creative way to express where we were at in our relationship with God and with faith in general.

After everyone was finished, we were given the opportunity to share our pictures with the group. Very few people had drawn themselves inside the house. Some were on a path to the house. Others were touching it or on the front steps but not fully inside. Even those who were inside often showed themselves looking out the window, curious about what everyone else was doing. There was a general theme of struggle, of not being fully content with their faith.

My picture expressed a different kind of struggle. I drew my house with a white-picket fence surrounding it, and myself on the sidewalk, walking down the street in front of the house, a casual observer.

As I explained my drawing to the group I realized that my picture represented something different from theirs. It did not show my relationship with God or any personal journey with faith; instead it was a perfect metaphor for my experience as an atheist student at Pepperdine.

When people find out I am not religious they often ask how I ended up at Pepperdine and whether or not I regret it. The answer is complicated.

Looking back at my four years here I would have to say I genuinely enjoyed my college experience. I got to study abroad in London twice, I’ve gotten to know my professors on a personal level, and of course I’ve loved soaking up those ocean views. Given the choice, I think I would choose Pepperdine again, although that’s not to say it hasn’t been without its hardships.

In simple terms, I am an outsider here. I am on the other side of that fence, and that barrier is always between me and the other students, although I am often the only one aware of it.

At Pepperdine there is an unspoken assumption that everyone is Christian, or at least has a faith of some kind. I know many students appreciate this aspect of Pepperdine. They can talk about their spirituality openly and grow in their faith as part of a community.

But this assumption makes it unnecessary to ask someone what they believe before talking to them about it, as would normally be the case on a secular campus. This puts those of us who believe something different than the majority in an awkward position.

There have been times when someone will know me for months before finding out that I am an atheist. They are always shocked and unsure how to respond. They often seem somewhat betrayed, as though I had been lying to them this whole time. Once, after it came out during a discussion in a religion class that I was an atheist, one boy came up to me afterward and apologized that I had been “outed.” As if it was some big secret. In fact, I am quite open with my views. As a result of Pepperdine’s Christian culture, people had assumed that I was religious without ever asking.

This is so common that when meeting new people I am often unsure how to proceed. I am tempted to avoid awkwardness later by being as upfront as possible. But it’s not like I can just go around saying “Hi, I’m Michaela, and I’m atheist.” Besides, who in their right mind would want to point out the thing that makes them an outsider right away? Things are a lot easier if I am the only one who is aware that a barrier exists.

However this invisible barrier not only isolates me from the Christian students, but from the non-Christians as well.

There are actually quite a few people on campus who are at least not very religious, if not fully agnostic or atheist, but because of the Christian school atmosphere and the overarching assumption that everyone fits into that Christian template, most of them tend to lay low like me. It’s a catch-22. In speaking about my beliefs I separate myself from the group, but the only way I can find people like me is to speak out.

Don’t get me wrong, I’ve made plenty of friends here, and most of them are more than willing to have open discussions about faith and my lack thereof. But I’ve also been met with a surprising number of misunderstandings as well.

Many people see my atheism as a temporary thing. They think I am lost or rebelling or “ignorant to the truth” and that I will eventually come around in the end. They either see me as an opportunity to evangelize, or they dismiss my views as the kind of struggle with faith that so many of them go through.

They don’t realize how incredibly insulting this is. I am not an atheist because I am confused or lost. I have heard a lot of good arguments for and against the existence of God. I’ve been to church, sat through all different kinds of services, I’ve read the Bible, I’ve studied it, and I’ve read the Christian philosophers.

This is something I’ve spent an inordinate amount of time thinking about, and I’ve got plenty of arguments to back me up, so to dismiss my views by saying I just “haven’t seen the light yet” shows a complete disregard for my beliefs and insults my ability to reason, which is something I take a lot of pride in as a philosopher.

Consider it this way. Wouldn’t it offend you if I told you that you didn’t need Jesus in your life? That you are just temporarily confused and that eventually you’ll see that God is a lie? But I would never say that to anyone because I believe they have rational reasons for believing in the existence of God. It’s one thing to disagree with a person’s point of view and another to dismiss it completely.

Another remark I’ve heard a lot, especially in religion classes, is the idea that life without God would be completely lacking in morality or purpose.

The field of ethics still exists completely independent of the Bible. I am no heathen acting on base instincts without regard for those around me. And when it comes to purpose, I have no problem finding meaning in my life. In fact I think I struggle with it less than many Christians who, as that club convo exercise showed, often struggle in their faith.

I find irony in the idea of an existential crisis, because as an existentialist myself I believe my life has import because I’m in it. I do not feel forlorn, nor do I feel despair. I am neither cynical nor depressed as existentialists and nihilists are commonly stereotyped to be. My life has meaning to me, I choose its purpose. I am the god of my own life, so to speak, and that is an incredibly empowering feeling.

But aside from these misunderstandings and a general sense of not fully belonging, my Pepperdine experience has been a good one, if not an ideal one. Many of my friends said they would never go to a super liberal secular school because they would be miserable there. Well, after my time at Pepperdine, I would argue that putting yourself in a place that is out of your comfort zone and that challenges you to defend your views instead of just echoing them is one of the best things you can do for yourself. Not only will you become more confident in your own beliefs, you might realize that the other side has a point or two you agree with as well.

I could have gone to Reed College in Portland. Their motto is communism, atheism and free love. Students smoke and drink openly on campus, strip naked when the sun is out, sleep together in co-ed dorm rooms, and are never subjected to letter grades.

They were my top choice, but something drew me to Pepperdine (probably the large scholarship and good weather), and I’m glad I changed my mind. I stand out here, and it’s in that kind of environment where you learn the most about yourself, as well as people who are different from you.

Pepperdine was not meant for atheist students, and I was not meant to go to a Christian school, but hopefully we’ve both grown for the better because of it.