The Dolphins and Browns somehow validated themselves despite losing to the Chiefs and Ravens, respectively.

The Chargers, Bengals, Texans and Falcons joined the Jets and Jaguars as teams eliminated from playoff contention. Teams including the Panthers, Cowboys, 49ers, Lions, Broncos and Patriots are mathematically alive but nearly guaranteed to miss the playoffs.

The Chiefs, Saints, Packers and Steelers have all clinched playoff spots, but the Saints dropped a head-scratcher to the lowly Eagles and face the Chiefs this week, opening the door for the Packers to seize control of the NFC’s top seed and only playoff bye. Similarly, the Steelers ceded the AFC’s top seed to the Chiefs with a loss to the surging Bills.

The PGM picks race tightened back up, with Assistant Sports Editor Paxton Ritchey and Staff Writer Kyle McCabe leading the way with a 12–4 record this week, while Sports Editor Karl Winter and Photo Editor Ali Levens dropped back with 9–7 weeks. It seems destined to be decided in the playoff rounds.

“It’s a short week for the Chargers to come back from the emotional high of finally paying forward some of their bad luck surplus. I don’t trust the unpredictability of the Raiders in a non-normal week, and the Chargers remembered how to win. I’ll ride with them again.” — Paxton

“I don’t trust the Chargers yet. Jon Gruden is good against the division. The Raiders are super inconsistent, but they didn’t even play terrible against the Colts; they just ran into a buzzsaw. […] The Chargers defense is nothing compared to the Colts. Josh Jacobs is on, like, 70% health, and he still had 75 total yards [against Indianapolis], which could be a lot more against the Chargers.” — Austin

“Our offense from last week and defense from the Chiefs game could combine to be a good team. Hopefully that happens on Saturday as Drew Lock plays for his job.” — Kyle

“Josh Allen has been nails lately. The Broncos’ defense has played better but is still pretty banged up. With the Steelers having a game against the Colts remaining and the Bills getting that head-to-head win, I think they favor themselves to get up to the No. 2 seed and have an easier path. Their defense hasn’t really convinced me yet, but their offense has. […] They need a little bit more on defense to make a deep playoff run, but they’ve got enough to stop Drew Lock and the Broncos.” — Karl

“Cowboys are in the hunt for the division, and it’s the last few weeks of the season — which means choke time.” — Justin

“The Seahawks are better than the Football Team, but I’m feeling optimistic about picking underdogs this week.” — Kyle

“With Alex Smith going down, I’m just not convinced enough in the Washington offense to get the job done. They needed two defensive touchdowns to beat a Niners team that is poor on offense. As good as that defensive front is — and maybe they have a chance to make things interesting in the playoffs, they’re the favorites in this division — I’m going to take Seattle here. Seattle gets their confidence back; yeah, it was against the Jets, and yeah, everyone knew they were going to win, but putting together a complete performance on offense was what they needed to do. They’re going to stay alive in their division here and make sure that game against the Rams in Week 17 is for the division. They can’t really afford to drop this one since the Rams are playing the Jets this week.” — Karl

“Against the Bucs, the Vikings had more rushing yards, more total yards and dominated time of possession — but they have Dan Bailey, and that’s a bit of an issue. […] They still look good. I don’t think the Vikings have a weak spot on their team necessarily. O-line is good enough, Cousins is good enough, the receiving duo is solid [and] Dalvin Cook is top-five. I feel like there are a couple of position groups or, like, an offense or defense in the NFL that people always just assume that they’re good. Both of these teams’ defenses are always like, ‘Oh, they’re good, right?’ The Seahawks’ defensive backs the Rams D-line and stuff like that — because they’ve been good for so many years — to associate them with being good. I hope I’m not doing that with the Vikings’ defense and overvaluing them. Baker [Mayfield] has the cycle, and Mitch [Trubisky] also has a cycle. It’s probably more of a flowchart, but there’s no way he has anywhere near the game he had against the Texans, who have a historically bad defense, whereas the Vikings, it’s OK.” — Austin

“I was hoping this would happen because that means I’m in the minority in picking the Bears, which always bodes well for me. I live and die by them. They have pulled me in enough that I’m going to pick them this week, because I’m clinging on to that playoff chance. Back in Week 10 [against Minnesota], Nick Foles played quarterback for us and played super poorly in that game. Trubisky has played some bad teams, but as a general rule, he has been a better quarterback for us all year. He adds a dimension that Foles doesn’t have. The [Bears’] defense got back on track last week, and they stuffed Dalvin Cook the first time we played them. We can do that again and leave the game in the hands of Kirk Cousins, and I don’t think he’s going to be able to put together the performance that he was able to in Week 10 because the Bears’ offense just went three-and-out so many times that he had a million possessions. We’ve been really healthy all year — that’s been one of the most positive things. Akiem Hicks is playing for our D-line this week, so we have all our guys, so I like the Bears.” — Karl

“The Dolphins are the most improved team in the NFL this season. I believe they are in a great spot to snag a wild card.” — Justin

“Shoutout to the Jags for putting my boy Gardner [Minshew] out there. But at least Lamar [Jackson] has the decency to go to the locker room. The Jags poop their pants right on the field.” — Paxton 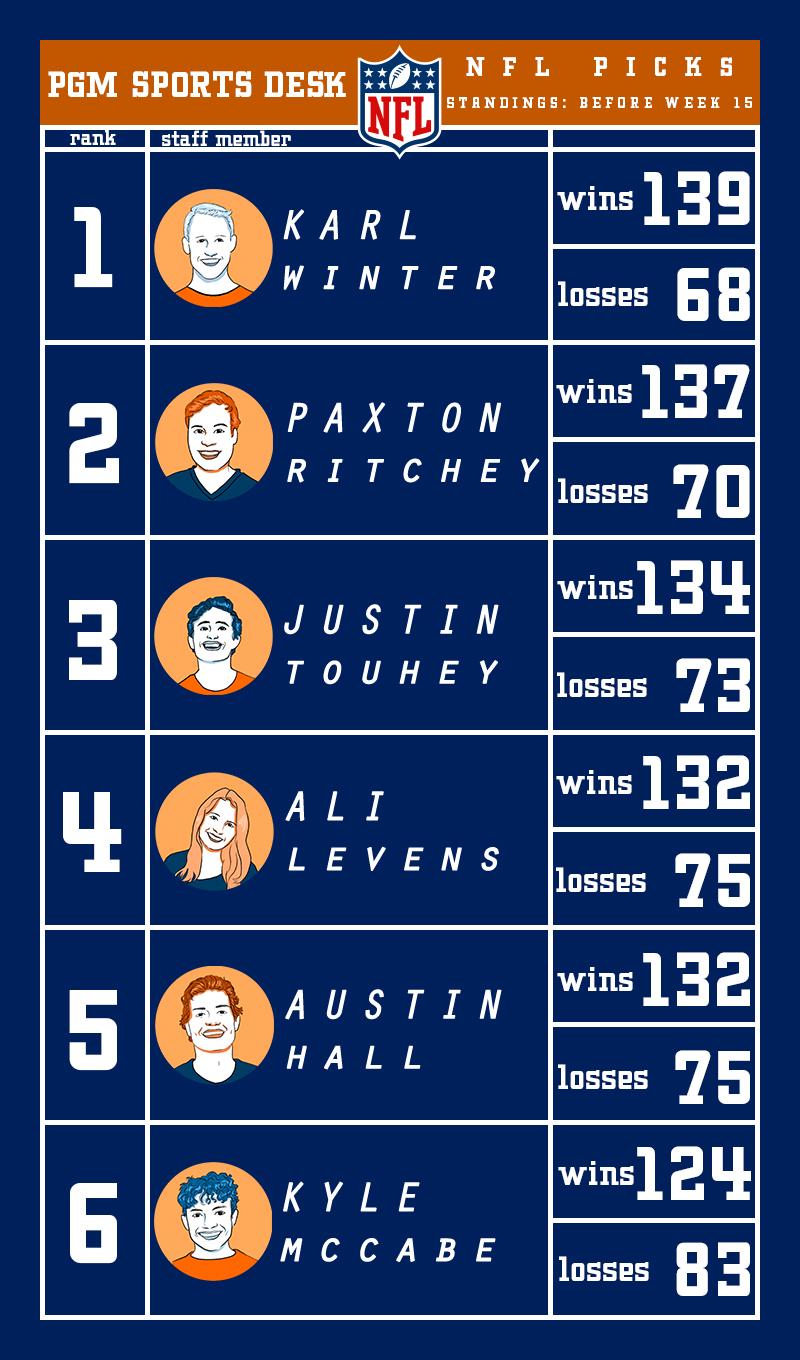 “I’ll go with the obvious choice of the Bucs. They’re just a much more well-rounded team. The Falcons don’t have consistency; they don’t have anything to play for. The Bucs are actually contenders in the playoffs, and it’s definitely crunch time, so they’ll bring it.” — Ali

“It would be hilarious if the Lions continued to play well enough to talk the Fords into letting Darell Bevell be a permanent head coach. The Titans will do the Lions’ fan base a huge favor by blowing their team out of the water.” — Paxton

“[The Texans] let me down two weeks ago in this matchup, but I’m feeling generous, so I’ll give them another chance.” — Kyle

“An extremely interesting AFC South playoff picture is happening. I think the [Colts and Titans] will be tied in the last week of the season.” — Justin

“The Eagles got a lucky win [last week]. I don’t trust them as far as I can throw them.” — Justin

“Adam Gase is also kind of a good-looking guy, so I can’t even go that route again, but he’s just such a loser. When the Rams had a bye or something like that, Sean McVay’s Instagram model girlfriend yelled at him, like, ‘Are we going to do anything on your day off but sit here and watch RedZone?’ And he said no, which I thought was kind of funny. How is that a news story? McVay is a tool, but he’s a good coach, so I’m going to go with him.” — Austin

“The Saints use a hybrid game plan of Drew Brees and Taysom Hill to stymie the Chiefs’ defense, and there will be just enough 6-yard Hill runs, 5-yard [Alvin] Kamara passes and 7-yard [Michael] Thomas slants to keep Pat from State Farm off the field. Colossal game — should be a fun one — but Saints will be motivated after last week and desperate to stay in the hunt for a bye that the Chiefs likely get even if they lose this one.” — Paxton

“I totally get the reason for concern for the Chiefs because they’ve won the last five by single digits, and those teams were the Panthers, the Raiders, the Bucs, the Broncos and the Dolphins. […] There were just moments in that Dolphins game that whenever they needed before a fourth-down conversion or special teams play or defensive stop, they got it. […] After the Raiders beat them in Week 5, they might as well have hosted them the Lombardi Trophy right then and there. I don’t see them losing from here on out, unless [Andy Reid] benches everybody in Week 17. People are entertaining the possibility of [the Chiefs] not winning out. There’s no way to lose this game. I wasn’t super convinced [in the Saints] when Brees was playing. When offense is moving, they were getting everyone involved, the play action game was working — but the other 50% of the time, when Michael Thomas was out, they were only throwing the ball to Alvin Kamara, and Drew Brees was struggling to throw the ball farther than five yards, almost like Philip Rivers. I don’t think he’s going to be 100%. What is a 40-something-year-old quarterback who’s at 70% [health] going to look like against the Chiefs, whose defense is way better than it was last year? It might not be the prettiest thing, but when [the Chiefs] need to make a play, I have no doubt in my mind they’ll be making the play.” — Austin

“[The Browns’] run defense certainly didn’t look good last week. That offense is firing on all cylinders — it’s very hard to stop that run, and Baker’s been playing really well recently. This is as good of a team as the Browns have had since they became an expansion franchise. The Giants are certainly not going to be able to gash the Browns’ defense like the Ravens did because they’re just not nearly as talented in the run game. While I don’t think the Browns will put up 42 because the Giants’ defense has been solid, it’s difficult to keep up with the best running team in the league who also has a quarterback that has looked very capable and solid as of late. It’s a crowded AFC at the top, so [the Browns] need to keep winning.” — Karl

“The Bengals, man. They’re rough. This is definitely going to go back to the Steelers feeling their superiority complex. This will carry them for the rest of the regular season and probably through a couple of the playoff games.” — Ali