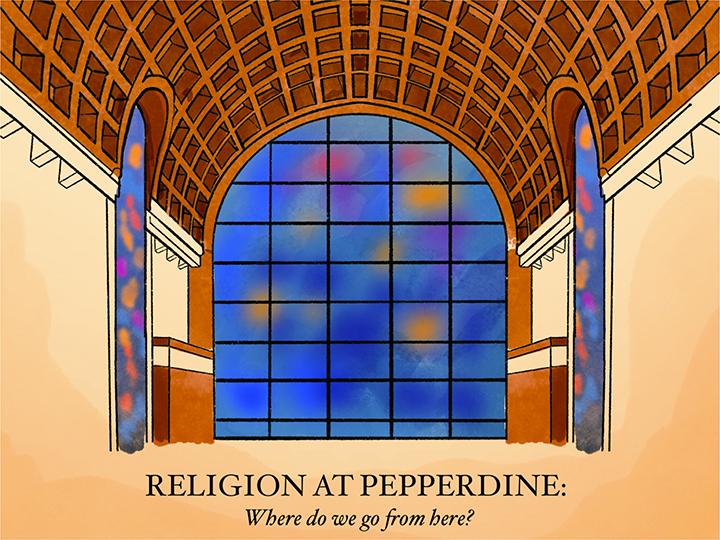 Art is by Madeline Duvall

Of the approximate 5,300 universities in the U.S., nearly 600 are Christian-affiliated institutions. This means about one in every 10 colleges in the U.S. is a Christian university.

While religion plays a major role in American culture, a growing trend of religious skepticism rising in the U.S. leaves some Christian-affiliated schools with outdated structures and practices. In the coming years, Pepperdine should consider altering its policies that come with its Christian affiliation to improve the community and the experience among its students.

Forty-eight percent of college students surveyed at Pew Research Center said religion was “very important” in their lives. Still, religion trends overall are on the decline. The number of U.S. adults who described themselves as Christian when asked about their religion shrunk by 12% in the past 10 years, according to 2018 and 2019 telephone surveys. On the flip side, those who are not religiously affiliated — including those who identify as atheist and agnostic — is now up 17% from 2009.

If this declining trend continues, the U.S. will be majority non-Christian by 2035. While this might sound alarming to some Christians, the U.S. is only catching up to many other developed nations. Most nations with similar economic statuses to the U.S. have a much larger population of non-religious people than in the United States. In the U.K., 52% of the population is non-religious, and 67% in China.

If the number of Christians continues to decline in the U.S., Pepperdine could soon become predominantly non-religious. While some might assume Pepperdine students have a skewed religious perspective, only 53% of Seaver students identify as Christian.

Surprisingly, the percentage of Christians at Pepperdine is actually lower than the percentage of college graduates who identify as Christian from all U.S. universities. Sixty-six percent of U.S. college graduates identify with some sort of Christian faith — 13% higher than Pepperdine’s numbers, according to Pew Research Center. Further, the Christian population of Pepperdine is much lower than the total U.S. population, which totals a whopping 70.6%.

Since only around half of the current student population identifies as Christian, it is essential for Pepperdine to find out why. The Pepperdine Board of Regents should consider how to shape the direction of their policies and determine which ones will best reflect the students who attend the University.

Pepperdine does not require its students to be Christian; however, those who attend the University must complete a variety of Christian-centered requirements before graduating — attending weekly chapels and completing Religion courses. Students must study the Old and New Testament as well as an additional Christian course of their choice.

It is possible that the reason why the number of Christians at Pepperdine is lower than other U.S. universities is because of these religious requirements. Studying the Bible and learning more about Christianity could cause some students to realize they don’t agree with it. Religion courses might also make the Bible seem more like a textbook rather than God’s word, which could result in students becoming less inclined to read it on their own.

Pepperdine should rethink its Christian policies, especially since certain ones have already gotten the University into trouble with its students in the past. In November 2019, the Freedom Wall was filled with anonymous notes both defending and denouncing bringing Chick-fil-A, an openly anti LGBTQ+ organization, to campus. This sparked controversy over Pepperdine’s stance on LGBTQ+ issues. Further, 52% of students polled said they disagreed with the article in the Student Code of Conduct that states sexual relations are only acceptable between a married man and woman, according to a 2019 Graphic survey.

If nothing else, Pepperdine could maintain its Christian foundation while modifying its religious requirements. For example, students have no say in two of the three required religion courses. Pepperdine could create a more flexible array of courses so students can choose aspects of faith they are more interested in learning about — or even provide the option to take courses that teach a variety of religious world views other than Christianity.

If students are picking religious classes more tailored to their specific interests, they will more likely enjoy what they are learning and want to continue to learn it outside of their classes.

Pepperdine has a significant responsibility to understand the religious views of its students and how to better foster a community that is only 53% Christian. If religious trends continue to decline, then the University should eventually rethink its Christian affiliation altogether.